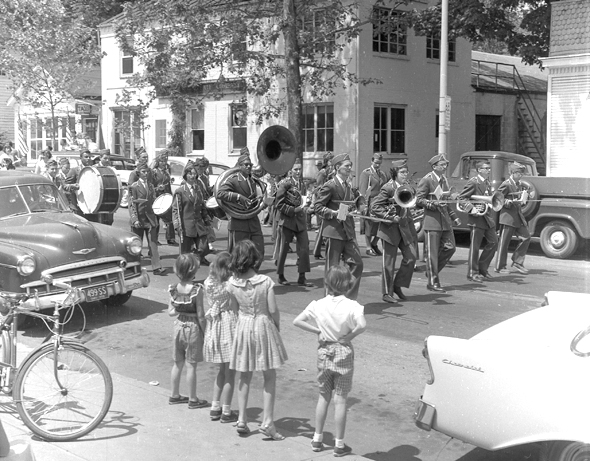 The 1958 Memorial Day services included the traditional parade through downtown Yellow Springs to Glen Forest Cemetery. Here, the parade marches North up Xenia Ave., past a two story painted brick building — what was then the Antioch Bookplate Company, and is now the home of Toxic Beauty Records, Jennifer's Touch and Bonadies Glasstudio.

Wendell Grimes of the Legion served as master of ceremonies and school superintendent R. E. Augspurger gave the principal address. A Legion firing squad fired a salute to the war dead and trumpeters from the Bryan band played ‘taps’ to end the day’s ceremonies.

Mr. Augspurger set the tone for his talk as he quoted from Abraham Lincoln’s “Gettysburg Address,” “It is rather for us, the living, to be here dedicated to the great task remaining before us … for which they gave their last full measure of devotion … that government of the people, by the people and for the people shall not perish from the earth!”

“If Lincoln were alive what would he say is that task?” asked Mr. Augspurger.

“Woodrow Wilson called World War I a struggle to keep the world safe for democracy,” he recalled.

“Franklin Roosevelt, after Pearl Harbor, said ‘the true good we seek … a world which will be safe for our children … Liberty under God.'”

“Each of us … must help … to free ourselves from … belief that war ever settles anything.”

Technical assistance, hospitals, schools are effective ways of sowing “seeds of understanding and faith in which some day the seeds of war will no longer germinate,” Mr. Augspurger went on.

“We shall push forward slowly toward the dawn of a brighter day.”

Topics: , Memorial Day, news from the past