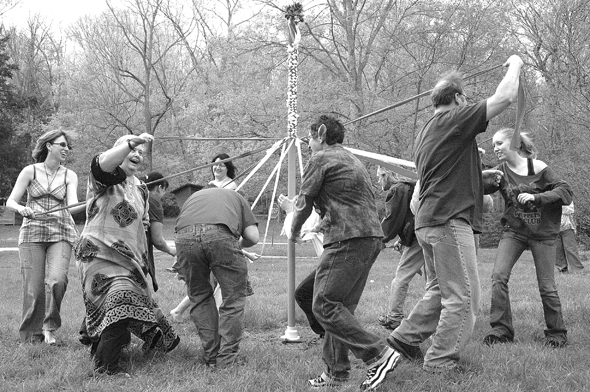 About 20 people from Yellow Springs, Columbus and Cincinnati celebrated the pagan holiday of Beltane on May 1, 2011, at John Bryan State Park, with activities that included a maypole dance. The event was sponsored by the Church of the Living Earth, an ecumenical pagan group from Columbus. (Photo by Diane Chiddister)

Mystery dinner set. “All Yellow Springs residents are invited to participate in ‘Guess Who’s Coming to Dinner?’ as either host or guest. … The event sponsored by African American Cross-Cultural Works, or AACW, will be a mystery dinner of sorts, with hosts not knowing in advance who their dinner guests will be, and guests not knowing who will host them.”

Grandmothers to meet. “The second gathering of the Grandmother Spirit Council will be held Sunday … in the art gallery of the Senior Center. Grandmothers or any women with grandmother-like roles are invited to gather for mutual support and discussion.”

Maypole dance. “Yellow Springs residents looking for a colorful way to celebrate spring are invited to a traditional Maypole Dance, Sunday … at the ‘triangle’ at East Davis and Livermore streets.”

Glass Farm plans. “Village Council agreed recently to commit a portion of the Village-owned Glass Farm to a development of affordable homes.” (See “50 years ago’” below.)

Plans to dredge Ellis Pond appear ‘dead in the water.’ “The Village since the beginning had been having difficulty keeping the spring-fed pond dry [in order to dredge it], in large part because its elevation did not allow for gravity-assisted drainage.”

Heavy rains cause messy problem. “A wet basement during periods of heavy rain is a bothersome fact of life for many Yellow Springs residents. Some who live in the newly built Kingsfield neighborhood, however, have an additional headache: they have not only water in their basements, but raw sewage.”

Glass Farm plans. “The Yellow Springs Planning Commission Monday night … discussed plans of the Yellow Springs Diversified Housing Corporation to build ‘cluster’ housing on the Glass farm off Fairfield Pike and King Streets.” (Yes, that was 50 years ago — see “25 years ago” above.)

Walter Anderson. “The appointment of the first [Black] member of the teaching faculty at Antioch College was announced today by College officials. Mr. Walter Anderson, now director of music at Karamu House in Cleveland, has accepted the chairmanship of the department of music at Antioch.”

Mills Lawn plans. “Members of the village council will seek to learn the wishes of local citizens before deciding what action to take on the year-old offer on the part of Antioch College to deed Mills Lawn to the village … [Antioch] President Henderson emphasized that the college had attached ‘no strings’ to the offer beyond a desire to know the general plan the village might have for the use of the Lawn and to specify that some general civic use should be made of it, including, probably, some use as a park.”

New college president wants village sewer system. “The address of President Arthur Morgan of Antioch at the A.M.E. Church drew forth a large audience. This was the first appearance of Mr. Morgan here and people were anxious to learn from him what the plans for Antioch are. … He also intimated that a sewerage system in town would be a valuable asset to the college. He has already engaged a number of teachers who will come from towns having modern conveniences and it cannot well be expected that they will come here and be satisfied without them.”

Mrs. Cordell and Mrs. Wingo. “The Welfare Club was entertained last Thursday at the residence of Mrs. Warren Cordell. Following the business meeting, a two course luncheon was served by the hostess. The club adjourned to meet next with Mrs. Albert Wingo.”