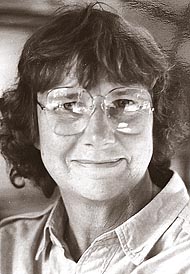 Ruth Hameyer King, formerly of Yellow Springs, died on May 10, 2021, at 88 years of age, in Wells, Maine. Ruth and her husband, Louis, lived for 33 years in a house they designed on Grinnell Circle on the edge of the south Glen, where they happily raised their five children.

Ruth was brought up in Queens, N.Y., the eldest of German working-class immigrant parents. Her father was a builder, founding his own successful company, and her mother was a cook and housekeeper. Ruth and her younger sister, Margaret, were children of their times, being enthusiastic supporters of FDR’s democratic policies and the First Lady’s progressive social agenda. As a young woman, Ruth was a participant in Eleanor Roosevelt’s Encampment for Citizenship and was active in The Ethical Culture Society, which she’d attended since she was a young child. Both of these involvements instilled in her a strong dedication to an inclusive and just world. Ruth was accepted into the High School of Music and Art in Manhattan — now the High School of Performing Arts — attending from 1947 to 1950, and in her senior year was elected president of her class.

She chose to attend Antioch College for her undergraduate studies, planning on a teaching career. There she met her husband-to-be, Louis King, — fully four times before he remembered they’d been introduced previously. After a 1953 Bucks County, Pa., wedding, officiated by Antioch’s Morris Keeton, they moved to the Detroit area, where her new husband had a teaching position in the Ferndale schools. There, her first child, Douglas, was born. While in Michigan, she completed her Bachelor of Arts degree in education at Wayne University, now Wayne State. Then, after leaving Antioch just two years earlier as a student, she returned to Yellow Springs as a faculty wife when Louis was hired to be principal of the Antioch School. For several years, they rented one of the two tiny tin houses available to faculty at the foot of Marshall Street, where candles melted on window sills in the summer heat and frost formed on inside walls in the winter. After several more years, the growing family included two daughters, Sari and Lisa.

In 1959, their home on Grinnell Circle was completed, and in 1962, it was featured in the Dayton Daily News for its unusual Japanese-style cabinetry and its naturalistic stonework. By 1964, there were five kids, with the final additions of Aaron and Peter. Antioch students were always welcomed out to the King’s for Sunday breakfasts and found both Ruth’s pecan waffles and the lively topical conversations worth the hike out from campus. At this time, though primarily parenting, Ruth was active in the League of Women Voters as well as participating in Faculty Ladies Teas and local and regional political actions. She hosted many lively dinner parties and holiday events, and — always a voracious reader — Ruth kept herself abreast of the current literature in educational and political thought.

In 1967, Louie took a sabbatical at NYU to earn his doctorate while Ruth earned her master’s degree there in educational psychology and completed her doctoral coursework and exams in anthropology of education. The family lived on the eighth floor of a newly built faculty-housing high-rise in Greenwich Village. With five young children in tow, it was a crowded and stimulating two years, rich with memories -— a chance for Ruth to expose her rural Ohio children to the city life of subways and museums, arts and culture, and the Ethical Society of her childhood. Civil rights demonstrations, political assassinations and Vietnam protests all took center stage during these turbulent years. The eldest two children accompanied Ruth to the October 1967 March on the Pentagon, the first national protest against the war.

When they returned from NYC, Ruth was hired as an assistant professor of education at the newly opened Wright State University, and Louis resumed teaching at Antioch — there was a lot of shop talk in the house. Ruth’s involvements were more varied as her family grew: Gourmet Club, Better Health Co-op, gardening, mystery novels, professional conferences and, eventually, European travel, as she was the first Wright State professor to take students abroad for workshops. Spring breaks for four years were popular exciting adventures, traveling with students to study British primary schools, making new friends and developing new programs.

Always an innovator with a keen eye for ways to better the lives of her students, and their students in turn, Ruth instigated popular programs and experiences within the division. She allowed no shortcuts, nor did she take any, carefully reading each one of the many student papers she assigned, providing rich, reflective feedback, and asking her students to think for themselves and to form their own opinions, rather than parroting back what they had heard or read. She launched a very successful accelerated program for older students who had degrees in other fields and who wished to become K–12 teachers. She was part of a team working out of Stanford University that developed guidelines for portfolio evaluation as a component of the National Teacher Exam. She led workshops in problem solving at Wright-Patterson Air Force Base, in dramatic re-enactment thematic-immersion learning in conjunction with Antioch, and other techniques and subjects as inspiration and funding permitted. Her creativity flourished in classrooms as she understood the value and necessity of gently moving people out of their comfort zones to expand their thinking.

Respected for her progressive ideas, motivated work ethic and dedication to students, Ruth was elected division director in 1982 by her colleagues, despite not having completed her Ph.D., and still being an assistant professor. She very much enjoyed the extended responsibilities, and her rank was raised to associate professor.

Near the end of her 22-year professional career, Ruth and Louie took students to Brazil for a semester. They then traveled by themselves through South America, exploring the Andes, Lake Titicaca, Falls de Iguazu, and took a scientific cruise in a very small six-cabin boat down the Amazon and Rio Negro.

Ruth retired from Wright State in 1990 and, after a final holiday gathering of the whole family there, the Yellow Springs house was sold. She and Louie moved to Hilton Head Island in South Carolina where they had friends and where they remained politically active in numerous ways throughout their retirement years: marching against the Confederate flag over the capitol, organizing workers on Daufuskie Island, working with the MLK Day Committee and service projects, organizing an ACLU chapter on the island and serving on the State Board, co-founding Hilton Head for Peace, initiating a Women-in-Black anti-war vigil group that assembled every Saturday for over a year, organizing a thriving Democratic Club with over 300 members, etc. Ruth wrote and produced the monthly eight-page Donkey Bray, the club newsletter, for 10 years, building the circulation to 1,700 homes. She spoke up for election reform, labor rights, racial justice, environmental stewardship, the dangers of corporatocracy, the importance of a single-payer medical plan for all, pay equity, a strongly independent and free press, disarmament and strengthening our social institutions at every opportunity. In these efforts, the Kings made many very dear friends and were delighted with their life in the low country.

In addition to keeping politically busy, Ruth and Louie enjoyed traveling to explore the world: cruises with friends, political cruises, visiting in San Miguel de Allende, Mexico, a 50th-anniversary tour through Alaska’s inside passage with their expanding family, trips to Europe with Ruth’s parents, and a family history tour Ruth organized for herself, her daughters and their daughters, camping and adventuring through Germany and Austria. When in her mid-60s, Ruth finally agreed to take a cruise in their small cabin sailboat with Louie — a lifelong sailor — through the Canadian wilderness islands of Georgian Bay and the North Channel in the Great Lakes, resulting in wonderful stories of rocky pine-studded archipelagos, aurora borealis nights, gale-force storms and sunny private coves for swims.

After Louie died in 2009, Ruth continued to be active with the Unitarians and to enjoy her island life while taking many trips up to her Lake Huron cottage in Michigan to visit with children and grandchildren who gathered there to be with her. At her request, Lisa helped her sell her home in 2013 and moved her into a lovely apartment at TidePointe on the island, a retirement community she and Louie had chosen years before, where she lived happily and socially for five years, evacuating for hurricanes, as necessary. When the time came that she needed to be in a care setting, Sari, having just retired, moved her up to Maine where she and her husband could attend to Ruth in her declining years.

Ruth leaves behind her a legacy of progressive activism, a full and satisfying career, five grateful children and their spouses, 11 grandchildren and eight great-grandchildren; Douglas King and Betsy Higgins, of Florence, Mass., and their daughters, Shani (Calif.), Iris (Ariz.) and Grace (Calif.); Sari and Saul Lindauer, of West Hollis, Maine, and their children, Ona (Mass.), Sam (Penn.) and Gaelyn (Maine); Lisa and Scott Palmer, of Oregon City, Ore., and their daughters, Norah (Mich.) and Roslyn (N.Y.); Aaron King and Jolene Beitz, of St. Paul, Minn., and their son, Henry; Peter King and Lissie Fein of Florence, Mass., and their children, Oliver and Phoebe; three beloved nieces and a nephew and their families; and a cousin, Klaus Hameyer and his wife, Eileen, in Burlington, Vt. She was preceded in death by her sister, Margaret Dearden, in 1967. Ruth also gifted current and future generations of her family with her lively inspiring memoir, “A Sentient Life,” and with her love of singing, art and cooking.

Her passing brought the family yet closer, and we all miss her powerful and loving presence among us. Later in life, when asked if she had any advice for right living, Ruth had this to share:

“Remember that much of life is accidental. We are born into a specific family, at a specific time and we don’t have much choice about that. Because of this accident of birth we have possibilities and handicaps. We each have to take those and do the best we can with them. If you are fortunate to have been born into a family that has love and comfort and intelligence — remember that these are gifts and you do not automatically deserve them. You only deserve them when you give of yourself to others who are less fortunate. That could have been you. Make the most of your possibilities and in turn live your life so that your children can learn to love, too. Good luck.”