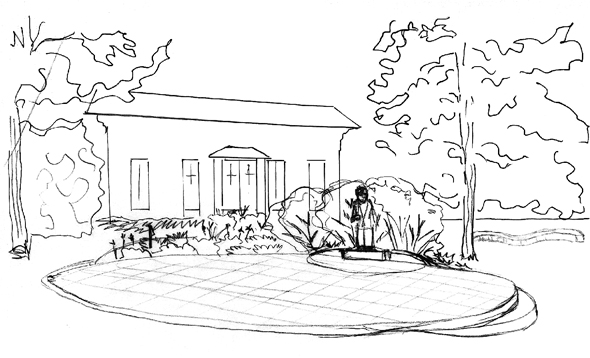 A site design for for the Wheeling Gaunt sculpture installation at Hilda M. Rahn Park was presented to Council on Monday, June 21. (Illustration by Nadia Malarkey; drawing not to scale)

After three years, the Wheeling Gaunt sculpture is nearing completion. Anticipating a September unveiling, Village Council heard about plans for the sculpture’s placement in a downtown park at its June 21 regular meeting.

Council previously approved the siting of the life-sized sculpture of the famed 19th-century local philanthropist at Hilda M. Rahn Park, located at the corner of Dayton Street and Xenia Avenue.

This week, Council heard more details about the proposed sculpture park. Gaunt will be placed atop a platform erected on a large pad of pavers, surrounded by benches, with native trees and other landscaping added.

In total, the budget for the site work is estimated at $35,000. However, no financial requests were made of Council, and the matter will be discussed at a future meeting.

Cheryl Durgans, project manager for the Wheeling Gaunt Sculpture Project, was one of several committee members who presented the design to Council. She said the project has taken “24 months and one pandemic year,” but its end is now in sight.

The sculpture is currently being bronzed, and is expected to be complete in August. Meanwhile, the sculpture committee is on the home stretch of a nearly $200,000 fundraising campaign, with the goal of raising a final $25,000 on a GoFundMe site.

As for the sculpture’s placement, “it’s not about plunking something down; it’s about doing it with intention,” Durgans said. To do so, a 13-member site committee broke into two sub-committees, one focused on landscape/art and another on narrative.

Local landscape designer Nadia Malarkey told Council that the landscape/art subcommittee started by brainstorming the feelings they wanted the site to evoke, terms that included “a sense of history,” “sacred,” “welcoming,” “reverent,” and “inspirational.”

Malarkey described Gaunt as a formerly enslaved man “who had so much magnanimity and love that he gave away, and had joy, even though he had so many troubles.”

“We really wanted Mr. Gaunt to be the centerpiece, a very powerful placement,” Malarkey said of the design.

As such, Gaunt will be placed atop a small pedestal on which a quote attributed to him — “Not what we have, but what we share” — is inscribed. The pedestal will be at the rear of an oval-shaped “hardscape” made from triangle pavers invoking a Freedom Quilt motif. Freedom Quilts were used during the time of the Underground Railroad, with various patterns used to signal instructions to Black people escaping enslavement.

“Let’s lay a quilt at the feet of Wheeling Gaunt, and that will be the quilt that welcomes everyone to this community,” Malarkey said of the idea. “It’s a fleeing from oppression, from hatred, from lack of kindness.”

“This will be the space where people can gather for quiet contemplation, reflection,” she added of the site overall.

On the front part of the site, four trees will be planted to create a “portal” toward Gaunt, with witch hazel shrubs situated behind him, Malarkey said. The flagpole and a large stone honoring Yellow Springs citizens who served in WWII are slated to be moved to another area of the park.

The Gaunt sculpture could be the centerpiece of the park and the first of a series of “art pieces and sculptures continuing down a pathway coming down to the Bryan Center,” Malarkey added.

“There could be opportunities for other community members, cultures, civilizations, to be able to place their mark and contribute to what makes up our town,” she said.

The budget for the sculpture originally included $6,000 for site work, but that is less than will be needed to complete the design, committee members said.

In response, Council President Brian Housh said he was glad that benches were part of the design and requested a “one-pager” laying out the expected costs.

“As you know, you have the in-kind support [from the Village]. The monetary piece is a little more challenging, but we’ll talk about it,” Housh said.

Village Manager Josué Salmerón added that the Village has already relocated a gas line on the property in anticipation of the changes needed to accommodate the sculpture.

Committee members said they would return to Council with a budget breakdown at an upcoming meeting.

To donate to the sculpture project, visit: https://www.gofundme.com/f/gbg7f-wheeling-gaunt-sculpture-project.

Other items from Council’s June 21 agenda will be in next week’s News.