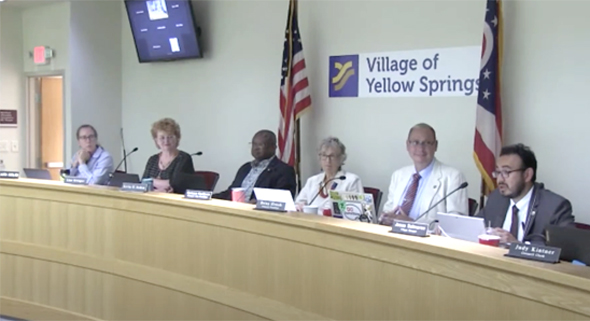 A video still of the July 6 regular Village Council meeting.

At its regular meeting on July 6, Village Council unanimously approved the creation of a local building department.

Two ordinances — one for residential permits and the other for commercial — were passed as an emergency. At its previous meeting on June 21, Council voted 3–1 on the measures, but since it was an emergency ordinance, it required a supermajority of at least four votes.

At the July meeting, Council heard from a local business owner and an architect about their struggles with the Greene County Building Department, which currently approves construction projects.

From the floor, Dino Pallotta of Dino’s Cappuccinos implored Council to create the department, saying the village “can’t kick the can down the road anymore.” He described the “hoops” he has had to jump through when seeking a county building permit, and its impact on the village.

“It was ridiculous for these small projects the delays [I had],” Pallotta said. “When I’m delayed, I can’t get my project done. I can’t make revenue, and that means tax dollars to you.”

Local architect Max Crome, who is working on several large building projects, including those spearheaded by comedian Dave Chappelle, added his concerns about the county department. Among the benefits are that Yellow Springs is “able to respond to our particular needs and particular economic development priorities,” such as by prioritizing some projects over others, he said.

Crome added, “I would happily pay three, four, five, even 10 times the fees to save a month, or two months or, in recent cases, six months of waiting on Greene County to respond to what our needs are,” citing delays on some of his local projects.

Village Manager Josué Salmerón also argued in favor of the local department, highlighting problems with the county. Salmerón said that even if the Village contracts back with the county, it would give the Village a “level relationship” and a “voice at the table.”

“We can ask for things like basic customer service and proper responses to applications, which currently are things we are not getting,” he said.

Salmerón added that he recently met with a group of downtown merchants and found their challenges with the county building department “heartbreaking.”

“They are being put through a very burdensome process with little guidance and little customer support,” he said.

In response to a question from Council member Laura Curliss, Salmerón said that permit fees may have to increase to cover the Village’s administrative costs to run the department. Asked at the meeting if they would pay more for local services, Pallotta and Crome both responded in the affirmative.

Over the last seven years, fees collected by the county for local projects came to an average of $31,668 annually for about 190 projects per year, according to county figures. Salmerón said that’s not enough money for the Village to hire its own building department staff; they intend to contract for the service of providing plan reviews and inspections.

Council Vice President Marianne MacQueen said she was supportive in part because Village staff was.

“I feel that staff has asked for this. They feel they need it. I have confidence in the staff if they feel like they can do it,” she said.

“We field a lot of questions, we make phone calls,” Burns said. “We have staff time that we are not recouping anything for now.”

Village Council member Kevin Stokes said that there is little risk to starting a building department, and much potential reward.

“The businesses want it, the staff wants it. Being small and nimble, there are advantages to that,” he said of a local department.

However, Curliss raised several potential risks, including that the county may not accept the Village if it decides to return to county services at some point in the future.

Council member Lisa Kreeger said she didn’t think the department would be revenue-neutral and asked to see actual rate sheets to see how much the Village could lose. She also responded positively about having “local control” over projects.

“I feel that the village of Yellow Springs is at a really positive tipping point, I feel we have a tremendous opportunity right now to re-invent the village, and this might be a positive,” she said.

Council will consider ordinances creating local codes and fees at a future meeting.

Council read three ordinances amending the zoning code. It was the first reading, and no vote was taken. Planning and Zoning Administrator Denise Swinger suggested the changes, two of which relate to extending the length of time for which a conditional use approval or variance would be in effect from 12 months to 24 months. Swinger said the extension was needed as applicants often have difficulties getting the required surveys, building permits and completing their projects in that time frame.

Swinger also suggested two changes to the section of the code related to transient guest lodging establishments, or TGLs. In one, Planning Commision could deny a conditional use permit for a TGL if it is within 500 feet of another TGL, as measured from the closest property line to the closest property line. Swinger said the commission previously did not have a clear understanding about how many TGLs in a certain neighborhood could be considered too many. By comparison, a city block is around 300 to 350 feet in length.

Two final changes would require TGLs to designate a smoking area on their property that is at least 15 feet from all property lines, and for all non-operator occupied TGLs to have commercial insurance, since they are “operating them as a commercial enterprise.”

Council passed 4–1 an emergency reading of an ordinance to allow Council and other public bodies to hold remote meetings past the expiration of the COVID-19 pandemic state of emergency. Curliss dissented. Council made the change using home rule powers after a statewide measure to allow remote meetings expired at the end of June.

Village Solicitor Breanne Parcels said the current hybrid in-person-remote meeting model “has been demonstrative of village values in terms of inclusiveness, being able to attend remotely due to a disability” and may also encourage more candidates for commissions.

According to the new language, the entire public body may participate remotely as long as the public is allowed to gather in a physical meeting place. For public hearings to take place, at least one member of a board or commission must be physically present. The public must be notified whether the meeting will be held in-person or remotely.

Council unanimously passed the second reading of an ordinance that amends the section on weeds and vegetation on local property. The measure adds a new category, “managed natural landscapes,” made of native grasses and plants, which don’t have to comply with height requirements of other plantings, as long as they don’t impede sidewalks or sightlines. However, villagers are not allowed to “let their yards go” and must also pull a variety of noxious weeds and not let turf grass exceed nine inches.

From the floor, resident Mitzi Miller expressed concern about the removal of a five-foot buffer between a managed natural landscape and a neighbor’s property. In response, Nadia Malarkey, a landscape designer who helped draft the ordinance, said any neighbor issues should be addressed using mediation.

• Village Manager Salmerón gave an update on the creation of a municipal broadband network in Yellow Springs. He announced that the Village received a $300,000 grant from Broadband Ohio in partnership with the Yellow Springs Schools and Miami Valley Educational Computer Association, or MVECA, an information technology provider. The next phase of the project will see the offer of broadband service to 162 homes and businesses in the downtown area.

• Council considered a request from Home, Inc. for $12,000, which will be used as a match for a $200,000 USDA grant that would provide money for local homeowners to make major repairs, including weatherization upgrades. Council briefly discussed where the funds would come from, with various sources proposed, such as the affordable housing fund, the greenspace fund and the lodging tax proceeds.

• Council approved a five-year lease with Yellow Springs 4 Season Farmers’ Market LLC for $1 for the use of a Bryan Center parking lot for the weekly farmers market. The lease was passed as part of the consent agenda at the June 21 meeting.