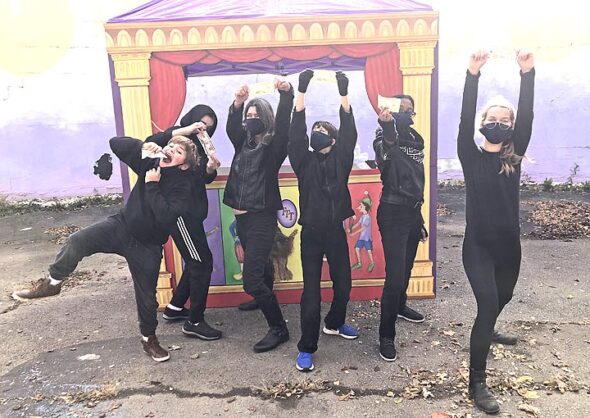 Members of YSKP’s 2020 production of “The King Stag,” which was broadcast on Channel 5, celebrated their accomplishment last year with crisp $50 bills, a stipend that YSKP gave each of its actors. From left: Edwin Harrah, Josh Simon, Jennifer Johnson, Elliot Simon, Ciara Scarver, Zan Holtgrave. YSKP is currently casting for a new show, which will include live actors and puppeteers. (Submitted photo)

A man builds a time machine and travels through the centuries. It’s a premise that has long fascinated audiences. But what happens when the time traveler arrives in a world made unrecognizable by climate change?

Celebrating its 27th year, the Yellow Springs Kids Playhouse will explore a world decimated by climate change in its performance of “The Time Machine,” by H.G. Wells. The show is currently being cast and will premiere this fall.

YSKP founder and creative director John Fleming is basing his script on the 1960 screenplay of “The Time Machine,” written by David Duncan. The time traveler will learn the history of the planet through 3D magical rings. Puppeteers will help tell the story of the world that has been transformed by a global apocalypse brought on by climate change.

“This is a great work to introduce the concept of using both live actors and puppets. I think that there will be some interaction between the two, but we will flesh that out as we rehearse and work through production,” Fleming said.

The use of hand-held puppets is fairly new to YSKP, having begun with last year’s production of “The King Stag,” which was produced during the pandemic. Fleming and other creative directors are collaborating with Tristan Cupps of Dayton to make both 2D and 3D puppets for “The Time Machine.”

“The puppets and live actors will share the stage. Some of the lead characters will appear in both versions in the story,” Fleming said.

Using hand-held rods, performers will animate the puppets across a set designed for YSKP by Bob Swaney. The stage itself is a feat of design, with a floor that rotates so that viewers can see the differences between the above-world of the Eloi and the underworld of the Morlocks.

“We do have a few changes,” Fleming said. “I am giving the Morlocks dialogue to make it more fun for the actors to play.”

According to Fleming, taking on “The Time Machine” will challenge participants to consider what our world will look like if we don’t address the current climate crisis.

“I believe the kids are aware of the crisis and want to find a way to address it,” Fleming said. “I’m excited about the story and how it really does tie in to global issues.”

“The Time Machine” has traditionally been read as an analysis of class conflicts. The two groups of inhabitants, the Eloi and the Morlocks, represent clashing classes of people. While the Eloi enjoy a life of simplistic beauty, the Morlocks are forced underground, only emerging at night when they hunt the Eloi in order to survive.

YSKP’s production will focus on the time traveler’s reaction to Earth’s drastic change after the climate disaster.

“I want it to be overwhelming to the characters and to the audience as they watch the time traveler, the Eloi and the Morlocks grapple with the new world,” Fleming said.

Formerly a summer arts camp, YSKP is transforming into a year-round production company that will be open to children from both the village and the surrounding area. Participants will learn the basics of performance while working with puppets, building sets and participating in other tasks that will give them a well-rounded experience in the world of theater. Because of the sustained time commitment, participants will receive a $100 stipend.

“When we gave the kids their stipend last year, the feeling of pride and ownership was palpable. Many of the kids hadn’t held a $50 bill,” Fleming said.

The addition of a stipend began with the 2020 production of “The King Stag.” Observing the lengths that participants were willing to go in order to put on a good show — learning puppetry, attending rehearsals via Zoom and working with over-dubbing technology so that the show could be streamed — Fleming decided to compensate them for their time.

After several years of planning and changes, YSKP has found a workable solution that will make the idea of a traveling theater company a reality.

“The original concept of the Table Top Theater was just too cumbersome, but we are resilient; now, the rotating set allows for a really cool split-screen effect, and allows us to be more mobile,” Fleming said.

The sets are moveable, and designed so that they can work in both indoor and outdoor settings, allowing for year-round productions.

Because of complications with the pandemic and regulations for live performances, YSKP’s production of “The King Stag” exists as a 28-minute video, which aired on Community Access Channel 5 last year and streamed on YouTube. Fleming is collaborating with WYSO to air the performance as a radio drama.

“‘The King Stag’ reminded me of everything bad about 2020, so I’m excited to move on and start fresh with “The Time Machine,” Fleming remarked.

Grand plans are in the works, according to Fleming, but the date for the first performance is yet to be set. Casting is underway and open to interested children between the ages of 10–15, who will need to fill out a form on the YSKP website. Rehearsals will begin in August with a planned premiere in Fall 2021. The season will consist of 10 shows that will run in both indoor and outdoor locations through June 2022.

“We are still in the process of casting the 10 roles, so stay tuned for a formal announcement of our first performance. We can’t wait!” said Fleming.

For more information visit http://www.yskp.org or contact Fleming at flemo.jf@gmail.com.