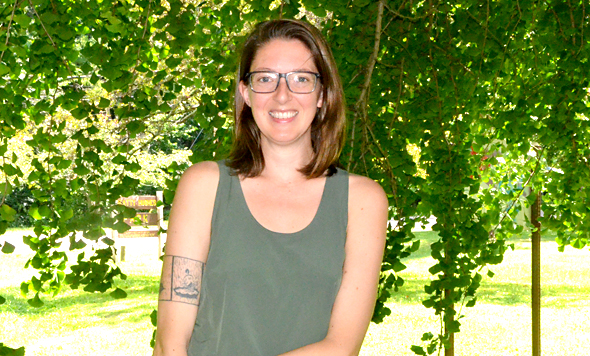 Clifton resident Piper Fernwey was contracted to draft a Climate Action and Sustainability Plan for the Village of Yellow Springs. (Photo by Megan Bachman)

Piper Fernwey worked at colleges and companies across the midwest developing farm-to-table programs and climate change responses. At Denison University, she helped the cafeteria source 40% of its food locally.

Now, the Clifton resident is tasked with drafting a Climate Action and Sustainability Plan for the Village of Yellow Springs.

Already a green leader, Yellow Springs could benefit from a coordinated plan to bolster its environmental efforts — and image — Fernwey believes.

“To people in the community, we are on par, or beyond other places,” she said in a recent interview. “But because of our lack of comprehensive planning effort and communicating all that to the rest of the world, we look behind.”

Plus, having a plan could lead to grant opportunities, partnerships between local nonprofits, and more efficient local utilities, according to Village Manager Josué Salmerón, who supports the effort.

“In Yellow Springs we talk a lot; when it comes to doing, we have a disjointed strategy,” he said.
Nevertheless, much has been accomplished in the village, Salmerón added: the recent Wildlife Habitat Community designation, grassroots efforts to recycle #5 plastics and an electricity portfolio with 80% renewables.

The planning effort kicks off next week with a community meeting on Monday, Aug. 23, from 1–2:30 p.m. on the lawn of the John Bryan Center, followed by an online meeting from 6:30–8 p.m. via Zoom.

At both meetings, Fernwey will share her approach to the community-based plan, gather input and explain how villagers can participate in the process. To join the online meeting, visit: zoom.us/j/3555457065.

Fernwey emphasizes that the plan will be rooted in the community and rely on committees and subcommittees of villagers to lay out current efforts and brainstorm new ideas.

“It’s a community-based plan for the village of Yellow Springs, and everyone is a stakeholder,” she explained. “The government alone isn’t going to solve the climate crisis.”

Council approved a $25,000 contract with Fernwey in July to complete a draft of the plan by the end of 2021. She was one of two people who responded to a Village request for proposals after the Environmental Commission recommended a paid plan rather than one drafted by volunteers. Previously, Fernwey was an alternate on the commission and advised the group on how to go about climate action planning.

Fernwey brings a decade of experience in climate action work to the endeavor. After graduating from Case Western Reserve University in Cleveland with a degree in biomedical engineering, in 2011, she started working for Bon Appétit, traveling to colleges across the country in a car running on waste veggie oil, to help them reduce their carbon footprints and green their cafeterias.

Later Fernwey coordinated local food procurement for Denison University for the company and was promoted to a Midwest leadership position, helping educational institutions and companies plan and execute sustainability plans. But she was laid off at the start of the pandemic, which led to a reappraisal of her life and work.

“I had a freak out moment, losing my career of a decade,” she said.

Landing in Clifton, Fernwey bought some property there and is in the process of turning it into the Clifton Co-op Crafthouse. She helped draft regional food systems and composting grants for Agraria. And she joined the Village Environmental Commission as an alternate, all while unemployed.

Salmerón joked that Fernwey is “the busiest unemployed person I know,” while she said she merely wanted to get involved with her new community by using her “passions and skill sets.”

While at the Environmental Commission, Fernwey was tapped to advise on the creation of a new Climate Action and Sustainability Plan. The commission previously produced a Quarterly Climate Action Report, spearheaded by Duard Headley, but was looking to do something more comprehensive.

“I saw that there was so much happening in the community,” Fernwey said. “We’re not starting from scratch, we just need to look at the work being done and put it under one umbrella.”

Other past efforts to inform the new plan are the Village Comprehensive Land Use Plan, finished in 2020, and the 2019 Active Transportation Plan.

The new plan will include a handful of action steps to prioritize, and will look between five and 10 years into the future. It will be organized around seven “domains,” and incorporate five community values, Fernwey explained.

Regarding the values, Fernwey said they will help guide which strategies the community should pursue. For instance, if Yellow Springs increases the number of electric vehicle chargers it offers, which undoubtedly benefits higher income people, does it balance that effort with car or bike shares?

Across the domains, there are many opportunities for Yellow Springs to cut its carbon footprint and create a more “livable, vital, resilient community,” in the words of Fernwey. There could be new home energy weatherization incentives and a more robust farm-to-table distribution network.

Tourism, meanwhile, is both a challenge and opportunity for the town’s sustainability, Fernwey and Salmerón believe.

Yellow Springs’ green features are already a draw — witness the flocks coming to hike in the Glen — and could be more so with additional local food offerings and more environmental education, Fernwey says.

In the end, the goal is to help Yellow Springs become a more sustainable community in line with its values. If the village could see some of its ideas through, possibilities abound.

“There are so many opportunities here,” Fernwey said.