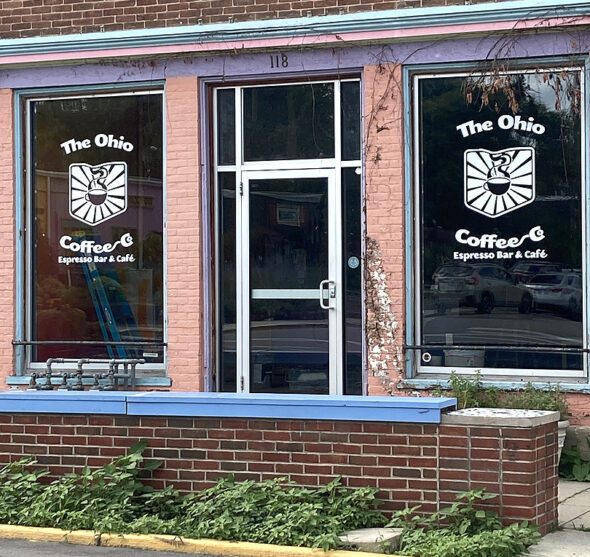 Currently under construction, the Ohio Coffee Co. at 118 Dayton Street will feature regional roasters and a bakery that makes dog-friendly treats. The grand opening will be scheduled after the space passes county health inspections, possibly later this month. (Photo by Jessica Thomas)

Coming soon to the village is Ohio Coffee Co., a coffee shop, espresso bar and bakery that caters to the whole family — including members with four paws.

Owner-operator Angelo Caliguiri is excited to return to the village and to offer a different experience from the current options in town. While an opening date has not been set, Caliguiri hopes to open the shop some time in August with the help of a small staff. To start, the shop will be open from 8 a.m. to 8 p.m., but hours may be adjusted according to community needs, Caliguiri said.

A familiar face to some in the village, Caliguiri grew up in Bath Township and graduated from Fairborn City Schools. After spending a lot of his formative years visiting Yellow Springs, he coached girls and boys soccer at Yellow Springs High School for several years until 2009 and worked as a bartender at Peach’s in the early 2000s.

Caliguiri currently manages the Sports­PleX in Enon, a business that he has been a part of since 1996. He worked concurrently as a barista and front-of-house manager at the Ohio Coffee Co., which formerly operated in Fifth-Third Center in downtown Dayton before being replaced by Phebe’s Cafe in 2019. Caliguiri left Ohio Coffee Co. for a full-time position at SportsPleX, but he has always wanted to open his own coffee shop. Caliguiri declined to comment on the acquisition of the name and logo for Ohio Coffee Co. from its previous owners.

“After leaving Ohio Coffee Co., I frequented the different coffee shops in Dayton and the surrounding area, and I really enjoyed the environment. It’s always been in the back of my mind to have my own shop,” Caliguiri said.

True to its name, Ohio Coffee Co. will feature selections from coffee roasters hailing from Dayton, Columbus and Cleveland. While some roasts will be standard in the shop, others will rotate in order to introduce roasters from different regions throughout Ohio.

“My intention for the company is to support the Ohio coffee community,” Caliguiri said.
Ohio Coffee Co. will also offer a selection of sandwiches, soups, smoothies, Italian sodas, and affogato, an Italian dessert featuring a scoop of gelato or ice cream with a shot of espresso poured over the top.

On the bakery side, the shop will feature a selection of cannoli, cookies, cakes and other pastries. A unique feature of the bakery is that all of the recipes for baked goods will be dog friendly, using organic ingredients, peanut butter, and carob, a dog-safe chocolate substitute.

“That’s our niche; everything will be dog- and human-friendly,” Caliguiri said.

Caliguiri’s new vision for the space will bring new life to the location, which formerly housed the Spirited Goat Coffee House. The Spirited Goat, owned by villager Michael Herington, shut its doors on Dec. 3, 2020, after receiving a warning from local police for violating the Ohio’s mask order for business owners and employees. Herington declined requests for comment about the closure of the business.

According to Caliguiri, he and Herington knew each other from working around the village and visiting each other’s coffee shops. Caliguiri remarked that while he purchased coffee-making equipment from Herington, the Ohio Coffee Co. has no affiliation with the Spirited Goat.

“Knowing my background, he [Herington] asked me if I was interested in the current space. It was almost like the stars aligned for me,” Caliguiri said. “I’d been looking at other spaces in Dayton, but it just seemed right for me to take this chance.”

Walking into the space, patrons will notice some significant changes. According to Caliguiri, the space hadn’t had any major updates in 20 years. Deep cleaning, new flooring, a fresh paint job, and upgrades to equipment are underway in order to bring the space up to code. The stage that formerly hosted performances is gone, allowing for an expanded bakery space and additional seating.

Future plans for the space will include book readings for toddler and school-age children, a home base for dog-friendly 2K runs, and other community-oriented events. Caliguiri, who has a young son, also wants to open the back area of the shop as a community space where small events can be held.

“As much as I’m aware of the necessity of tourism, I’m excited to make this a family-friendly space where villagers and visitors can watch our kids grow up,” Caliguiri said. “We want to be a focal point off of the bike path.”

Caliguiri reflects that while he has a strong sense of direction for the business, he is open to input in order to tailor his business to the needs of villagers and the wider community.

“Really, the whole concept will be an open book. We look forward to receiving suggestions and getting to know our ­neighbors.”