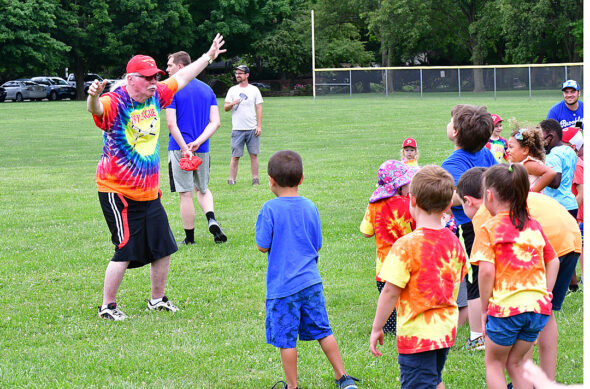 Coach Jimmy Chesire engaged a small army of tie-dye clad T-ballers in pre-game warm-ups on Friday, July 9. The iconic activity is in its 36th year under Chesire’s leadership and tutelage, as past participants now bring their own children to play. (Photo by Kathleen Galarza)

Aiden Scott, 4, played like a boy with a lot of experience, but did he play two years ago in 2019 when he was 2? Is that how he got so good?

Josie Boyer, 3, her light-red colored hair falling about her ears, touched her rosy cheeks and ran, raced to first base like a bank robber fleeing the scene of a crime.

Evelyn Schmidt, 5, the thoughtful and careful player that reminded me of a staid businessman in a ’50s movie, was electric on Friday, which was mud ball night in T-ball. She stepped up to the tee, where I had a gang of remarkable helpers working with me in Riley Saubey, 8, Amandine Bouquet Saber, 7, and her good friend, Antonia Varandani-Smith, 7. I took a second to talk to Evelyn’s dad, Jacob, and — wham! — Evelyn smashed a low-to-the-ground line drive, a serious baseball hit! Jacob and I were delighted and a little bit amazed.

Zaria Triplett, 7, who said it was OK to call her “Z,” was a fine young athlete. She was strong and confident with a bat, smacked the ball quickly off the tee, and ran gracefully, swiftly, to first base where her dad, Chris, was coaching.

Erin Fink came later, the all-day rain and thunder causing her mom — and most of us — to have doubts.

“Will we play? With all this rain?”

Shiloh Deal, 4, with his mother, Jennifer, taking pictures, was like an old pro. He’s been here before — last week. He knew what to do — from last week — and he did it: wham! He swung, and that ball was out of the park!

Cameron Richeson, 8, comes from a family of athletes. He was again — as he was on our opening night — a terrific home-run batter and fleet-footed runner. The remarkable distance between a 2-year-old and an 8-year-old is like the distance between your driving downtown and some billionaire sending himself into space in a rocket he paid for himself.

Abilene “Billie” Althaus, 2, came to bat for the very first time in her life. These are precious, sacred moments that perhaps only a parent will remember, but we tried to be soft and sensitive. Here was another toddler thrilled, doing some remarkable thing no one in her world had ever thought of: “Here, take this large, longer-than-you, polished wooden stick, and go up to the jet-black tee standing over there in the midst of all those people.”

Amandine, Antonia, Riley and I were standing near and around that hollow black tube whose top stood as high as Billie’s eyebrows.

This small darling actually hit the ball and we sent her — showing her, leading her — to first base — a phrase that means nothing to a 2-year-old. Almost none of these toddlers had any idea what a base was, let alone a first base. Blllie’s mom, Christine Liparki Althaus, was there, following her child, so all was well with Billie, safe on first base.

Her brother Julian, 4, was in the same boat, only his plight was complicated by his name.

His mom saved me, articulating his name syllable by syllable: “Jule-lee-anne.”

Theo Schmidt, 3, came to the plate four or five times. He was bright, he understood what we asked him to do, holding the bat just so, looking at the ball the whole time he was swinging, then swinging, and when he only knocked it off the tee and it stuck in the mud like a housefly stuck to fly paper, he hit it again. Theo is patient. He managed to hoist and swing the bat and on his fifth try, his fifth swing, he hit the ball six feet in front of the tee where the ground is dry enough for the ball to roll and not get stuck like a finger in your eye.

It was wonderful to see so many people show up on Friday after a day of rain and thunder, rain and thunder. It was wonderful that it did not rain nor sprinkle nor thunder nor lightning the whole two to two-and-a-half hours that was our T-ball evening. With shoes and shorts and shirts dirty, those shoes caked with mud, we ran our final run to the light pole at
8 p.m.

And that’s our rain-soaked, muddy July 16 Perry League, Yellow Springs’ T-ball program for all kids 2–9 years of age, regardless of their race, color, creed, sexual orientation, ethnicity, spiritual inclination or practice, ability or disability. Kids can begin play at any time and there is no requirement to play every week. We’ll be out there at Gaunt Park from 6:30 to 8 p.m. next Friday, July 23, and we’d love to have you. We really would.