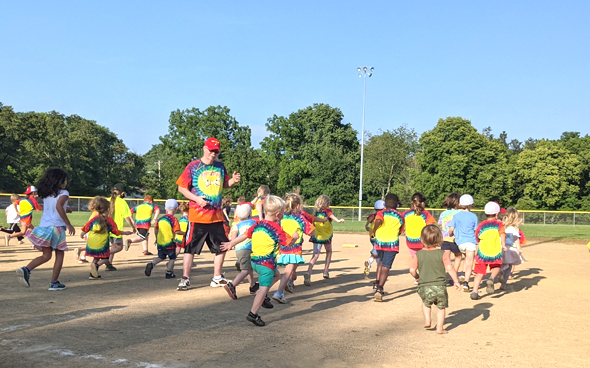 More than 50 kids showed up for the final night of Perry League for the 2021 season on Friday, July 30 — which also marked Jimmy Chesire’s final night as head coach of the beloved T-ball program, which he’s helmed for nearly four decades. Pictured here are T-ball players running after hearing Coach Jimmy’s familiar whistle, which has signaled for several generations of kids that it’s time to race to the back of the T-ball field for warm-ups. (Photo by Lauren “Chuck” Shows)

Jimmy Chesire announced in July of this year that he would be retiring from his position as volunteer head coach — and chronicler — of Perry League T-ball after 35 years. Below is his final write-up as head coach; a story on Chesire’s years leading the beloved program will appear in a future issue.

The News wishes to thank Chesire for his many summers of dedicated writing, which kept T-ball players, their parents and guardians and News staffers alike laughing and crying — and sometimes a little of both.

We awarded over 60 trophies last Friday. And we still have a few more to deliver to kids who couldn’t make it for our final night of play.

Silas Lea, 6, in his fifth year of playing T-ball, was a fine slugger, hitting well, running fast. Oscar Ebensold, 5, and his big brother Jasper, 6, were quiet, steady players, both boys knocking the ball through the gang of infielders swarming about the pitcher’s mound. Gwen Jordan, 6, had her heart broken early in the evening when she couldn’t get a particular spot she wanted on the line we formed to run back to the diamond. She wanted to stand right in front of me, which deeply flattered me, but her breaking down and crying reminded me again of how often I forget the power and depth of these children’s emotions. But she bounced back like Ella Bistline, whom I hit in the chest with my hand with a ball in it, when I swung my hand around to throw that ball, and she stepped right into the arc of my planned throw.

“Oh, I’m sorry,” I said and Ella was as still as a windless night far out to sea.

And then she started to cry softly, steadily.

“I’m so sorry. I’m so sorry,” I said, but she just continued to cry, only stopping when her dad, Mike, showed up to console her and take her off the field for a break.

Luke Miller, 7, was strong again, showing his natural and now polished skills as a batter, knocking the ball into the grasses of the outfield. Lauralai Myers, 5, not only hit well, but was keen on the bases, scooting quickly to second base when a throw to first base went awry. Hezekiah “Hezzy”

Badger, 2, was a most unique batter. Like many 2-year-olds, he wanted to hold and swing his bat in a most untoward way. We’d show him how to hold it, only to have him immediately revert to his own most unorthodox grip — he held the bat like a pool stick and wanted to poke the ball off the T with the skinny end of the bat.

Liam Jones, 5, is a reliable, regular T-ball player, one you can count on — if no one shows up, we are up the well-known creek without a paddle. Thanks, Liam, and thanks for inspiring your little brother, Rowan Kemper, 2.

These little ones are amazing. River Brevik, 2, came to bat with her loving father, Yunus. Together they managed to get her to hold and swing that giant-tree-sized stick we call a baseball bat, and by golly, she knocked that ball to the ground for a hit. Cameron Richeson, 9, in his seventh season, followed her and, together, he and I tried to get Rowan Arthur, 8, to back up.

“Back up or I’ll hit you,” Cameron said.

Good, clear advice, I thought. Rowan — or Nug-it — was nonplussed.

“That’s the whole point,” he said.

“You didn’t even hit me,” he said, running after the ball.

Oliver “Oly” Johnson-Fairle, 4, managed to get a hit even though that bat looked as heavy to him as a telephone pole would be to me. Shiloh Deal, 4, was full of spit and vinegar, happy to be at the tee, happy to hit the ball quickly and race once again to first base, past Kyle Ficke and his gang of T-ball bandits on the first base line where they were throwing balls out to the kids in the infield. Brody Bistline helped Kyle, as did Luke Miller, Fiona Garcia, 6, who is getting prettier every week, and Antonia Varandani-Smith, 7, another brown-eyed beauty with the catching and throwing skills of a much older person. Allie Amend, a very lovely 6-year-old, got her 50th hit Friday night, standing proudly, assertively, beautifully at the tee.

Where’s Evelyn Schmidt, 5? Has anyone seen her lovely self or her handsome little brother Theo Schmidt, 3? It’s not really T-ball without those two. Elijah Schaffnit was there, playing well. Rocket Cowperthwaite, 9, was his usual high-energy, fast-moving, fast-talking T-ball self. I looked at him and thought, “It won’t be long before he’s running things.” He’s another beauty, as is his baby sister Imogene, 4, who is more confident, more at ease, than she was just four weeks ago. Willa Ewalt, 3, has also grown in confidence in this short five-week season. She ran the bases as if she owned them and was surrounded by friends and fellow T-ballers wherever she ran.

We ended our season as we have for a long time, with a wiener-roast potluck picnic followed by the awarding of trophies — one for every child who showed up for our final night of play. It is an overwhelmingly joyous experience, this awarding of trophies. I have never experienced anything quite so marvelous and radiant. I thank T-ball for this holy moment.

And I thank all those adults who volunteered and showered their love on our kids — there’s Rebecca Reed, my right-hand person who has been with me for 30 years; and her granddaughter Stefany Lewis, who’s been with us for 30 years; I couldn’t have done it without them.

Then there are the many wonderful parents, like Kyle Ficke, who led the gang of kids throwing balls out to the kids from the first baseline; and Chris Triplett, our first base coach, who gets the kid’s name and then sends them to second. Jeff Inslee, on second base, was there every night save one — the kids needed the base coaches to show them where to go and when. This whole game and its field and all its rules are all new to most of our kids.

Mike Bistline was a base coach a couple times, as was Evelyn Schmidt’s dad, Jacob. Yunus Brevik helped as an on-deck coach, a job done magnificently for a couple seasons by Margi Gay.

Her husband, Rob Gay, was our infield chief, who stationed himself right at the pitcher’s mound from where he marshaled, loved and protected all our kids on the field. Brian Ebersold was a base coach as well. Ben Stratton threw balls out, encouraged all the kids, helping them get to and around the bases. David Boyer gave us time on third base and so did Mark Ewalt. Jenny Johnson was around all the bases with her darling 3-year-old Oly. Kelly Carpe was a bench coach on her first night with T-ball, making sure every child got a turn at bat, getting their names and passing those along to Margi Gay. Pam Fink, Jennifer Deal, Heather Ficke and Myra Valdez-Malishenko all took turns being our bench coach.

It’s a marvelous gang. A loving enterprise. And it has been an extraordinary opportunity for me to lead this merry band, this Yellow Springs Perry League T-ball program. I am a richer, happier, better, more loving person because of it. And for that, I can’t thank you all enough.

One Response to “Coach Jimmy Chesire signs off”