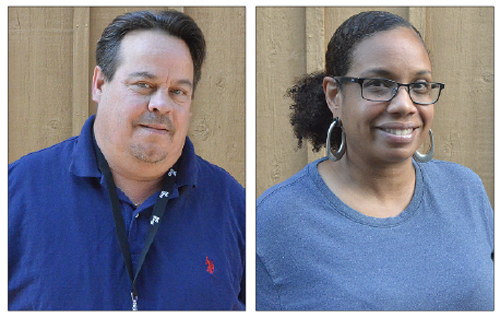 This is the second part of a continuing series on candidates for Village Council, Yellow Springs school board and Miami Township Township Trustees.

Seven villagers are looking for votes to fill three contested Council seats in the upcoming November election. Last week, the News featured profiles of two of the four nonincumbent candidates. This week spotlights the other two nonincumbents: Scott Osterholm, who ran for Council in 1993, and first-time candidate Carmen Brown, known locally as Carmen Lee. Both interviews were conducted over Zoom.

Scott Osterholm, 53, moved to Yellow Springs from Arkansas when he was a junior in high school, and has spent the better portion of his life living in the village. Osterholm has two adult children, Miguel and Erica, both of whom live in Xenia, and a grandson. He is a truck driver who shuttles in the Dayton area and is back home every evening.

According to Osterholm, moving to Yellow Springs came at just the right time in his life.
“I was at a phase of my life where I was really trying to be a troublemaker and I was really bad at it because I was getting caught all the time,” he said with a laugh.

“It gave me a chance to start over and to find out who I was, and that stuck with me,” Osterholm said. Over the years, he moved away from and back to the village a few times, but returned permanently in 2014 after having lived in South Carolina to be closer to his teenage son.

When asked what he loves about Yellow Springs, Osterholm replied: “I love the fact that it encompasses a lot of different — everything. … You can even have two people be on the same side of an issue and they’ll argue with each other.”

Sports and recreation are also an important aspect to Yellow Springs life for Osterholm, who is an avid softball fan. He has built friendships since the late 1980s, playing in various Yellow Springs leagues. He said he coaches for the Dayton Street Gulch softball team, adding: “We made the tournament this year.”

This is not Osterholm’s first run for Council; he ran for office back in 1993.

“Back when I was young and naïve,” he joked.

The difference this time around, according to Osterholm, is that he’s had more life experience, and the needs of the community have changed.

He added: “The younger me would see today and be like, ‘What!?’ I wouldn’t have understood [as many of] the community needs. …. I listen to people a lot better now, instead of being so fired up and being like, ‘No, this is the way we have to do it.’”

According to Osterholm, this year was a good time for him to run for office, because his job schedule allows him the flexibility for the time commitment needed. He also believes he can contribute more to the community.

“I really feel I can do more than just be on the committees — maybe come out from behind the scenes and be more in the forefront,” he said.

Osterholm also cited his experience working on different Village commissions and committees since 2015 as part of his decision to run. He started as an alternate on the Human Relations Commission, participated as part of the Village manager’s search committee, and was on the Board of Zoning Appeals, or BZA. As a result, Osterholm said he’s able to perceive more of what the community needs.

“I’m starting to see, after talking to people, what people really want, and some of the things that I think would be good for our community, that we need,” he said.

Osterholm also said he believes more people should get involved with committee and commission work: “I was very fortunate to be involved with the BZA — you wouldn’t think that [the BZA’s work] would be something that would personally affect you,” he said

Osterholm was referring to the recent opening of Glen Cottages, a pocket neighborhood built by YS Home, Inc., which was approved while he served on the BZA. One of his friends was recently able to secure housing in the burgeoning neighborhood after previously being forced to leave the village when no one would accept her Section 8 housing voucher.

“I mean, it made me tear up,” he said. “I was there when they did the dedication and that was like — wow, I was blown,” he said.

Finding a new police chief after the recent resignation of Police Chief Brian Carlson is also a concern for Osterholm, who was recently selected to be on the police chief search committee.

“I’m not sure what the legalities are, but I really want [a chief] who is going to live here in the community,” he said. “If something were to happen, we wouldn’t have to wait an hour for somebody [to arrive], or have [the issue] delegated [to another officer].”

According to Osterholm, a chief who lives locally and handles issues themselves would also help with accountability.

“I’ve learned in my life that when you delegate something, it’s almost like having plausible deniability instead of taking responsibility for what happened,” he said. “If [the candidate doesn’t] live here, I won’t support them.”

Osterholm also thinks his perspective will differ from some of the other Council members because of his career background, which is in construction.

“I’m a blue-collar guy,” he said. “One of the issues I can relate to is affordable housing. I switched careers after I moved to Yellow Springs, because I wasn’t making enough on construction to live here.”

“I can relate to what people have to do to afford to live here,” he added.

Osterholm said he wants the community to know that he really cares about Yellow Springs.
“We are a tourism town, but we can’t ignore our local population,” he said. “And we’re in the process of doing that. I’ll answer anyone’s question. You might not get the answer you want, but I won’t blow you off. I’ll give you an answer.”

Villager Carmen Lee — whose legal name, Carmen Brown, will appear on ballots — comes from a family whose contributions to the community span generations. Lee — who preferred that her age not be disclosed — has two children, Rowan, 22, and Solomon, 13, along with two dogs and a cat. This is Lee’s first time running for public office.

With deep roots in the community, Lee’s family has resided in Yellow Springs on her mother’s side for about 150 years. She said her great-great aunt Bertha Cordell drafted the Village Charter. Her father’s family has resided in Greene County for 199 years, arriving when her great-great-great grandfather, Godrey Brown, purchased his freedom from enslavement, along with the freedom of 15 other people from a Virginia plantation. Brown brought his family to the area in 1822, and was the founder of Middle Run Baptist Church in Xenia.

Lee, an independent caregiver for elders, considers herself a lifelong learner, having attended the International College of Broadcasting in Dayton, where she received a certificate for recording engineering. She also attended Antioch University Midwest and will attend Wright State in the spring to pursue a degree in industrial and organizational psychology.

Lee’s historical perspective has informed her present-day awareness of the changes that Yellow Springs has undergone over the years. When asked what she loves about the community, she underscored what she believes to be a constant village feature over the years.

“[I love] the fact that we have been able to co-exist — ‘integrated’ — even in a sea of sundown towns,” she said. “So when people were being lynched in Springfield [in the early 1900s], we had publicly integrated outdoor space where white people and Black people could be seen together in the daytime interacting with each other. That’s our history, and that’s what I love about this place.”
Lee said one of the reasons she decided to run for Council is a desire for greater diversity within the Village’s governing body.

“I want to see someone [on Council] in my demographic,” she said. “I don’t mean just a Black woman — I also mean someone who is educated, but barely lives above the federal poverty level.”

Lee said she also wants to give a voice to the people who work in the service industry, in the retail spaces and the restaurants of a village who is dependent upon the tourist economy.

“People who work in the service industries in this town are the people who make it go,” she said.

Touching on representation on Council, Lee said that professional and semi-professional members of Council are well -represented.

“What I think seems to be lacking a little bit are working people, you know — people who do closings at Sunrise [Café], who work from 9 a.m. to 9 p.m.,” she said. “People in the service industry, there’s no representation — that’s a huge part of our community, a huge demographic.”

Lack of civility in community discourse also concerns Lee, who wants to see a return of community engagement that is respectful.

“We have a reputation for being progressive, but what I’ve seen lately is a lack of civility in discourse, that devolves into discord, and people who have divergent opinions not being afforded the courtesy of being listened to,” she said.

She added: “I hope that there can be some type of restoration of what I remember, of people not having the same opinion, but being able to be good community members and neighbors.”

As a member of Council, one of the issues Lee wants to focus on is the future of Mills Lawn.

“What is the Mills Lawn space going to look like?” she asked. “What are we going to use it for?”

Another issue Lee wants to take on is housing affordability.

“I understand that you can’t put the genie back in the bottle, but you can negotiate with a genie,” she said. “We can figure out how to make this a community that works for everyone.”

Lee also said she believes she has the ability to meet people “where they are” in addressing community concerns.

“Everyone expects everyone to be on their level — whatever that means,” she said. “People are only where they are, so meeting people there and having neutral understanding about that is critically important to community building.”

She added: “I’ve seen some instances where things could have been handled better if everyone wasn’t as worried about guarding their position — if certain people weren’t as interested in being right [as in] being able to compromise.”

Lee had an additional message for the Village regarding its values both past and present.

“We have this reputation for being all-inclusive and tolerant — for lack of a better term, accepting of others. That’s kind of like our thing, and it’s our thing [now] because it was our thing.”

And Lee believes a return to those values will benefit the community.

One Response to “2021 Local Election: Osterholm and Brown vie for Council”