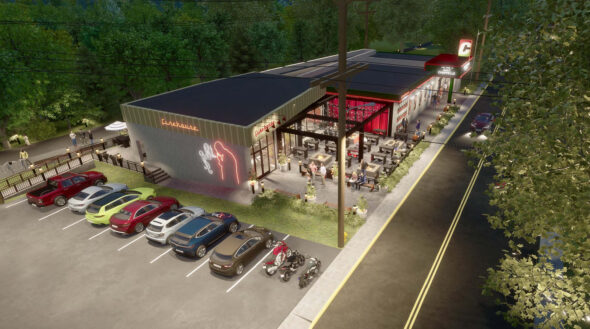 At its Tuesday, Sept. 14, meeting, the Yellow Springs Planning Commission approved the development of the former Miami Township fire station into a comedy club owned by villager and comedian Dave Chappelle. Chappelle's company, Iron Table Holdings, LLC, will renovate the building at 225 Corry St. into a club featuring a performance space and restaurant. (Architectural Rendering by Max Crome)

It’s official: construction will soon be underway for local comedian Dave Chappelle’s planned comedy club and restaurant at 225 Corry St. The site was previously the Miami Township firehouse, and in homage, Chappelle has dubbed his future restaurant “Firehouse Eatery,” and the attached comedy club, “Live from YS.”

Located on 16,782 square feet, about a third of an acre, the building will feature a performance space with “intimate seating,” as described by Crome; a full bar and restaurant; and an outdoor patio. Per Crome’s design, the venue will have an estimated capacity of 140 people. The club sits along the Little Miami Scenic Trail and is situated in the Downtown Business District. The site’s B-1 zoning designation accommodates the plans to serve alcohol and food.

The future club also abuts a Village-owned parking lot and a private medical office. It is also across the street from Kieth’s Alley, a single-family residence and Beatty Hughes Park. The Firehouse and Live from YS will operate as two separate businesses, though Crome said there may occasionally be joint events. The eatery will face the municipal parking lot, which also abuts Bentino’s Pizza and Subway, and will have two outdoor seating areas.

When renovations are completed, the exterior of the building will feature patios with waterproof canopies and outdoor heating that will provide outside seating throughout the seasons.

Commission member and Council liaison Laura Curliss moved to approve the development of the joint restaurant and comedy club upon the conditions that a variance must be sought from the YS Board of Zoning Appeals for consideration of the east side outdoor patio lot-line setback and for the club’s proposed neon sign depicting Chappelle’s “C” logo. She also stipulated that lighting and signing plans be approved by Zoning Administrator Denise Swinger, taking into consideration the comments that were made at the meeting.

Under these proposed conditions, the plan was unanimously approved by all five Planning Commission members: Curliss, Stephen Green, Susan Stiles, Frank Doden and Sarah Amend.
The building was sold to Iron Table Holdings through a deal put together by the Yellow Springs Development Corporation, or YSDC, in December 2020, on behalf of the township for the purchase price of $424,000. The agreement occurred soon after the Miami Township fire station and trustees’ office relocated to a new facility on the south side of town. 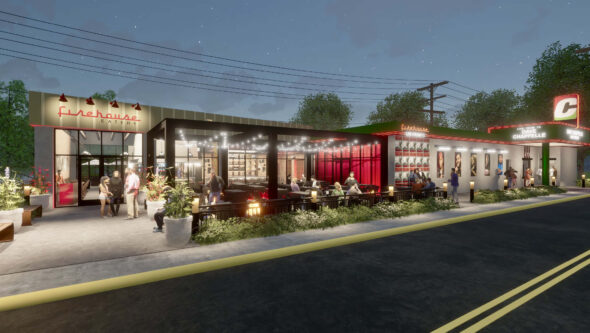 Parking, traffic concerns addressed
Before beginning the presentation on the physical attributes of the submitted building plans, Crome addressed the issue of parking, citing ongoing concerns from some community members.

Crome said he performed an assessment of nearby parking lots on a Thursday, Friday and Saturday night in late August. The assessment, according to Crome, revealed that most of the lots were one-third or less full around 7 p.m., the time he estimated that patrons would arrive for a show at the new venue. If parking becomes an issue, he added, the club could possibly run a shuttle from the parking lot at the Union Schoolhouse, which is also owned by Iron Table Holdings.

As part of the proposal, Crome commissioned a traffic study by LBJ, Inc., a traffic engineering company with corporate offices in Miamisburg. According to Tom Flask, an engineer with the company, strategically placed cameras counted the number of cars that passed through the intersection of Xenia Avenue and Corry Street on Fridays between 5 and 6 p.m. to assess traffic patterns. Considering the restaurant’s hours of operation and the study’s results, engineers concluded that traffic would have little impact. The impact of traffic on the club’s proposed open hours — 6 p.m. to 2 a.m., four days a week — was not mentioned during the meeting.

Crome said that hiring locally during the construction process will be a priority, telling the Planning Commission that Chappelle urged him to hire local subcontractors, as many as possible from Yellow Springs.

Other design plans include soft outdoor lighting that is intended to keep light pollution at a minimum, Crome said. Light pollution was a concern voiced by representatives of Glen Helen and residents across the street from the venue. 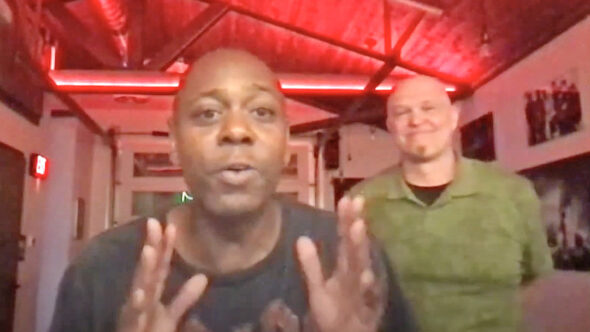 Overwhelming support
Property owner Dave Chappelle appeared before the Commission via Zoom, and emphasized the cultural impact he believes the project would have on the community and the nation.

“The culture of this town is something of global import — I think the way that we treat each other in our community is an example for the rest of the country,” Chappelle said.

Chappelle said he believes the venue will draw entertainers from around the world, despite its relatively small size, and also pointed to the opportunities he intends to offer local artists via the venue.

During the public hearing portion of the meeting, support for the venue was overwhelming across a broad spectrum of the community, from individual residents to local businesses and organizations.

“There is a passing of the baton that’s happening right now — a handful of wealthy, older white men are no longer the dominant property owners in this town,” Dennis said.

Jamie Sharpe spoke on behalf of Downtown Business Association, or DBA. She reported that the 73-member DBA had distributed a survey to its member businesses in order to gauge business operator’s feelings on the proposed club.

“I’m happy to report that there was a unanimous, resounding support of the club,” she said. “We’re really happy to welcome Dave into our business community.”

The News, which is a member of the DBA, did not take a position for or against the project.

Two candidates for Village Council, Lindsay Burke and Issa Walker, were also on hand to express support, with Burke praising Chappelle and Crome. She expects that the club and restaurant will bring new jobs.

Walker, appearing at the virtual meeting from the same building as Chappelle, added his support to the project, saying the club would offer a platform for diverse cultural expression.

“I see this as a great opportunity for the growth of a younger, more diverse culture, which is a huge aspect of our community that I’ve seen dwindling over the years,” Walker said.

Opposition to the renovation did come from Mary Duckwall, who, with her husband, owns the property at 233 Corry St. adjacent to the site of the venue. In a letter to the commission, Duckwall wrote of concern about accidents and liability.

“If you approve this variance, I will be forced to gate the entrance to the parking lot [next door]. That is something I would rather not do for many reasons,” she wrote.

Concern about the project also came from Betty Kelley and Wayne Gulden, who live in a single-family home across the street from the firehouse. Crome met with them to discuss their anxieties over the build, which the couple said were mostly dispelled, though they still have concerns about parking.

After the approval of The Firehouse by the Commission, Swinger thanked staff for their work during the process.

“This is something Johnnie Burns, Josue and I have been working with Max on for well over a year, close to two years, so I am glad that this is finally happening,” she said.

In other Commission business, two conditional use applications were approved by the Commission: an accessory dwelling unit, or ADU, at 118 Marshall St.; and a bed and breakfast, located at 310 Dayton St.

The next Planning Commission meeting is scheduled Tuesday, Oct. 12, at 7 p.m.