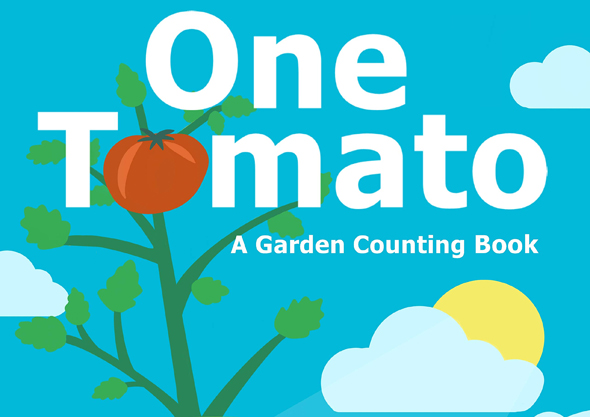 The cover of "One Tomato: A Garden Counting Book," by Rebecca Mullin and illustrated by Anna Mullin. (Submitted photo)

“Picking our garden is so much fun. One ripe tomato, juicy and done.”

With a large pair of orange garden gloves gently tending a tomato seedling, the book “One Tomato” begins. The colorful counting board book, released this summer by Rubber Ducky Press, was illustrated by villager and 2016 YSHS graduate Anna Mullin, and is aimed at ages 2 to 4.

“Or people of any age who want to brush up on their counting skills,” said Mullin in a recent interview. “No judgement.”

The book features scenes of vegetables and wildlife as it leads early readers through counting from one to 10. Mullin said the idea for “One Tomato” was conceived by her aunt, Rebecca Mullin, a preschool teacher and avid gardener living in Eau Claire, Wis. who wrote the book’s text.

Rebecca Mullin contacted Anna Mullin in her senior year at Earlham College in late 2019 and asked if she wanted to collaborate on the project.

“She wanted to create an early learning book for kids to learn where their food comes from,” Mullin said. “For years, I’ve done art on the side. … She sent me ideas for the text, I sent ideas for the illustrations and everything began developing from there.”

Mullin said the process of finding a publisher for the book went faster than the pair were expecting — the book was accepted by Rubber Ducky press, the first publisher they contacted, within just a few months. The Indiana-based small press, which solely produces books for young readers, even expressed interest in developing the book into a series.

“It was completely unexpected, and really exciting for us,” Mullin said. “We had this idea that we would be receiving rejections and feedback for quite a few months before we got anywhere. … We were really lucky.”

Though the acceptance process was quick, the process of drafting the book was a different story. Mullin said she lost count of the number of drafts she and her aunt completed: editing the text, adjusting the contrast and changing the format of the illustrations and adding details that the publisher thought would be interesting for young eyes.

“They said, ‘Let’s do an animal on every spread [of pages],” and “Let’s put in hidden dandelions for the kids to find,” Mullin said. “Some of the vegetables they decided were a little too exotic, so right at the end, we added corn. It’s the Midwest, so we have to do corn!”

Mullin added that, though the drafting process was long — it took more than a year and a half — it was ultimately valuable, not only for the finished product, but for her education as an artist.

“When it’s your first time going through the process, there’s so much you don’t know, and I was grateful for the expertise,” she said. “It was definitely a learning experience.” 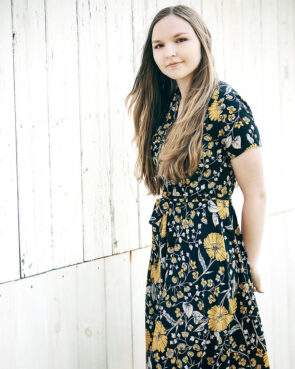 Villager and 2016 YSHS grad Anna Mullin illustrated “One Tomato,” a board book that teaches early readers about counting and gardening. (Submitted photo)

Though Mullin has long been an artist — “I don’t remember a time when I wasn’t interested in art,” she said — her degree is in biology, a field of study that helped inspire some of the illustrations she included in the book. One page features a monarch butterfly in mid-flight next to its smaller mimic, a viceroy butterfly. Marching across the bottom of another page is a string of Pogonomyrmex badius ants, which Mullin researched in college and for which she said she feels a bit of an affinity.

“It was important to me to make the illustrations biologically accurate and interesting — even if those details aren’t noticed by anyone reading [the book],” she said.

Though art is a lifelong passion for Mullin, she said it isn’t her current career path — but it has been useful in some of her work so far. Prior to graduating from Earlham, she worked in zookeeping, interning at the Cincinnati Zoo and at the International Wolf Center in Minnesota.

After earning her degree, she worked for about six months last year as a zookeeper at the Grizzly and Wolf Discovery Center in Montana.

During that time, Mullin said she was able to put her artistic skills to work as well, creating T-shirt designs, animal portraits and stickers for the organizations she worked for. She also created logos for nonprofits focusing on pollinators and elephant conservation.

“It’s been really nice to have those kinds of connections in the conservation world and benefit them by making art,” she said.

Mullin’s career path took a turn, however, after she moved back to the Miami Valley last year — she was offered a job at Homefull, a Dayton nonprofit providing outreach for those experiencing homelessness. Recently, her career transitioned again, and she’s now working as a behavioral health counselor.

“I never thought that I wanted to do just one thing, and when I came back, I thought, ‘Well, let’s try some stuff,’” she said.

“Maybe I get bored too easily!” she joked, before adding: “Really, I wanted to do work that would be good for my own personal growth, and work that really matters.”

Now working in a clinical setting, Mullin said she hasn’t had much opportunity yet to incorporate art into her job, as she did when she was working as a zookeeper. Illustrating “One Tomato,” however, helped scratch that particular itch, and she said she’s even found some thematic crossover between the book and working with those experiencing food scarcity and homelessness.

“Growing up on a farm, I always took it for granted that I knew where my food came from,” she said. “Some of the homeless families I worked with grew up in places where only a limited amount of food was accessible, and I think it’s important for everybody to have access to food and knowledge about food.”

She added: “[With the book], we were interested in making something that would help fill that gap.”

To that end, copies of the book were donated to the YS Community Children’s Center, and the first run of books sold were distributed with tomato seed packets and watering cans, which Mullin said she hopes will help encourage kids to get into the garden.

“I hope that these things inspire kids to get their hands dirty and see what they can grow themselves,” she said.

“One Tomato” is available at several local bookstores, as well as at rubberduckypress.com and other online retailers.