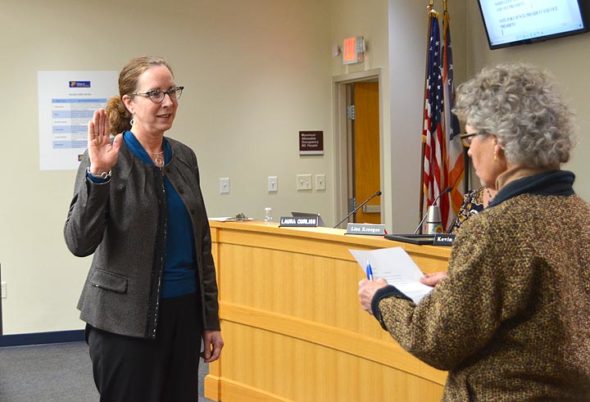 “Shame on you,” Curliss responded to the reading of the resolution, which she contended was “as political as it gets.”

A censure is a public statement of severe disapproval of comments or actions made by a member of a governing body. It does not remove the member from the body or inhibit the member’s ability to further participate in discourse or votes.

In this case, Curliss was accused of making statements that created a “toxic working environment.” Some of the comments cited in the resolution were “snapping her fingers at our Public Works Director, calling our Village Solicitor ‘honey,’ repeatedly referring to our local police department as the ‘f—g police’ and ‘criminals,’ and threatening to remove the Village Manager and other employees from their positions ‘once I get more votes.’”

According to the Village Council Rules and Procedures, updated on Jan. 4, 2021, Council members are held to the same standards as Village staff in order to “combat harassment and bullying” and to promote a “safe and healthy” workplace for Village staff. The rules and procedures also say that Council members should refrain from making “inflammatory, derogatory, or slanderous remarks, ad hominem attacks, blaming or assigning negative motives, and from knowingly repeating false or inaccurate information.”

In a follow-up phone interview, Council President Brian Housh said that Council has taken steps to clarify the rules and procedures and align them with Village values.

“Everything we have done up to this point has been to avoid this [censure],” he said.

After the reading of the resolution, Curliss asked that the matter be tabled until she could receive a hearing and “due process,” citing a memo that she sent to Council and Village staff earlier in the day. With no second to Curliss’ motion, the meeting commenced with comments from each member of Council, including Housh and Vice President Marianne MacQueen, who called for the resolution to be written.

Housh said that he wished he had the “cojones” to censure Curliss sooner so that it would not be perceived as a political move close to the election. He remarked that he would not stand for the behavior Curliss exhibited.

“I have experienced a lifetime with bullies and I am not willing to support those activities. We cannot effectively govern in this type of atmosphere,” he said.

“This is a very difficult thing. … It’s not something that I want to do,” MacQueen said. “We have had at least two meetings regarding patterns of behavior that Laura has done that have negatively impacted staff and Council’s ability to do work.”

Council member Kreeger remarked that the process was “painful” and that she has had growing concerns about Curliss’ behavior. She outlined the process that Council has followed to avoid censuring Curliss, including writing a new Village ordinance and going through the mediation process. She said she felt compelled to speak out when, according to her, top members of Village staff, specifically Josué Salmerón, the village manager; Johnnie Burns, the director of public works; and Breanne Parcels, the village solicitor, threatened to quit if these behaviors did not change.

“Culture starts at the top. We can’t allow our employees to be verbally abused and demeaned,” Kreeger said. “For the good of our community, we should hold ourselves to the highest standards.”

Council member Kevin Stokes echoed the comments of his peers, saying that the process is difficult. He said that Kreeger’s comments were “spot on” and affirmed that all of the assertions are true.

“I’ve directly or indirectly witnessed them,” he said.

When given a chance to speak, Curliss first accused Council of libeling her, and asked whether Chris Conard, the Village’s former solicitor whom Council asked to be present, was representing Curliss or the other members of Council.

In response, Conard declined to comment on whether Curliss had been libeled, but cited a court case, New York Times vs. Sullivan, which determined that public officials are held to a different standard in cases of libel.

Curliss then responded to each of her peers’ comments, calling some of the accusations “complete misstatements” and a “litany of horribles.”

“You’re impugning me with things that you’re saying are facts, but they’re not facts,” she said. “They’re points of view and political statements.”

She attempted to contextualize the comments and asked why comments that were made in executive sessions and mediation were being used against her in a public forum. In response to allegations of “snapping her fingers” at Burns, Curliss said she was trying to get his attention.

“You’re making it sound like I was snapping my fingers in his face,” she said. “For him or anyone else to take offense to that is quite astounding.”

She also said that she did call Parcels “honey” during a heated discussion, but that the conversation should have been subject to attorney-client privilege.

“It was a difficult conversation and I was mad,” Curliss said. “I apologized, but apparently she hasn’t accepted my apology.”

Regarding her comments about the police, she said that those comments were made in executive session and not to any specific police officer.

In that executive session, Curliss referred to the local police department using expletives Council found inappropriate. At Monday’s meeting, Curliss defended her use of, and repeated, the expletive

“I said, in my mind, that this is something that police do … and I’ll say it again, ‘f—g police,’” Curliss said.

Curliss went on to say that her experiences with Salmerón have been negative, and that she is upset that he continually told her “no” when asked for meetings or for help. She asked members of Council if they would be frustrated with that treatment from the village manager, but received no response. She then reiterated that she has attempted to make amends and that she believes that the censure is fueled by political motives.

“I’ve told you what I’ve done and what I’ve apologized for. I don’t know what else I can do” she said. “I don’t get it, quite honestly.”

Stokes commented that censuring Curliss was a step in a process, and that Council has made an effort to “stem a tide” of behaviors.

“One could submit that there is a pattern or trajectory,” he said. “Efforts in the past have been made to curtail that trajectory, and this is the logical next step.”

Other sections of the resolution asked that Curliss stop using “unethical advocacy tactics” and that she work with members of Council and the Village Management team rather than “obstruct ongoing work.”

Curliss, Housh and Stokes are all running for re-election in the Nov. 2 Council race.
After the back and forth between Council members, Housh asked that the roll be called for a vote.

The resolution passed 4–1, with Curliss being the only “no” vote. Leading up to the vote, Housh said that Council would need to move forward with the rest of the agenda.

After the hearing was closed, and Council moved to the citizen concerns portion of the meeting — for which Council procedures and rules dictate that public comments be limited to subjects not on the agenda — villager Terry Smith criticized Council’s refusal to hear comments from citizens regarding the censure of Curliss.

“It really startles me that you can say all of this malarkey and that no citizens can comment,” Smith said.

Follow-up phone interviews with Salmerón, Burns and Parcels verified the allegations pertaining to their individual conflicts with Curliss. Salmerón and Burns commented that the problems have been ongoing for two years.

Parcels said that the events did happen, but she did not know that they would be included in the final draft of the resolution.

“What’s in the resolution did happen and she did it not once, but twice,” she said. “It was brought to Council earlier in the year during an executive session.”

After verifying the event that involved him, Burns said he wished that Council had taken action sooner.

“I think what they did was appropriate. Our jobs are hard enough without the added conflict.”

Additional coverage of Council’s Oct. 4 meeting will appear in next week’s edition of the News.