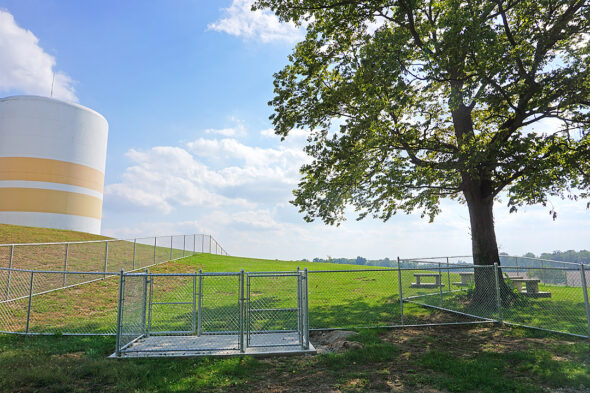 The long-awaited Yellow Springs Dog Park will have its soft opening on Saturday, Oct. 9; its open hours — dawn to dusk — will mirror those of Gaunt Park, where the new dog park is located. A formal opening celebration is slated for spring of 2022. (Photo by Lauren "Chuck" Shows)

Canines, rejoice! The Yellow Springs Dog Park announced this week that it will be “open for play” beginning Saturday, Oct. 9 at 10 a.m. The opening comes after more than a year of planning and work to make the park, which is located on 1.3 acres in Gaunt Park, accessible for dogs and their human companions.

Visitors to the YS Dog Park will have access to separately gated areas for large and small dogs from dawn until dusk, though on opening day, the areas will not open until 10 a.m. Rules for visiting the dog park will be posted around the area; the five most important of these for folks to know in advance — as identified by park organizers and volunteers — are as follows:

• Do not bring dogs that are aggressive, sick, in heat, or less than four months old.

• Handlers must leash and remove their dogs at the first sign of aggressive behavior.

• Handlers must be 16 years old. Children ages 6 to 15 are permitted if accompanied by an adult. No children under 6.

• No food or dog treats in the dog park.

• No more than two dogs per handler.

Outside of these posted rules, YS Dog Park organizers also hope to educate upcoming visitors on some broader best practices to ensure a safe and fun environment for the village’s dogs and their people. To that end, Zoey Bryant, co-chair of the YS Dog Park Education Team, stopped by the News this week to offer some guidance.

“We also have what we call ‘Dog Do’s’ — a positive framing of how to use the park beyond just the basics,” Bryant said.

At the heart of these “Dog Do’s,” Bryant said, is a desire for those with dogs to be mindful and engaged while at the YS Dog Park, keeping in mind both the comfort and wellbeing of their own dogs and the other dogs at the park.

“It really is a community effort when you go to the dog park,” she said. “You kind of want to take stock and assess — maybe call your dog away from the entrance if they’re lingering there when a new dog is coming in so the new dog has some space.”

Bryant also added that YS Dog Park’s human visitors are encouraged to move with their dogs within the enclosed area, not only as a way to engage with their own dogs, but also to reduce the risk of negative interactions with other dogs.

“Following your dog can help them feel more safe and comfortable, particularly if a more aggressive dog enters the space,” she said. “The more disengaged people are from their dogs, the greater the potential for conflict with other dogs.”

Bryant added: “I feel like [the ‘Dog Do’s] kind of sets us apart as a dog park — it invites handlers to be a little bit more involved and aware.”

The park’s “Dog Do’s” will be posted around the park along with its rules, though temporary signage will be displayed at the park for the time being until permanent metal signs are installed.

Some other planned components of the park, such as an informational kiosk at Gaunt Park’s entrance, will not be available until the spring.

A formal opening celebration is intended to be held in the spring and educational events around park best practices will also be scheduled at that time. Until then, a video tour of the park with some information on “Dog Do’s” will be posted on the YS Dog Park website at yellowspringsdogpark.org by Oct. 9.

A QR code for making donations to the park through the YS Community Foundation will be displayed on-site as well. Volunteers are always welcomed and needed; for more information on how to volunteer, visit the web address above or go to facebook.com/groups/ys.dog.park.

One Response to “Yellow Springs Dog Park to open soon”