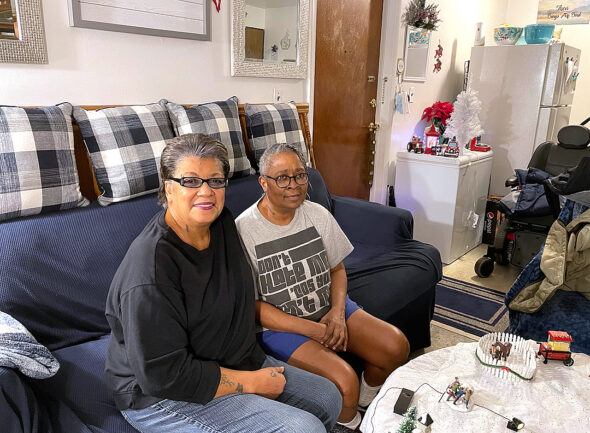 10 Lawson Place residents Debbie Austin, left, and Charita Burks Rhone in their apartment. The building in which they have lived for the past seven years was recently purchased by the Village. (Photo by Cheryl Durgans)

After 10 Lawson Place was put up for sale, longtime resident Charita Burks Rhone felt a roller coaster of emotions, uncertain whether she would be able to remain in the apartment building she has called home with her partner, Debbie Austin, for seven years.

Burks Rhone’s family came to Yellow Springs in the 1960s, and she ran a barbershop with her father, the late Emmett Burks, that catered to many of the town’s Black residents until the ’90s.

“It felt like we weren’t needed or wanted here anymore. … We had put our lives into this village. My parents, my life, my children’s lives, we went to school here, graduated here, and now I’m being forced out. … Like, if you can’t afford to live here, we don’t want you here,” she said.

The lack of affordable living options and the decrease of diversity in the community were concerns for Austin. So, when the Village stepped in to purchase the 16-unit apartment building — listed in August on the property website Zillow for $1 million — to keep some affordable housing in Yellow Springs for moderate- to low-income residents, Austin was relieved.

“I understand the importance of the Village buying the apartments, because if they don’t, then how are Blacks going to come back? How are young kids going to come here and start their families?” she said.

The Zillow sale listing of 10 Lawson Place attracted the attention of Village Manager Josué Salmerón, who was present for the interview with Burks Rhone. Also in attendance was longtime villager Shelly Blackman, of Keller Williams Advisors, who worked on behalf of the Village in the building purchase.

Salmerón was concerned that, if the Village did not act, people would be displaced. If the building was sold to a developer who didn’t share original owners Orlando and Leonora Brown’s vision of providing affordable housing to residents, they might increase rents to market rates comparable to other units in the village.

The Browns, who were African American teachers, constructed the building in 1963 with the intention of providing affordable housing to the community — particularly for Black villagers.

Currently, there are 11 families living in the building, with residents varying in ethnicity, age and gender. When Orlando and Leonora Brown passed away in 2016 and 2018, respectively, property management duties fell to their sons Martin, Allen and Vernon.

Average rents for the apartments continue to be below market rates, with tenants paying between $500 and $600 a month. In comparison, one-bedroom apartments at another local apartment building, Hawthorne Place, are listed at $675 in a classified in the News.

On Nov. 29, Council approved a down payment for the building of $160,000 and authorized the financing of the purchase for up to an additional $800,000. The closing date will likely be after the new year, according to Salmerón.

According to Blackman, these are unprecedented times in the real estate market.

“I think this last 18 months to two years has been something that we’ve never really seen before, and it’s been happening nationally,” he said. “There is a strong seller’s market with very little inventory, and 3% interest rates. What that did to the market was drive those prices up — [there were] multiple offers on properties going for $30,000, $40,000, $50,000 over list price.” he said.

Blackman said that a finite number of homes in a desirable place to live like Yellow Springs makes housing affordability in Yellow Springs a challenge.

“People come from all over to hang out in Yellow Springs, and it’s a supply and demand issue.

And that is why the property values go up,” he said.

He also said that similar properties may go for much lower in other communities.

In a phone interview with the News, Martin Brown, who, along with his two brothers, inherited the property from their parents, explained why the family decided to sell.

“We all had mixed emotions about it. For me, being in proximity was a reason. I was in Columbus,” he said.

According to Martin Brown, his middle brother Allen, who lives in West Carrollton, assumed the property management responsibilities for the building when their parents died. Martin Brown, who is much younger than his two older brothers, also said age was a factor in the decision to sell.

“Allen, Vernon and I talked and felt like he [Allen] was getting to the point where he couldn’t manage the property,” he said.

Brown said that, although they considered other offers besides the Village’s, they ultimately made their decision because the Village was committed to affordable housing.

“We all collectively felt good about that,” he said.

Salmerón moved quickly on behalf of the Village to purchase the building, first attempting to partner with other groups.

“[The Village] didn’t start off with the intention to just go out and buy the property,” he said. “I tried to put together a group of folks to see if we could go into a joint partnership.”

When those efforts fell through, the Village decided to act unilaterally to purchase the building.

“What would it cost to replace affordable housing for 16 units, versus acquire? And that’s where my mind was,” Salmerón said.

According to Salmerón, the decision to purchase the units was also influenced, in part, by his previous experience as managing director of Community Preservation and Development Corporation in Silver Spring, Md. The organization focused a part of its mission on affordable housing preservation.

While the Village will initially purchase the property and assume some property management oversight, efforts are being finalized to contract an outside property management company to oversee the collection of rent. Salmerón made it clear that this move is a short-term one. He is encouraging renters to consider undertaking a cooperative management model of a tenant-owned and operated apartment building.

“I think the cooperative model is really the way to go with this property, for very basic reasons:

The people that are going to support the finances of running this building are the tenants,” he said.

According to Salmerón, maintenance of the building must be supported by revenue from rents. It is likely that rents will increase but remain under market value. While the building structure is in good condition and Salmerón would like to update apartment amenities, there are repairs to the sewer line that will cost an estimated $30,000, and the need for a new roof that will require immediate attention first.

A property tax increase will occur once ownership of the building is assumed. Knowing this to be an inevitability, the Village is actively pursuing property tax abatement.

Austin and Burks Rhone are generally supportive of the idea of a building cooperative, but have concerns about whether other tenants would agree to a potential management shift that creates more work.

According to Salmerón, there are ways to work with people who have different levels of involvement with the process.

“There is a difference between a person who can’t contribute and a person who says, ‘You know what? I am going to get out of your way, you do what you have to do, I believe you have my interest [in mind],’” he said.