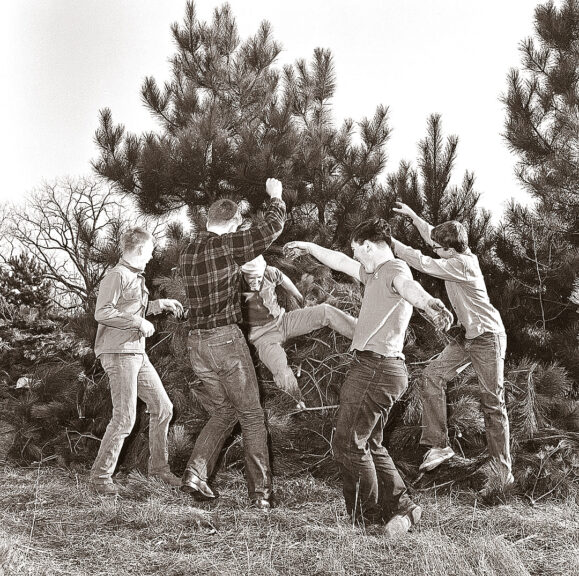 Bryan High School students cavort around a brush pile during the School Forest event in 1962. The School Forest Festival, now in its 73rd year, was held Saturday and Sunday, Dec. 4 and 5. (YS News Archive Photo)

• “The Little Art will begin pouring drinks … at a special showing of the film ‘Sideways,’ Alexander Payne’s 2004 film set in California wine country. Several wines from the film will be featured.”

• “Upgrade makes sewage plant shiny and new. After nearly two years of work and about $3 million in upgrades, the Village’s refurbished wastewater treatment plant now has not only higher water quality but also a new name. Instead of focusing on ‘wastewater’ coming into the plant, the new name for the Village Water Reclamation Plant emphasizes its ability to save water by treating it and returning it to healthy streams and waterways.”

• Craig Conrad, head of maintenance and custodial supervisor of Yellow Springs Schools retired after 27 years. “When educators build schools, they design for classrooms, not for storage and maintenance needs. So it’s no surprise that when Craig Conrad began his job as head of maintenance for Yellow Springs Schools in 1985 he found not only a lack of space for the school’s voluminous records, books and equipment, he also found no room for himself. … It took him 11 years before he finally set about making a proper office for himself. … Spending cutbacks over the past several years have forced the schools to do more with less, which has in turn forced Conrad to defer minor maintenance, which he has found frustrating.”

• “St. Paul’s Church marks its 140th anniversary. … The congregation was established August 15th, 1856 when the cornerstone for its first church at High and West North College was laid. [The building now houses the business Electroshield.] On July 9th 1908 the present church building was purchased from the Christian Connexion for $2,500.”

• Cabooses came to town. “Owned by the Village of Yellow Springs — a gift from Wright-Patterson Air Force Base, arranged by villager Lance Grolla — the two cabooses will be used as Scenic Trail headquarters, to serve folks hiking and biking through town on the Trail.”

• “23 Take Police Exam. 23 took the written examination for positions as Yellow Springs police patrolmen yesterday at the municipal building. There are two openings on the local force to replace John Hollister … and Farell Ballenger.”

• “Mrs. Furay Ends 43-year Retail Career Here. Naomi Furay has sold her gift store. … There was a definite air of nostalgia about Mrs. Furay — Snookie to those who have known her since the days when she was Naomi Coffman — as she recalled that she began to serve the Yellow Springs buying public in 1928 as a clerk in the dry goods department of Weiss and Wead [then Luttrell’s, then Weaver’s and now Tom’s]. … She has no present plans except to undertake part-time responsibility as manager of the personal business affairs of her son Rich Furay, lead singer with the popular music group Poco.”

• Segregation of restaurants challenged. “Occasion of the early closing of Yellow Springs’ only two downtown restaurants last night appeared to be the attempt to obtain service in them by an inter-racial group of twenty people. The Glen Café closed its doors just as this group appeared there shortly after Frank Dewine is reported to have shouted through the glass that the restaurant was closed.”

• “Dewine Batters Howard to Street in Unprovoked Attack. Kieth Howard, editor of this newspaper, preferred charges of assault and battery against Frank Dewine as the result of an attack on him by Dewine last night. … Howard is a member of the executive committee of the inter-racial group which was locked out of the Glen Café earlier in the evening.”

• “Glen Director in Public Meeting Monday. Kenneth Hunt will tell of his plans to make the Glen a center of research in the problems of farmers and gardeners of the community. He will also deal with the conservation problems of the country as a whole.”

• Advertisement — “Shotguns for sale or rent at the Hardware Store. Also ammunitions of all kinds.”

• Close the Post Office on Sundays. “The crowded condition of the post office last Sunday again demonstrates the fact that ‘these things ought not so to be.’ There is no more reason for allowing the office to be kept open on Sunday than there is in arguing that a man should be a Democrat when his better sense tells him he should remain a Republican. The post office should be closed on the Sabbath day.”

One Response to “News from the Past: December 2021”