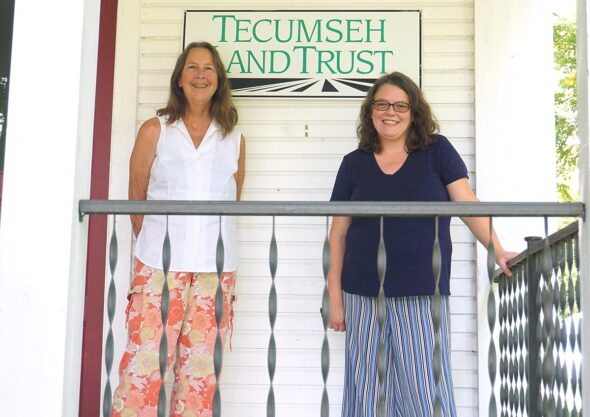 Krista Magaw, left, recently retired after 20 years as executive director of Tecumseh Land Trust. Michele Burns, right, formerly associate director of the nonprofit has moved into the executive director position. The two were photographed late this summer on the front porch of the TLT offices at Whitehall Farm. (Photo by Carol Simmons)

What might have been a major transition for many organizations was less earth-shaking for Tecumseh Land Trust, or TLT, when the nonprofit’s longtime executive director retired this fall.

“It’s not sudden, it’s been very slow, deliberate,” Krista Magaw said late this summer as she prepared to depart the agricultural preservation group she headed for two decades.

She said her plan for a number of years had been to hand the reigns over to Michele Burns, who joined TLT in August 2008 as associate director. And that’s what’s happened, as Burns has moved seemingly imperceptibly, at least to outside observers, into the executive director’s role.

Although Magaw said the job always “stayed fresh” for her, she felt that 20 years was a good marker to conclude her tenure. She said her decision to leave was given “some urgency,” however, by the recent move of her parents into Friends Care Community. She’s also looking forward to working on the farm that she and her husband, Andy Carlson, own outside of town, and spending more time on artistic pursuits. She and an artist friend from Columbus recently had a show of their work at The Winds Cafe.

She expressed some amazement that she’d amassed such a lengthy tenure with the land trust.

“I’ve been [with TLT] more than three times the years I’ve been at any other job,” she said.

Her previous employment was in the mental health field. She worked with clients and running programs in group homes and shelter settings, but her family grew tired of on-the-job time that included weekends and holidays.

Moving to Yellow Springs in 1997, Magaw was eyeing a change after the Dayton satellite of Capital University, where her husband was on the history faculty, closed, and he was transferred to the university’s main campus in Columbus.

“We had a child in school and nobody [working] in town,” Magaw said.

She became aware of TLT at the same time in following the group’s facilitation to save the Whitehall Farm property.

“Julia Cady and Al Denman [founding leaders] were on the cover of the paper the first week we were here,” she said. “I admired their work.”

In addition to her nonprofit work in mental health, Magaw also had a master’s degree in public policy from Duke University. So when the previously all-volunteer land trust, then 11 years old, sought to hire professional staff to expand its efforts, Magaw applied.

“I had a comfort level across the public/private intersection,” she said.

Her hiring followed the passage the year before of the state’s Clean Ohio initiative, which provides funds for land preservation.

“We jumped right into being able to pay for easements,” she said, adding that combining state and federal money has made it possible to allow agricultural property owners to receive money for preserving their land from future development.

In the years since, the group’s focus on preserving agricultural land hasn’t changed, though Magaw allows that there has been some “refinement.”

The emphasis is “not just on preserving land, but enhancing what we have,” she said. That includes supporting the health of area waterways, such as the Jacoby Creek restoration project, for which TLT is a partner with the Nature Conservancy and the Agraria Center for Restorative Practice, among other groups.

The existence of the Agraria farm property is another example of the work TLT accomplishes, as it helped facilitate the purchase of the land formerly owned by the Arnovitz family, who had put it up for auction. If not for Agraria’s purchase, the land likely would have gone to a developer.

“What you want to do is be ready for things that come along,” Magaw said. “When the Arnovitz property went to auction, we just went into action.”

In preparing for Magaw’s departure, the TLT board listed some the group’s achievements under Magaw’s leadership, including the Agraria purchase.

Other highlights included:
• Increasing the number of preserved acres tenfold, to over 33,000 acres.
• Protecting Glen Helen Nature Preserve with a permanent easement, which was nine years in the making.
• Enabling TLT to become one of the first accredited land trusts in the nation through the national Land Trust Alliance.
• Keeping TLT in the black despite the 2008 recession and the COVID shut down.

The board also noted that Magaw provided personally made baked goods for nearly every board meeting.

As she left the organization, it had a $325,000 budget; a staff of three full-time and one part-time employees; a pool of 30 active volunteers; and a 15-member board that served along with other volunteers on at least eight committees, including education, development, finance, land preservation and stewardship.

Burns, who has a degree in natural resource management and whose previous work experience included employment with the National Park Service and U.S. Geological Survey, said that the board is starting a strategic planning process “to see what future needs we might have.”

Burns also operates the organic Flying Mouse Farms with her husband, John DeWine, and is the lead organizer of the Saturday outdoor farmers market.

She said that the land trust’s ability to weather the pandemic was a credit to Magaw’s leadership, but also “makes us realize what a strong staff we are. What strong support we have. People come through for us, and we really appreciate that.”

Magaw said that a “silver lining” of the pandemic is that “people have been able to connect better with nature.” That connection leads to a desire to preserve.

“The land and water matter to us,” she said.