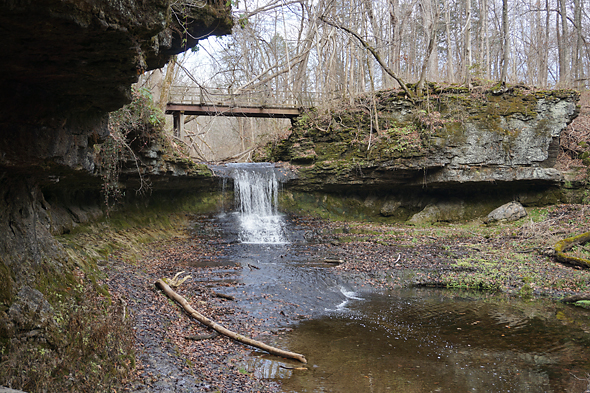 The earth smells old and warm and mellow, and
all things lie at peace.
I too serenely lie here under the white-oak tree,
and know the splendid flight of hours all
blue and gay, sun-drenched and still.

Etched into a memorial plaque on a large boulder, just about a quarter mile’s hike beyond the Yellow Springs, are these sylvan verses.

It’s an excerpt from the 1927 pastoral poem “Up in the Hills,” by Helen Louise Birch Bartlett, who, after her death, became Glen Helen’s namesake when her father donated the land to Antioch College in her honor.

Helen’s Stone, as it’s called, sits at the foot of the mouldering remains of an age-old oak tree. Fallen leaves carpet the ground and are strewn into patterns of decomposition. The faint music of the splashing cascades fills the air. It’s as if the passage of time can be seen, heard and felt at the poet’s hallowed spot.

While it’s been nearly a century since Bartlett’s death, her spirit persists in Yellow Springs’ community of literary luminaries who draw inspiration from the Glen’s quiet beauty.

And on Friday, Dec. 10, a handful of these writers will gather virtually to participate in the annual Winter Solstice Poetry Reading, beginning at 7 p.m., via Zoom. Attendees of the virtual event must register in advance at bit.ly/3pD7CKA. The event is free and open to the public, but donations to Glen Helen and Tecumseh Land Trust — the event’s respective partners and sponsors — are encouraged.

Now in its 10th year, the Winter Solstice Poetry Reading’s theme is “Sacred Ground,” which, according to organizer and local poet Ed Davis, is an homage to the event’s longtime and rightful home: Glen Helen.

“I think of Glen Helen when I think of a sacred ground,” Davis said in a recent interview. “It’s a place that’s been more meaningful to me than any other. The Glen speaks to me — the very ground, the trees, the dirt. You know, it’s all there for me.”

Davis said that, while the Glen is a sacred place for him, the 11 participating poets may stretch the limits of what they find sacred — to “interpret the theme as they see fit.”

This year’s featured poets are Jeff Gundy, Paula J. Lambert, Herbert Woodward Martin, Anne Randolph, Robert Paschell, Arielle Johnson, Debra Williamson, Emily Foubert, Erica Manto Paulson and Davis himself. The majority of the poets are from Yellow Springs, with several hailing from farther afield in Ohio. Each of the poets will be allotted five minutes to read their original work.

According to Davis, the poetic stylings of the participants differ significantly: Martin, who Davis described as “a Dayton institution of poetry,” often ventriloquizes the work of Paul Lawrence Dunbar. Davis believes Paschell, a longtime village resident — who can be seen selling handmade T-shirts and reciting his poems from memory in downtown Yellow Springs — will read with his quintessential zeal. Johnson, also a Yellow Springs native and a freshman at Case Western Reserve University, is the youngest in the roster. Davis expects her to bring “some youthful energy.”

“I’m excited to see the creative tensions that’ll be produced,” Davis said. “I think the juxtapositions [between the poets] will be very interesting.” 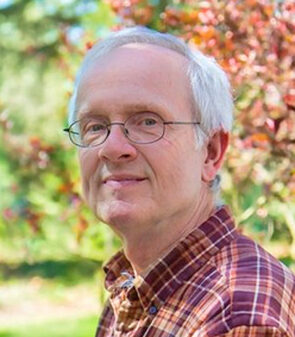 After ten years of organizing and coordinating the Winter Solstice Poetry Readings, local poet Ed Davis is stepping down from his leadership role. (Submitted photo)

In a surprise guest appearance — owing to the “magical alignment of the stars and the planets on the winter solstice,” as Davis said — the spirit of Helen Birch Bartlett is slated to attend the poetry reading to recite some verses of her own.

“[Bartlett’s] poems view nature with something of a mystical quality,” Smith told the News. “Her love of nature is apparent in her writing. Mostly, I’ll read some poems she wrote and try to imagine her voice if she could truly be here with us now.”

Davis sees the 19th-century poet’s “magical” appearance as a return to the Solstice Poetry Reading’s roots. The first event, held in 2012, was called “In the Spirit of the Glen.”

TLT’s former executive director, Krista Magaw, hatched the idea of a nature-themed poetry reading late in that year. She quickly turned the concept over to Davis and the land trust’s education committee, who pulled the event together in just three weeks — just before that year’s solstice. That first reading featured about 17 poets and drew an audience of over 100 listeners.

In the decade since, local poetry lovers have told Davis that the event has become a part of their annual holiday traditions.

“I didn’t know this would happen,” Davis said. “I couldn’t have ever imagined that over a hundred people would show up some years. I initially thought the events would bring in the usual 20 or 30 people who typically show up to these kinds of events.”

Even last year, the first year of the COVID-19 pandemic, when Davis and other solstice poetry reading organizers decided to hold the event virtually for the first time, nearly 100 attendees logged into the reading.

Davis said he believed the virtual format didn’t deter attendees because at the end of the pandemic year, he saw an outstanding desire to experience “something magical, something that could take us out of time.”

“I had people tell me that [last year’s poetry reading] was just as intimate as ever,” Davis said. “Wow! That a Zoom meeting could still be intimate. So, although it came out to be something different, the magic wasn’t completely sapped out.”

This year’s solstice poetry event, also being held remotely out of sustained caution for the ongoing pandemic, will be Davis’ last year spearheading the reading.

“I think 10 years is long enough to lead something literary,” he said. “I think it’s time for other eyes and other ideas. I’ll still be on the committee, so I’ll still be around.”

Leading future solstice poetry readings in Davis’ stead will be area poet and writer Matthew Birdsall. Currently, Birdsall edits the Dayton-based literary journal, Mock Turtle Zine, and according to Davis, has “enthusiasm for local poetry out the wazoo.”

According to Davis, Birdsall and his wife, Melissa Bautista, have stepped up into leadership roles in organizing the solstice poetry event over the past several years. In addition to Birdsall’s contributions to organizing and planning the event, Bautista has facilitated the technological facets of the reading — specifically making sure the Zoom platform is able to accommodate the event’s intimacy.

“They’ve been instrumental, so I’m more than happy to pass it on,” Davis said.

In addition to this changing of the guard, the virtual format and the supernatural appearance of Bartlett, one final item will set this year’s poetry reading apart from the previous nine: Davis and event organizers are in the beginning stages of compiling an anthology of solstice poems read over the last decade.

According to Davis, of the 83 poets who’ve participated over the past 10 years, 61 have submitted their poems. Davis said the anthology will be available for sale and distribution at the 2022 event — which Davis and the land trust’s education committee hope will be held in person.

“In a nutshell, I think these poems give people hope,” Davis said. “Everyone could agree these are dark times. People are having a tough time with COVID, with politics. So, while we’ve always needed poetry, God knows we need it now.”

“Poetry is sustenance — even more than when it was live and in person. It’s nutrition that we all need. It’s sacred.”

To learn more about this year’s Solstice Poetry Reading and the participating poets, to donate to Glen Helen or the Tecumseh Land Trust, or to register and receive a Zoom link for this year’s event, visit the land trust’s website at bit.ly/3pD7CKA.