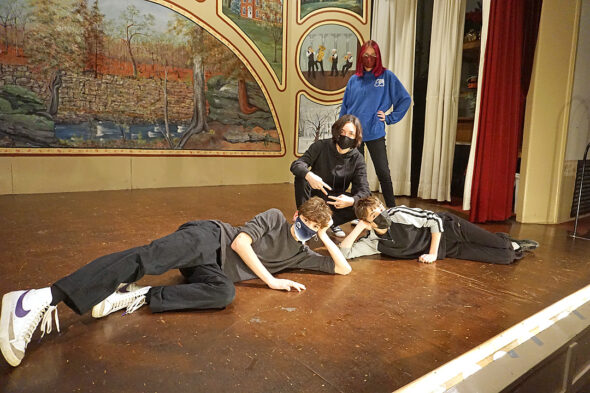 Pictured on stage at the Clifton Opera House are some of the cast of the McKinney Middle School and YS High School production of “The Stinky Cheese Man and Other Fairly Stupid Tales,” which will be performed this weekend. Lounging on the boards during a break from rehearsing “The Princess and the Bowling Ball,” one of several of the show’s vignettes, are Teddy Horvath, who plays the Prince, and Kiernan Anderson, the Narrator. Maintaining their royal dignity in the back are Trevor Roberts and Nora Bongorno, who play the King and Queen, respectively. (Photo by Lauren “Chuck” Shows)

What to write about a play that calls itself “stupid” right in the title?

“The Stinky Cheese Man and Other Fairly Stupid Tales” will be performed by students from McKinney Middle School and YS High School on Friday, Saturday and Sunday, Dec. 10–12, at Clifton Opera House.

Performance teacher and the show’s director, Lorrie Sparrow-Knapp, told the News in a recent interview that the show lives up to its name.

“This is without a doubt the most ridiculous comedy I’ve ever seen in my entire life,” she said.
The musical play will be performed mostly by McKinney seventh and eighth graders, with only a few of its roles taken up by YS High School freshmen and sophomores.

“This is the new batch — the future of our theater department,” Sparrow-Knapp said. “And [the future’s] really bright and shiny, from what I can see.”

Sparrow-Knapp said she chose the play last school year just after local schools returned to in-person instruction as a fun way to introduce younger actors to the nuts and bolts of acting: rehearsal, character study and working together to bring a show to life.

“So I thought to myself, ‘Let’s spend time laughing and learning by working on this really incredibly stupid script’ — and it is stupid,” Sparrow-Knapp said. “I mean, there’s highbrow comedy and there’s lowbrow comedy — and then there’s this.”

The play is based on a 1992 storybook of the same name, written by Jon Scieszka and illustrated by Lane Smith. The book reimagines and satirizes classic fairy tales for young readers, wearing its postmodern heart right on its sleeve, and nearly 30 years after its publication, it has become a classic in its own right. Young readers are still drawn to the impudence of such stories as “The Princess and the Bowling Ball,” “The Other Frog Prince” and “The Really Ugly Duckling.”

Like the book on which it’s based, the stage version of “The Stinky Cheese Man,” adapted by playwright John Glore, features an assortment of thinly connected vignettes in which characters break the conventions of their fairytale archetypes. Because it’s being performed rather than read, the stage version also plays with and against conventional theater tropes, frequently breaking the fourth wall and, at times, openly mocking itself.

The production is something of a tonal lead-in to the theater department’s upcoming spring production, “Shrek: The Musical.” Those familiar with its titular green ogre will know that “Shrek,” too, deals with eschewing traditional fairy tale narratives.

“Our whole season this year — from ‘Stinky Cheese Man’ to ‘Shrek’ in the spring — revolves around character,” Sparrow-Knapp said. “Characters that make us feel something, that make us laugh and push us out of our comfort zones and into the land of make-believe.”

The large cast and crew of “The Stinky Cheese Man” have had a relatively brief time to put together the hour-long show; they began rehearsing in mid-October. For that reason, Sparrow-Knapp said, the young thespians have played “fast and loose” with the show’s songs, often arranging and choreographing the musical numbers themselves.

The play will be performed at the Clifton Opera House — a new stage for many of the actors. Sparrow-Knapp said that a consistent performance venue continues to be an issue for the theater program.

“They move from space to space, so there’s never familiarity with a space — so we start back at square one every show,” she said. “But these kids work hard and they roll with the punches.”

Sparrow-Knapp told the News early this week that she’d just learned she was exposed to COVID through a family member and was quarantining. The show, of course, must go on without Sparrow-Knapp, who is confident the young cast and crew — used to rolling with punches — will be fine.

“This is going to be a rise-up moment for the children — and for all of us,” she said, noting that others have stepped up to oversee the show. Parents Jackie Anderson and Caryn Diamond, the latter of whom is also producer and accompanist, and YSHS student and stage manager Eve Diamond have been directing rehearsals.

Sparrow-Knapp will be there digitally, watching via livestream, but urged the community to come out and see the “fairly stupid” show in person.

“I apologize to all the viewing audiences for the depths to which we are about to sink,” she said, laughing. “And yet, we invite you to come and swim, because these stories and these students are delicious.”

“The Stinky Cheese Man and Other Fairly Stupid Tales” will be performed Friday, Saturday and Sunday, Dec. 10–12, at the Clifton Opera House. Performances will be held at 8 p.m. on Friday and Saturday and 2 p.m. on Sunday.

Tickets are available online at bit.ly/3rs6njZ. Cost is $5 for students, $10 for seniors and $15 for general admission, with an added processing fee for online sales.

Masking is required for all performances. There is no parking lot at the Clifton Opera House, so carpooling is encouraged; patrons may have to compete for parking with those visiting Clifton Mill’s light display.