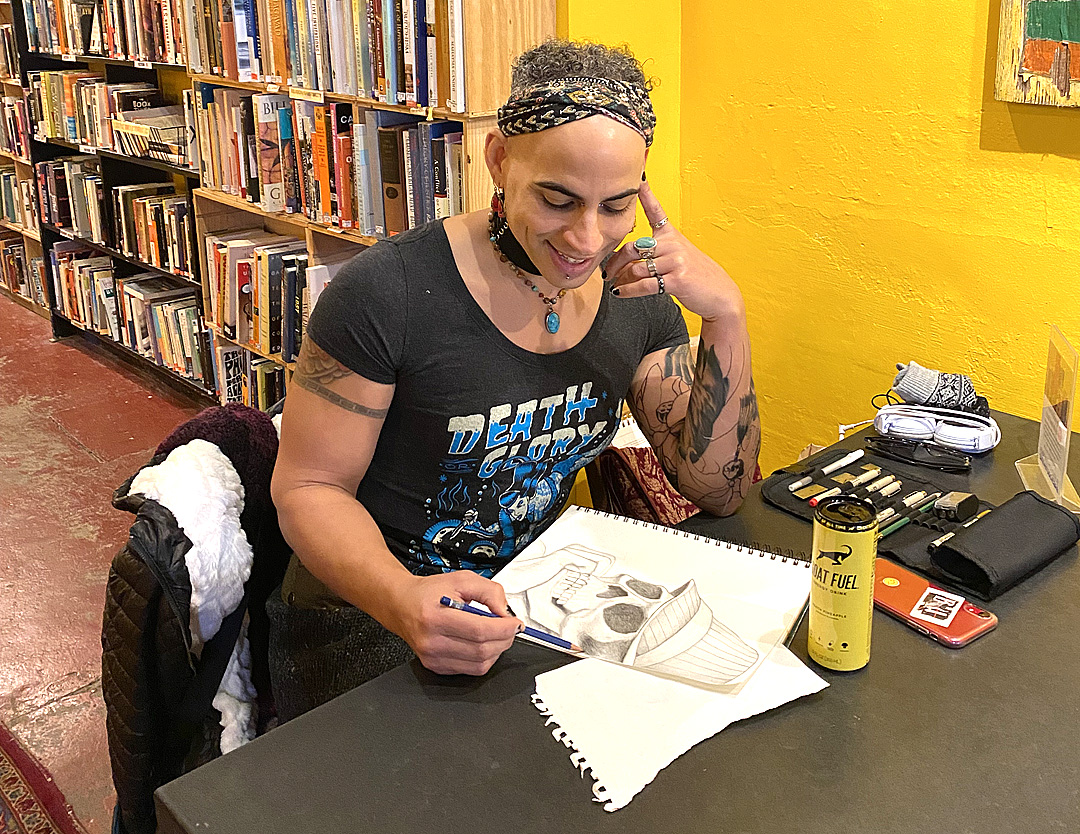 Iden Crockett at the Emporium — before the restaurant closed its dining room to patrons — drawing a piece she calls “Self Portrait.” The image is a skull with Crockett’s classic hat. At the time of its creation, Crockett questioned the meaning of the piece. (Photo by Alexis Lewis)

These questions, along with detailed storytelling and self-discovery, are expressed like a thread through each drawing, collage and poem of local artist Iden Crockett.

In a recent interview, Crockett told the News that her experience is one of defying odds and expressing herself in the face of mental illness.

Before moving into the art world, Crockett worked as a paramedic and firefighter for two decades.

As she wrote on her website: “It was exciting, stressful, dangerous, joyful, tragic work and I loved it. But there came a point when all of the stress and tragedy became too much for me.”

Crockett said that, during the course of her career, she encountered obstacles that triggered the onset of post-traumatic stress disorder, which fueled an eating disorder and self-harm. For these reasons, she decided it was time to leave the field of emergency medical services after 23 years.

Following her career change, Crockett came out as transgender in July 2020 at age 42. She said she found herself in a new position — one that she explained candidly.

“I don’t have to worry about money and I get to just really, truly, do and be exactly who I want to be, doing what I want to do,” she said.

Crockett marked the beginning of her transition as a period of excitement and gender euphoria, feeling “absolutely honest and unashamed.” She also leaned into her art: With no personal artistic background except coming from a family of jewelers, filmmakers, art teachers and musicians, Crockett became a full-time artist in June 2021.

Art became something healing to Crockett — something both necessary and therapeutic. In this way, she was able to better understand herself and discover new areas of her being.

“Art helps me identify some aspects of what I’m feeling that I haven’t been able to articulate consciously,” she said.

Crockett said the process of creating a cohesive piece is strictly guided by her more intuitive feelings. 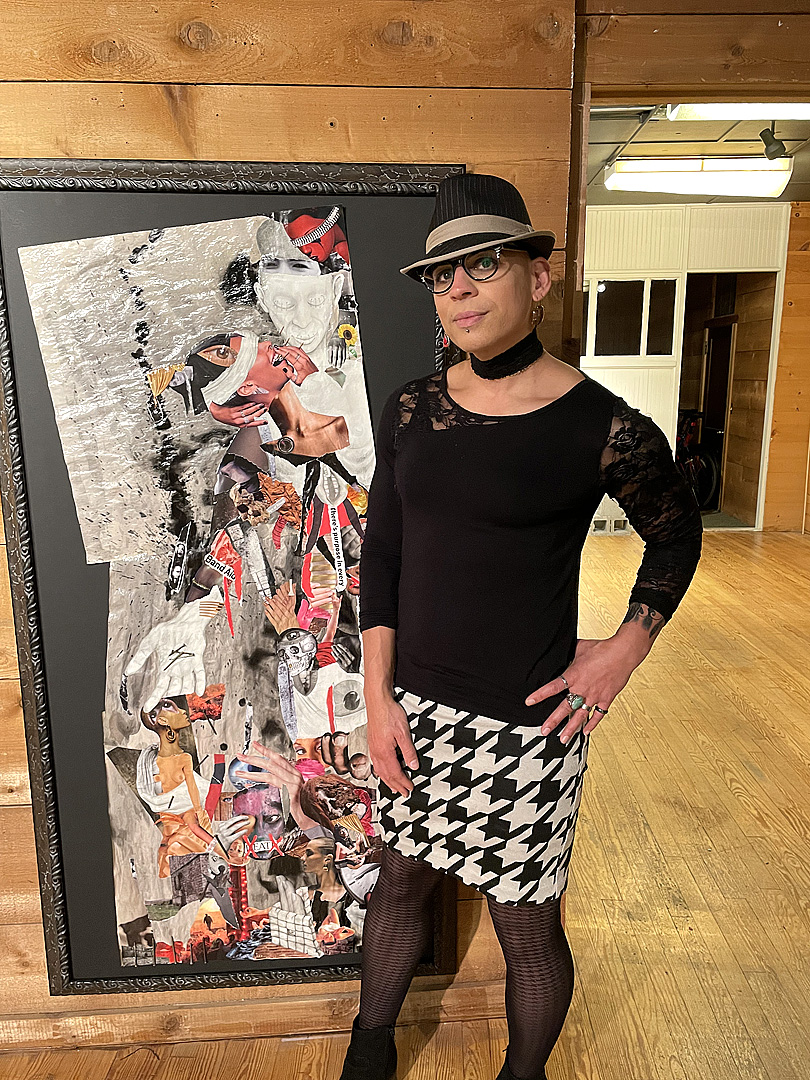 Artist Iden Crockett, pictured next to her collage painting at her debut exhibition, “Between the Lines,” last December. (Photo by Cheryl Durgans)

“If you can stand back a little bit and not try to control the piece too much and see where it’s going, you will say what you need to say in a piece,” she said.

All that Crockett knows before creating a piece is the blank canvas onto which she will collage.

She described the process of collaging as approaching the piece in ways other artists would paint. In this way, Crockett is able to focus on composition and depth of field with found images to create a sense of emotion, energy and movement in her pieces.

“I try very much to do collage as fine art,” she said.

Through her ability to be completely transparent about her struggles with PTSD, self-harm, eating disorders and gender dysphoria, Crockett said she is able to exchange information with her audience. She described her audience as a “filter” through which her work can touch and pass, like a prism, to the rest of the world.

Crockett regards her process and pieces as ways to better understand herself; despite this reflective attitude, she also said that sometimes she does not understand a piece while she is making it. With a retrospective view, Crockett compared the personal explication of her work to dream interpretation.

“To be a good artist,” she said, “you first need to be a good observer.”

Crockett said her choice to wait until about three-fourths of the way through a piece to add technical elements like color or structure is intentional. At this point in her process, she focuses on making her art “work as a piece, not as communication.”

The intersection of the COVID-19 pandemic and Crockett’s occupational and gender transition proved to be crucial to her growth as a woman and an artist. She said the pandemic has forced people to ask themselves questions, one of which she posed to herself: “What have I done with my time?”

She realized there was no time to waste.

The adoption of what she called a “desperate” philosophy has allowed her to create over 150 poems and 40 mixed media pieces within six months. In that short time, she also put together her debut exhibition, “Between the Lines,” which was displayed in December at 108 Dayton St. — a point of personal pride for Crockett.

Finding her own space, building her website, engaging on social media and putting an exhibition together was a feat. However, this production also meant working 60- to 70-hour weeks, leaving little time for her to spend with her wife, Dhyana Graham, and their three children.

This shortage of balance in her life is something with which Crockett said she continues to struggle. When she was a paramedic working 24-hour shifts, she would work a certain number of full days a week, giving her time to spend full days with her family away from work. In her new line of work, however, she’s the sole employee.

“Only I can make this art,” she explained. “Nobody can come in and cover me.”

The significance of her work ethic does not go unnoticed, however. As a parent, she resorts to late nights, creating until 3 or 4 a.m. to be productive.

Growing as an artist for Crockett looks like thinking, writing and creating exactly how she feels, with full disclosure. She said it also means creating a high volume of work.

By creating how she prefers, Crockett has shed the weight of outside opinion and reminds herself of a mantra: “It doesn’t matter what you do — just keep going, just move forward.”

Besides creating visual and written art, Crockett also finds comfort in making and listening to music, with a collection of CDs numbering in the thousands. The presence of music while producing art allows her to be present and create effectively.

By “doing what is enjoyable first before what pays,” Crockett said she is able to fulfill her need to create something meaningful.

When asked what she wanted to communicate with her art, Crockett answered very simply: “This is my journey and I am proud of it,” she said. “This is who I am and I am not ashamed of it.”

Crockett said she hopes those who view her art can experience this pride for themselves and wishes for them to be able to clearly see themselves and their lives and be content and happy.

Crockett’s work can be found on social media: @my_name_is_iden on Instagram, @mynameisiden on Tumblr, and on her website, mynameisiden.com. Crockett is also a columnist for the News.

*Lewis is a freelance reporter for the News and an English major at Wright State University concentrating in professional and technical writing. She is interested in rhetoric, English literature and all things sports and music. She can be contacted at lewis.594@wright.edu.