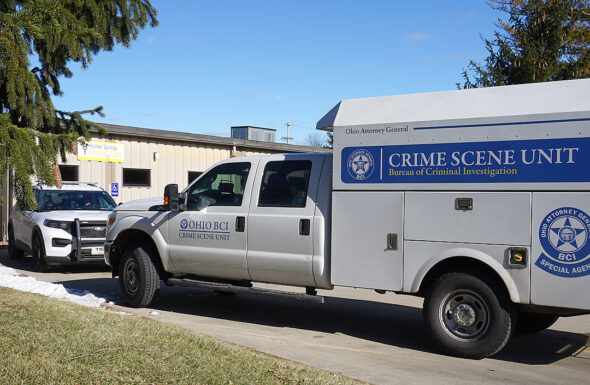 Investigators from the Bureau of Criminal Investigation and the Greene County Sheriff’s Office arrived Thursday, Jan. 20, at the Dayton Street medical office of Dr. Donald Gronbeck, Yellow Springs Primary Care, to execute a search warrant. An ongoing investigation of Gronbeck is related to allegations of sexual misconduct. (Photo by Jessica Thomas)

Yellow Springs physician Dr. Donald Gronbeck is the subject of a criminal investigation.

After the State Medical Board of Ohio suspended Gronbeck’s medical license on Wednesday, Jan. 19, investigators arrived at his Dayton Street medical office, Yellow Springs Primary Care, on Jan. 20 to execute a search warrant. An ongoing investigation of Gronbeck, led by the Ohio Attorney General’s Bureau of Criminal Investigation and the Greene County Sheriff’s Office, is related to allegations of sexual misconduct.

In an email to the News on Jan. 20, State Medical Board Communications Officer Jerica Stewart said the board convened a special hearing on Jan. 19 via videoconference and voted to issue a “Notice of Summary Suspension and Opportunity for Hearing to Donald Gronbeck, M.D., effective immediately.”

Stewart wrote: “A summary suspension suspends a license to practice prior to a hearing based on clear and convincing evidence that continued practice by the licensee poses a danger of immediate and serious harm to the public.”

Gronbeck has 30 days to request a hearing and is entitled to a hearing within seven to 15 days of the request.

The state medical board is prohibited by law from sharing details about individual complaints.

According to investigators, Gronbeck is accused of having sexual relationships and inappropriate contact with patients.

Gronbeck, a 2002 graduate of Antioch College, received his medical degree in 2009 from the Boonshoft School of Medicine at Wright State University, and worked for Miami Township Fire-Rescue. He is board certified to practice family and addiction medicine.

Gronbeck opened Yellow Springs Primary Care in 2014 and was also contracted by Antioch College as the school physician for a short time. In 2018, Dr. Jessica Gallaher joined the practice as its only other physician.

According to a News article about Gronbeck when he first opened the practice in 2014, he wanted to treat a range of ages with a focus on wellness care, including osteopathic manipulation, ultrasound testing, small surgical procedures and limited lab testing. He told the News he believed that wellness is best achieved in a place like Yellow Springs, which supports the whole person, including access to healthy food and strong community ties — things that make his job as a physician easier.

After fielding a call from one of Gronbeck’s patients asking how to get prescriptions filled and have medical issues addressed during the investigation, the News contacted Yellow Springs Primary care for information, but the call was not returned. The News will provide any updates regarding patient queries as they become available.

The Greene County Sheriff’s Office has created an online tip link through its website to report any information regarding Gronbeck and Yellow Springs Primary Care.

Go to http://www.greenecountyohio.gov/486/Sheriff and follow the link on the page to make a report. According to the Sheriff’s Office, sharing personal information is optional, but is needed if the investigation team has questions for the respondent.

A full and updated story will appear in the Jan. 27 issue of the News.