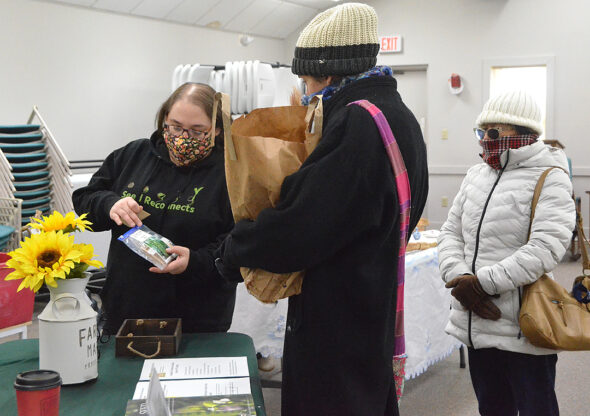 A seed is such a small thing. Nevertheless, if given everything it needs, it holds within it the power to feed, to flavor, to beautify and to multiply.

For seed stewards like Florentina Rodriguez, a seed also holds the power to create resistance — against a changing climate and dwindling biodiversity and food access. With that in mind, Rodriguez debuted the Yellow Springs Community Seed Library last weekend, aiming to make that power available to everyone.

The library exists in two iterations: The Main Seed Library is hosted at the YS Community Library, on a blue rack in the hallway outside the Virginia Hamilton Meeting Room. Seeds for vegetables, fruits, herbs and native plants and flowers will be available. Visitors to the Main Seed Library are encouraged to “check out” any number of seed packets, grow them, and return with seeds saved from their harvests to donate back to the library for others to plant.

The Traveling Seed Library operates every Saturday at the winter farmers market at the Senior Center from 9 to 11 a.m.; in the spring, it will move outdoors to the Bryan Center parking lot. A different seed is featured each week, with a focus on open-pollinated, heirloom and native plants, and visitors to the Traveling Seed Library are welcome to take a free packet of seeds each week.
Rodriguez spoke to the News at the Senior Center during the Traveling Seed Library’s debut. That week’s seed — the green arrow pea — was on display, and as market-goers approached to take seeds, Rodriguez told them about the library’s mission.

“The goal is for people to take seeds, grow them out, and if they grow well, they can save some and bring them back,” she said. “Then we can keep sharing them in the community.”

The traveling library is sited at Agraria’s farmers market booth, which Rodriguez regularly staffs, and which facilitates Ohio’s Produce Perks program. That program provides matching funds of up to $25 per day for those who qualify for and use the USDA’s Supplemental Nutrition Assistance Program, or SNAP, to purchase fresh produce from Ohio growers.

“[Produce Perks] helps people have more purchasing power for healthy foods, but then it also helps the growers and producers to get another client base that they wouldn’t normally have — instead of people buying from Kroger or Walmart, they’re able to buy from their local farmers and producers,” she said.

Since Rodriguez works the booth each weekend, she decided it would be an ideal place to — as the more animal-friendly version of the saying goes — feed two birds with one seed.

“That’s how I pitched it to Agraria: ‘I’m here every week doing this anyway, why don’t we put my traveling seed library here, and then it’s a bigger booth?’” she said.

The seed library was one of six projects chosen as part of the Sustainability Champions program that grew out of the Village’s Climate Action and Sustainability Plan in 2021, and Rodriguez said its genesis is rooted in her interest in connecting and educating communities.

Currently pursuing a Doctor of Education degree in environmental and sustainability education at Antioch University, Rodriguez said she had previously worked in and studied community outreach and community-based education for a decade. It was when she attended a Seed School at Agraria last year that she conceived of a way to bring community and sustainability together.

“I like community education, holding workshops, those kinds of things,” she said. “And then I went to Seed School, and I thought, ‘This is exactly the kind of stuff I want to do.’”

The Seed School’s intensive workshop, led by Beth Bridgeman, dug deep into seed-saving techniques, but also the importance of seed sovereignty — that is, the right to grow, save and exchange seeds. The experience was powerful enough for Rodriguez that she elected to create the seed library as part of the work for her dissertation, with Bridgeman as her mentor.

In her work at the Seed School and with Bridgeman, Rodriguez also learned about the historical influences that have made modern seed saving and exchanging something of a radical act.

“Prior to the 1920s, the USDA’s biggest program was distributing [free] seeds to farmers,” she said.

Beginning in 1839 through the U.S. patent office, and continuing through the USDA upon its formation in 1862, the federal government distributed more than a billion seeds for free to farmers.

However, seed companies — whose businesses, they reasoned, couldn’t grow if farmers could get all their seeds for free — began lobbying the government to shut the program down.

“So they successfully lobbied and stopped that program [in 1924] — and now the USDA’s two biggest programs are the Free Lunch Program and the SNAP program,” Rodriguez said.

“Because when you stop communities from being able to grow their own food, you create the cycle of dependency where you then have to give food back to them.”

Even though farmers lost their supplies of free seeds, they were still able to save seed stock from each season’s yield for the next season’s crop. However, in 1970, the Plant Variety Protection Act was passed, bringing seeds under patent law for the first time, and seed companies began to patent the genetic material in those seeds. By 2013, the Supreme Court had ruled that companies who held patents on certain genetic material could bar farmers from saving seeds from patented crops.

“The top four seed companies — which are all pharmaceutical and chemical growers like Monsanto, which was bought by Bayer — they own upwards of 50–60% of all commercial seed,” Rodriguez said, noting that the inability of commercial farmers to save seeds, and thus for crops to adapt to their environments over generations of planting, has diminished the biodiversity of the world’s food supply.

The seeds that the seed library offers are often heritage or heirloom varieties — that is, at least 50 years old and perpetuated over generations of seed saving — and are, importantly, not governed by patents. Many of the seeds are also open-pollinated — by wind, insects, animals or other natural means — and more genetically diverse.

“So the act of people saving their own seeds has become kind of a resistance against corporate interests,” Rodriguez said. “When you start getting into seed saving, people often have a bigger reason for doing it than just ‘I don’t want to get my tomatoes at the store.’”

By way of example, Rodriguez told the story of glass gem corn — also known as rainbow jewel corn, depending on how its seeds are sourced.

The corn was developed over a number of years by an Oklahoma farmer of Cherokee ancestry named Carl Barnes. By interbreeding several varieties and continuously selecting for the most colorful cobs, Barnes developed a variety of corn that produces a rainbow palette of kernels. Barnes later shared his seed with a fellow farmer, Greg Schoen, who continued to develop more colorful varieties.

However, as Schoen shared photos of the colorful corn online, it became popular enough that seed companies began to acquire and sell the seed — which was never what Barnes or Schoen had intended. Since then, the nonprofit Rocky Mountain Seed Alliance has offered free seeds for the rainbow corn to anyone who pledges to grow it and share it freely with others.

“So if you get your seed from Rocky Mountain Seed Alliance, it’s called ‘rainbow jewel’ rather than ‘glass gem,’” Rodriguez said. “If you get rainbow jewel corn rather than glass gem, you know it was grown from seed that was saved and shared in a seed saving network or community growth group versus seed that was bought from a catalog.”

Rodriguez herself has made the rainbow jewel pledge, and received a batch of 300 seeds that will be grown on the Antioch College farm by Farm Manager Bruce Linebaugh. Once the plants are harvested, Linebaugh will donate seeds from the crop to the seed library, where Rodriguez hopes they’ll pop up and add color to plots around the village the following year.

For those whose interest in obtaining seed from the library is piqued, Rodriguez had a handful of practical tips: first, saved seeds are best stored in a refrigerator until they’re ready to be used.

“There’s an Appalachian saying — ‘one for the fox, one for the crow, one to die and one to grow,’” she said.

When it comes time to save seeds from a crop, Rodriguez said it’s important to select them from the very best plants.

“That’s the way to be a seed steward — you want to preserve the health and integrity of the community’s seed stock,” she said. “So if you plant 10 and nine of them have been devastated by mold or disease or drought, the one that’s left probably has some type of mutation that’s pest-resistant or drought-resistant.”

Selecting the best seeds every year is doubly important, Rodriguez said, as the climate continues to change. She referenced the world’s seed banks, which hold seed stock in vaults in an effort to preserve and conserve genetic diversity.

“The idea is, if a natural disaster happens, you’ve got all these seeds — but if the seeds are from, maybe, the 1970s, when the environment was different, there’s no guarantee that they’re going to grow out,” Rodriguez said. “But if you plant beans this year, the ones that grow well in your region you’re going to save, so now you’ve got beans that are locally adapted to your region — it’s like creating a seed bank in real-time.”

For more information on how to use, support or volunteer with the Yellow Springs Community Seed Library, contact Rodriguez at yscommunityseedlibrary@gmail.com.