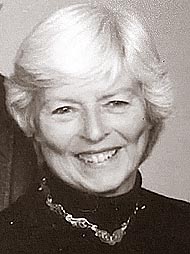 Evelyn was born and raised in East Cleveland, Ohio. She met Walter Sikes while they were students at Oberlin College, and they were married on June 19, 1947. They settled into a house on Pleasant Street in Yellow Springs, where Wally had been offered a job at Antioch College.

They immediately made friends and became very active socially. Evelyn said that if they didn’t have a party to go to every weekend, they felt like losers. Wally and Evelyn were lifelong members of the YS Presbyterian Church and Cash Club members for over 50 years.

Evelyn was a voracious reader up until her death. She loved playing games, mostly cribbage and Scrabble, and always found the elusive balance between competition and graciousness. She loved to laugh and was a fiercely loyal friend. She and Wally were very lucky to have friendships that lasted decades, notably with her sister Esther Gressard, Ruth and Tony Bent, Bear and Patty Maneri (with whom she ran the Mollador for 30 years, which mostly consisted of going to flea markets and playing Scrabble), and Franny Gifford (with whom she taught at the YS nursery school in the 1950s). Evelyn also kept in touch with many of her girlfriends from Oberlin even as they were spread across the country and into their 90s.

Evelyn loved good food and was never known to skip dessert — or, frequently, a second helping of dinner. She loved to travel, and she and Wally set off on many adventures throughout the years, to Mexico, Europe, Hawaii and the Caribbean. Most summers were spent at the family cottage — first, the Hisey Cottage, and later, the Sikes Cottage — on Crystal Lake in Michigan.

Evelyn attracted friends everywhere she went and Crystal Lake was no different. Her daughters, grandchildren and great-grandchildren share many memories of Michigan fun, much of which was made possible by Evelyn’s behind the scenes love and care: waffles in the morning; lunch on the beach; cherry pies, usually without the pits; beach picnics; lots of cribbage (she usually won); and puzzles and books in front of the fire, which was her favorite part — other than the aforementioned cribbage winning.

Evelyn was curious by nature, with a quick wit and a strong sense of justice. She remained involved in politics and, in her final years, would frequently set her goalposts to live until the next election. She leaves a legacy of acceptance and love, a strong sense of right and wrong, a spirit of kindness, a balance of optimism and a drive to make things better.

Evelyn and Wally raised three daughters, were loving and involved grandparents and great-grandparents, and opened their home throughout the years to many “adopted” children and multiple dogs, cats and other assorted animals. Evelyn loved people and her home was always one full of warmth and hospitality. She lived by the motto, “A clean home is a sign of time misspent.” There were usually kids, bikes, games and toys all over and around her house, which was the way she liked it. Walking into her kitchen, you may have had to check the expiration date on most things found in the refrigerator, but you could always count on being welcomed with a big smile, engulfed in a hug and usually treated to a loving back scratch.

Evelyn was preceded in death by her parents, Anna and Ralph Hisey; her beloved sister, Esther Gressard; and her husband, Walter Sikes. She is survived by her three daughters, Linda Sikes, Becky Sikes and Debby Sikes Newsome; her son-in-law, Brent Newsome; her six grandchildren, Naomi, Tiffany, Nicole, Steve, Kevin and Marley; seven great-grandchildren, Isaac, Ilias, Nora, Isabel, Elise, Simon and Stevie; and many nieces and nephews, other family members, friends and neighbors.

Evelyn saw death much as she approached life: as a great mystery and an adventure. We know she spread love and joy and acceptance during her life, and we hope she will continue to inspire those same qualities in death.

In lieu of flowers, please consider donating to Glen Helen or the Yellow Springs Schools and take some time to sit on the floor and play with your loved ones.