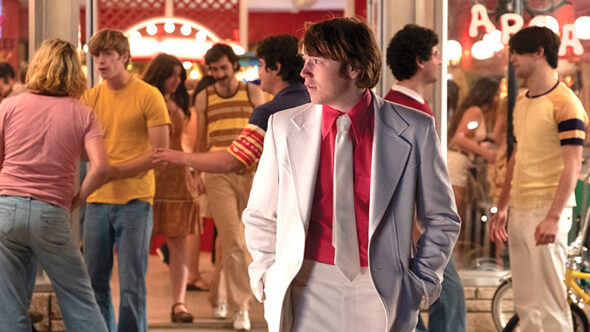 Held over from last week, “Licorice Pizza” will screen at the Little Art Theatre through Monday, Feb. 21. (Film still: MGM/Everett)

Remember how it felt being a teenager? The adrenaline-fueled highs that came with your faux invincibility? The sublime optimism or gut-wrenching dread you felt when staring down the barrel of the rest of your life?

What about falling in love for the first time and how self-conscious you were?

Perhaps you rather wouldn’t, but of course you remember. Now, are you sure those memories are reliable?

While I can’t be certain, I believe director Paul Thomas Anderson’s recent blockbuster film “Licorice Pizza” wants to remind us of all the thrills, seductions and dramas of adolescence.

It’s more than just a coming-of-age story, though; it’s a story about a specific place in a specific time. “Licorice Pizza” is set against the glitzy backdrop of the Hollywood-adjacent San Fernando Valley in the `70s. Naturally, the film gestures toward the pitfalls of fame and capital — specifically, the malleability of identity when placed under the garish illumination of the limelight, or when there’s cash on the table.

But despite Anderson’s very intentional provocations (more on that later), “Licorice Pizza” is, at its core, a tender story.

At 25 years old — or perhaps even older, as her story changes throughout the film — Alana is adrift in life. When we first meet her as a photographer’s assistant, she has little autonomy. She walks around holding a literal mirror to the other characters. Flush with connections and resources, Gary — with his unyielding bravado and goofy charm — quickly goes from flirting with Alana to promising her the keys to the castle. With his help, she can transcend the banalities of townie life and become the actress Gary knows she was meant to be.

As the audience knows, the road to and from stardom is rocky at best, so it should come as no spoiler to say that Gary and Alana never quite get to where they want to be. And that’s fine! The movie’s overall plot is negligible. In “Licorice Pizza,” Anderson wants to play with his primary characters like Barbie dolls — bouncing them off one another, letting their different motivations be the engine that drives the chaotic sequence of events forward.

Which brings me to address that elephant sitting uncomfortably in the corner.

A number of critics have come out of the woodwork to condemn “Licorice Pizza” for portraying a semi-ambiguous, albeit complicated relationship between Gary and Alana — that is, between a minor and an adult. Over and over, the age difference comes to the fore; Anderson pronounces it whenever he can. See: Gary ordering two Cokes at the bar or Alana getting tangled up with middle-aged Hollywood has-beens.

Just to be clear, at no point in the movie does the pair’s friendship turn sexual. Their mutual enchantments with the other are more rooted in aspirations than pat romance. Just as Alana springboards off Gary to further her interests, so too does Gary rely on Alana to get his hair-brained enterprises off the ground. (There’s a whole water-bed business sequence that I won’t spoil.)

There are, however, blatant displays of power differentials. A white restaurateur (John Michael Higgins) speaks to his Japanese wives with a racist parody of Japanese-accented English. Even his white waitresses are painting themselves with geisha-esque makeup. Earlier, Alana is sexually harassed by her boss. At one point, Gary is victimized by police who have no intention of issuing any mercy or due process.

All of these moments in “Licorice Pizza” are some of the most significant in my mind — precisely because of their grotesqueness. They interrupt what would otherwise be a continuous stream of dream-like reflections of a bygone and bedazzled era. And for those of us whose lives are harried by the attendant problems of the digital age, a timepiece set in the early ’70s can seduce us into believing those years were “simpler times.”

Anderson cautions us against falling into those nostalgic trappings.

The tense macropolitics of 1973 — just like the gross microaggressions leveled against the characters — are woven into the fabric of the narrative to jog our collective memory that things have never been as shiny as they appear on the silver screen; that we’ve always thought the world is ending. As such, Anderson resists the cheap retro-baiting we see littering pop culture in media such as “Stranger Things,” myriad “Star Wars” reboots and Taylor Swift albums.

There’s no doubt about it: nostalgia is a growing industry. Although “Licorice Pizza” reaches for a slice of that pie, it nevertheless sets itself apart. Anderson shows audiences that while some things mature and wither away with the passing of decades, other things — namely the lust for life itself — never fade.