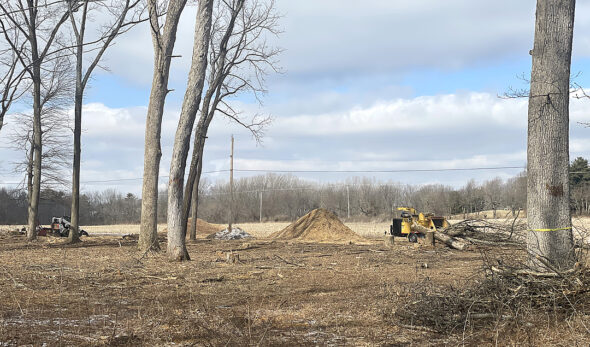 Shortly after Village Council voted down Oberer’s PUD application, the development company began clearing trees on its property in preparation for building a single-family home development. (Photo by Cheryl Durgans)

In the days after Village Council voted down the Oberer Development application to rezone 52.6 acres on the south side of town as a planned unit development, many residents are left with the question, “What’s next?”

Oberer has already taken action toward preparing the property in order to move forward with development. Days after the vote, crews began clearing trees on the property, but according to Council member Marianne MacQueen, Oberer has agreed to spare some oak trees that MacQueen and two naturalists in the village, Vickie Hennessy and Kendra Cipollini, have identified on the property.

“On my walk with Kendra, we found what I called a Mother Oak Tree,” MacQueen said. “I had learned from my work with the Habitat Team that oaks are a keystone species, and clearly this oak was old and it was critical to save it. When I got home, I immediately contacted Greg Smith with Oberer about the tree and he asked for the location so they could identify it to save it.”

While the land is prepared for development, Oberer will have to follow an administrative process in order to begin building on their property, according to YS Zoning Administrator Denise Swinger.

“Oberer will need to submit a Preliminary Plat to the zoning administrator,” Swinger wrote in an email to the News. “Once I’ve reviewed the plan for conformance with the zoning code, I will submit all materials and a memo to Planning Commission for an ‘adjudicatory review.’”

While the current zoning map includes several parcels of land zoned PUD and Residential-C, or high density residential, Swinger said that Oberer can choose not to build to the maximum density.

“The lot sizes, lot frontage and setbacks in the zoning code are the minimum requirements, not the maximum,” she said. “In Residential-C, [a property owner] could take an acre of land and make it one parcel with one home if [they] desired.”

As for the portion zoned PUD, Swinger said the underlying zoning is Residential-A, or R-A, and “as long as the plat is laid out for R-A, it follows code.”

This means that while both Planning Commission and Council consider the Village’s Comprehensive Land Use Plan, or CLUP, they have to apply the Village’s current zoning code in their decisions. The CLUP was adopted by Council through an ordinance, but it works as more of a “guide” than the zoning code. In other words, zoning codes are derived from the goals of a CLUP, but the CLUP itself is not a zoning document.

“Whenever there is a new project, we always take a look at the Comprehensive Land Use Plan to see if the proposal meets the overarching goals within the comp plan,” Swinger said.

“[Compliance with the CLUP] strengthens the application, but doesn’t necessarily prevent it [being approved]. Council has to look at the uses spelled out in the zoning code by district to determine if a project can or cannot happen within a given area.”

Swinger said that Oberer can submit a final plat as soon as they are ready. That plan will go to both Planning Commission and Council for final review.

“Council cannot deny the plat unless they find that the plat is not in compliance with the zoning code,” Swinger said. “Should Council deny the final plan for the plat [if in compliance], Oberer can immediately file a complaint per ORC 711.09 (C).”

In other Council business, Feb. 7:

In an emergency ordinance, which will only receive one reading, Council voted to approve first quarter supplemental appropriations. According to Finance Director Matt Dillon, the request is for $724,000, with budget items coming from the general fund and the enterprise funds. Larger budget items include appropriations for Lawson Place apartments, water, sewer, and electric funds.

“This is more of an accounting treatment to catch up to the invoice dates rather than the payment due dates,” Dillon said.

An expenditure of $238,000 will go toward closing on Lawson Place apartments. According to Village Manager Josué Salmerón, the closing costs for Lawson Place were appropriated in the 2021 budget, but since the closing happened in 2022, the expenditure needed to be adjusted accordingly. The number also included mortgage and utility payments. Other budget items included expenditures for personnel.

Council approved a resolution to pay invoices with a “Then and Now” certificate for the first quarter of 2022. A Then and Now certificate is a statement verifying that funds to pay invoices were available at the time of purchase. In this case, Salmerón explained that a purchase order for a contract with CBIZ valuation group was not written in a timely manner.

Dillon said that the other items included in the Then and Now were payments to the IRS and additional loan payments to Ohio Public Works and the Ohio Water Development Authority. The loan payments will be made in order to “clean up” the budget.

”This doesn’t relate to an additional payment owed,” Dillon said. “This is more of an accounting treatment to reflect those [payments] in the year the invoice is dated instead of the year the payment is due.”

The payment to the IRS is to settle a balance owed from previous administrations. Dillon said that he is in contact with the IRS to determine whether the money is actually owed, but he intends to make the payments so that the Village will not accrue further interest and penalties.

“I do not pay bills which I do not understand,” Dillon said. “In this case, what we are attempting to do is bring our account current while we seek further information.”

Council approved a resolution to purchase a sludge press for $156,000, which Salmerón said will save the Village $21,000 per year in rental costs. More coverage of this will appear in a future edition of the News.

• In his Village Manager’s report, Salmerón said that the ongoing search for a police chief is nearing a close. He is in the process of scheduling interviews between the candidates and Council and organizing a “meet the police chief candidates” community event.

• Council member Lisa Kreeger announced that the Village Mediation coordinator, Luciana Lieff, has resigned, and that Kreeger and MacQueen will be brainstorming with members of mediation to see how the future coordinator of the mediation program can help get the citizen review board off of the ground. According to Kreeger, this move would follow the model of other municipalities in the area; for example, Dayton’s citizen review board is coordinated by members of their mediation program.