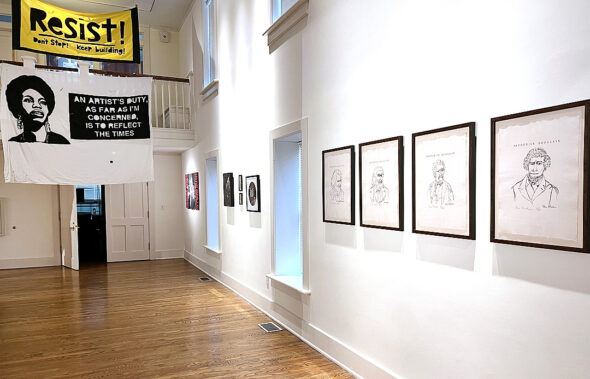 “Black History: A Work in Progress” is a new exhibition on display at Antioch’s Herndon Gallery through March 28. The multimedia show features works from about 20 sources that have a tie to Antioch College and/or the area. (Submitted photo)

In “Black History: A Work in Progress,” a new exhibition on view through March 28, gallery visitors are invited to serve as witnesses and in turn celebrate the contributions and “constant influence” of Black lives in the United States as well as this specific area of the country.

The multimedia show features works from 20 sources, each having a tie to the college and/or local community, according to Michael Casselli, chair of Antioch’s arts division and Herndon Gallery’s interim creative director.

The exhibition’s featured artists cross generations and chosen forms of expression. A number of the participating artists are also known for creative pursuits beyond the visual realm, including musical, literary and theatrical arts.

John Sims, who graduated from Antioch in 1990 with a degree in mathematics, exhibits his math- and activism-informed art work in exhibition spaces across the country. A native of Detroit who most recently has been based in Florida, Sims was the founder in 1991 of Antioch’s African American Cultural Week, which eventually evolved into the longstanding African-American Cross-Cultural Works organization that hosted a blues festival in the village for more than 25 years.

In 2016, Sims told the News that African American Cultural Week was part of a project that began by taking a group of Antioch students to various locations of Black cultural significance in the deep South. He said that, in instituting African American Cultural Week, he wanted to show the students — and the community — that Black culture can also be experienced right here in Yellow Springs.

This perspective is part of the thinking behind the Herndon Gallery show.

“The frame, for lack of a better word, is in recognizing and celebrating Black history and Black folks’ contributions across different aspects of the culture, and how those contributions have come from this area specifically,” Casselli said.

“The common connection is in the intersectional nature of our relationships to each other in this part of Ohio, and the recognition that the eclectic mix of materials in the exhibition further demonstrate that Black history is [American] history,” Casselli continued. “It appears everywhere, and … its importance transcends the idea that one month a year provides adequate representation. This practice only makes it easy for people to compartmentalize the work that is ongoing 24 hours of the day, 365 days of the year.”

Shahn, a social realist painter who died in 1969 at 70 years of age, is represented by four Antioch-owned portraits of Frederick Douglass and portraits of murdered civil rights activists James Chaney, Andew Goodman and Michael Schwerner, also owned by Antioch. Schwerner’s brother, Steve, is an Antioch alum who later taught and served in the administration at the college. Goodman’s brother, David, is also an Antioch graduate who has remained actively involved in supporting the college.

According to Civil, the goal of her work “is to open up space.”

Participating groups include The 365 Project, which promotes racial equity; the equal rights community organization H.U.M.A.N., which stands for Help Us Make A Nation; and The People’s Banner Workshop.

The People’s Banner Workshop is an ongoing project facilitated by Yellow Springs-based artist Migiwa Orimo. The workshop, according to its website, collaborates with various activist groups to create banners, signs and props to be used in “direct action, protest rallies, picket lines and other street actions for social justice.” The effort is “grounded in the notion of ‘Citizen Artists,’ [and] welcomes participation of both artist and nonartist citizens to amplify their collective voice.”

Herndon Gallery is located on the first floor of South Hall, on the Antioch College campus. Hours are 1-4 p.m. Tuesdays through Saturdays. Admission is free.