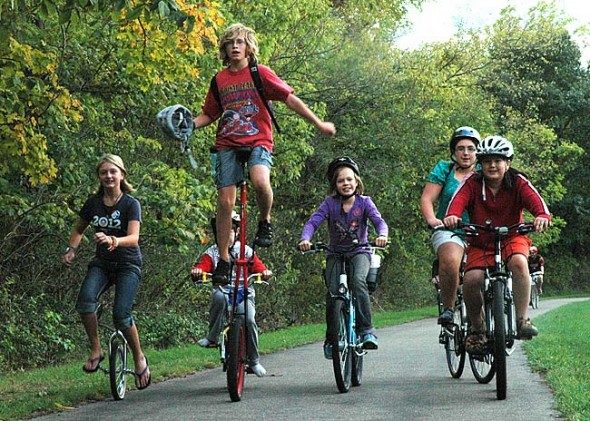 When you’re 7 or 8, the legacy of your school’s 100-year history isn’t nearly as exciting as reaching the 100th day of the school year.

One-hundred-years — an entire century — can be hard to wrap your head around, but 100 days is a little more tangible. At least it was recently for students in the 100-year-old Antioch School’s Younger Group as they marked their 100th day of classes with a variety of hands-on activities: stringing 100 pieces of Cheerios cereal into a necklace, making chains of 100 strips of construction paper, painting 100 dots of color on a single piece of paper, writing all the numerals from 1 to 100 on long rolls of paper.

“I did it,” one youngster exclaimed, finishing her paper-roll sequence. “I’m going to do some more!”

Another student wondered aloud about the results of writing one through 10 over and over.

“Try it,” Younger Group teacher Elaina Vimmerstedt responded. “How many groups of 10 will you need?”

Turns out, writing one through 10 over and over 10 times is as much work as numbering 1 to 100, and it’s harder to keep your place.

No matter the activity, getting to 100 of anything takes time and effort, the children learned. But with such a milestone comes pride and a sense of accomplishment. 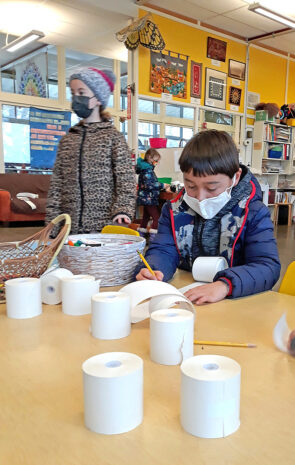 The Younger Group class at the Antioch School recently marked the 100th day of classes this academic year, which is the school’s centennial. (Photo by Carol Simmons)

Those emotions ring true for the Antioch School community as well, as the school looks back on the 100 years since its founding in the fall of 1921 and looks to the future in a world where its supporters believe the school’s version of child-centered education is needed more than ever.

“It’s pretty incredible,” School Manager Nathan Summers said of the anniversary in a recent phone interview. He added, though, that reaching such a moment amid a once-every-100-years pandemic wasn’t the kind of milestone marker they wanted.

In fact, the pandemic caused the postponement of some of the festivities that were supposed to begin last summer.

“We were planning to have a big celebration last summer and try to draw some alumni back into the school,” he said. The alumni count is, of course, in the hundreds, and includes such well-known names as actor John Lithgow.

The general lockdown in March 2020 also occurred just days before that year’s annual fundraising auction and gala, which, like everything else at the time, was canceled.

The pandemic led to the cancellation of the event in 2021 as well, but it’s coming back this year with a May 6 date at the Foundry Theater on the Antioch College campus. Summers said he is “very happy” that the school is able to begin bringing back more of its regular activities.

Weathering the pandemic has been hard, he said.

“It’s been the most challenging thing I’ve experienced in my working career,” he said.

While he believes that the school’s small size, tight-knit community and integration of outdoor learning experiences made it well-positioned to meet the pandemic’s challenges, it still exacted a heavy toll.

The biggest effect was on the community’s sense of connection, he said. Without the traditional activities and events — class performances, soup dinners, work bees — drawing them together, families became more separate from each other and the school. A pandemic protocol requiring students to enter the building through their classrooms’ outside door relieved a bottleneck of students and their grownups at the front of the building each day, but also eliminated an important time for the adults to mingle and catch up with one another.

“We are very, very eager to get all of those things back again,” Summers said. “We are eager to rebuild those relationships.”

Love for the school runs deep among its families. Moriel Rothman-Zecher, 32, attended the school as a child, as did his father, Jay Rothman, 63. Now Rothman-Zecher’s daughter, Nahar, is a student in the Nursery class. The young father has said that he and his partner, Kayla, moved back to Yellow Springs after living abroad in large part because they wanted Nahar to have the growing up experiences — specifically an Antioch School education — that had been so important to his own development.

“The Antioch School cherishes freedom, and that is no small thing in this world of ours,” he recently wrote.

He noted that his father, who holds a Ph.D. in international relations and has published five books, wasn’t able to read until he reached a fifth-grade level.

“Instead of being shamed for learning differences, Jay was allowed to flourish in his own time,” Rothman-Zecher wrote.

“I’d say that a large part of who I am — a novelist, a poet, a teacher of creative writing — has its roots in my time at Antioch,” he added.

Founded by then-Antioch College President Arthur Morgan as a teacher-training laboratory for the college’s students, the original school went through 12th grade. There was to be “close, open-minded observation of the children, with a molding of the school program to suit the children’s needs, rather than forcing them to fit a rigid and artificial curriculum,” according to a school history.

“Children were encouraged to progress at whatever rate natural capacity, health and vitality made possible.” The approach was experimental, and it is believed that students were not graded.

All 12 grades were housed in the former William Mills house, which stood on the grounds where Yellow Springs’ Mills Lawn Elementary School is located. In 1929, the school dropped the junior high and high school sections and moved into the Bryan High School. The school moved into its current building on Corry Street in 1953, eventually adding a Nursery class. Today, classes are divided into Nursery, Kindergarten, Younger Group (approximately first through third grade) and Older Group (typically fourth through sixth). 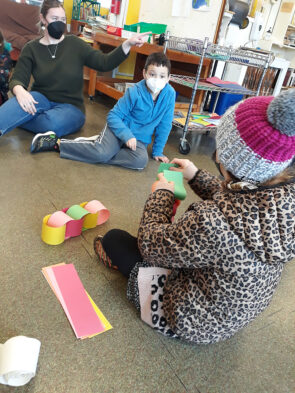 Making chains with 100 pieces of construction paper was one of the activities celebrating the 100th day of school recently in the Antioch School’s Younger Group classroom, taught by Elaina Vimmerstedt. The school is celebrating its centennial this academic year. (Photo by Carol Simmons)

“Arthur Morgan didn’t call it a democratic school, but that is what we are,” Summers said. “That label basically says the children have a significant amount of say in how they approach their day at school.”

It also described the school’s lack of hierarchy among the staff. As school manager, Summers handles many administrative functions, but unlike a traditional principal, he is not superior to the teachers and staff. Daily decisions are made as a group. The board determines the “bigger picture,” such as philosophy, goals and direction.

In anticipation of the centennial, the board and staff had begun some strategic planning work a couple of years before the pandemic hit.

Summers said the focus was on the school’s financial wellbeing, increasing the endowment and increasing scholarship opportunities so that cost was not an obstacle for anyone wanting to attend.

Enrollment is currently at about 50 students, which is about 10 fewer than before the pandemic and 10 more than last year. Enrollment has been kept lower this year and last because of the pandemic. Current staff includes five full-time teachers, two part-time assistant teachers, a part-time after-school teacher and two part-time office staff members.

Summers, whose two children attended the Antioch School (one is now at Yellow Springs High School and the other is at Dayton’s Stivers School for the Arts), said he loves being part of the school’s life.

“From my desk, I have a complete view of the playground,” he said. “I love being a fly on the wall and watching the students interacting with each other and coming up with games, being totally joyful with each other. It feels really great to be doing work that contributes to that joy.”

The school is planning an open house for prospective families on Sunday, April 3, from 1-3 p.m.