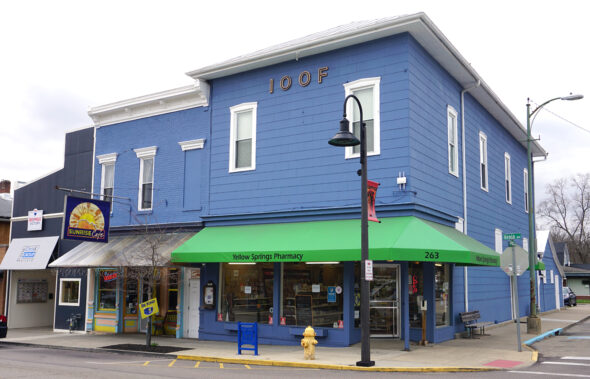 Editor’s Note, March 25: The News has since learned that Zellner resigned as pharmacist. In a follow-up call this week, he told the News that he gave his two-week notice five weeks ago and will continue to work at the pharmacy until the company hires another pharmacist. He reportedly informed staff of his resignation after this story went to press.

Recent changes at the downtown pharmacy are raising questions about the business on the northeast corner of Xenia Avenue and Glen Street.

The site of a pharmacy for more than 90 years, the shop has been owned since 2018 by the Florida-based Benzer pharmaceutical company, which bills itself as an independent alternative to the large chains while operating more than 120 pharmacies in 16 states.

A letter to the editor alerting the News about a policy change concerning the availability of what is familiarly known as Plan B contraceptives at the local drug store led to a closer look at the business that revealed issues with the parent company. (See page 4 of the March 17, 2022, print edition of the News for the letter.)

Concerns with the business have been raised before. The discontented resignations of both the full-time and part-time pharmacists in fall 2019 raised an alarm at the time that was temporarily quieted by a change in the company’s supplier and a refocus on local service in early 2020. A newly hired pharmacist, Jeremy Nestor, appeared to be settling into the manager’s position, and Benzer’s Ohio regional manager, Chris Lenz, offered assurances that the company had turned a corner and was stabilizing after a period of too-rapid growth.

Since then, at least one other personnel turnover has occurred, though the changes went relatively unnoticed amid the pandemic lockdown and subsequent COVID-19 protocols. Nestor appears to have moved on by mid-2020, according to state pharmacist records; and Lenz was let go in February 2020 as part of a massive company reorganization that included the lay-off of all of its regional managers, according to an extensive investigation into Benzer’s practices by Time magazine published this past October.

The newest pharmacist is Kent Zellner, 62, from Tiffin, Ohio. Zellner owned and operated Zellner Pharmacy in downtown Tiffin for nine years, until it closed in 2014, according to online records, which also show that he became the co-owner of ZellMay Construction that same year. A graduate of Ohio State University, he held other pharmacist positions before opening his own shop.

Zellner apparently makes the two-hour-and-15-minute one-way drive between Tiffin and Yellow Springs each work day. He declined a full interview, but responded to the concern raised by the letter writer.

Zellner confirmed that he has discontinued carrying Plan B contraceptives at the pharmacy.

“They’re against my religious beliefs,” he said.

State law allows him to make that call.

A number of states have in recent years adopted so-called “conscience” legislation, giving pharmacists the leeway to make personal decisions about what medications they distribute. Ohio’s Gov. Mike DeWine signed a similar provision this past summer.

“Plan B” medication, sometimes called a “morning-after pill,” is a brand name of levonorgestrel, a hormonal medication that can prevent pregnancy if taken after intercourse, generally within three days, though some brands claim up to five days of effectiveness. Brand names in addition to Plan B include Afera, EContra EZ, Fallback Solo, My Choice, My Way, Opcicon One-Step, Option-2, Next Choice One Dose and Take Action.

The medication prevents the release of an egg from the ovary or prevents fertilization of the egg by sperm. Medical sources say it also may change the lining of the uterus to prevent development of a pregnancy.

Opponents have referred to it as an abortion pill, while many medical professionals classify levonorgestral as a form of contraception to be taken in an emergency situation after unprotected intercourse or when regular contraception fails. The medication is generally available over the counter, but some brands require a prescription.

Local customers report getting the medication at the Kroger pharmacy on Dayton-Yellow Springs Road after being turned away at the Yellow Springs store.

Learning more about Benzer’s current operation and contacting a regional representative for information are challenges. The company appears to have erased or removed much of its online presence. Its former website no longer exists, and no new website has taken its place. LinkedIn and Wikipedia pages for the company feature only a summary description and include an online link that takes visitors to an error page. The corporate Facebook page appears to have been deactivated, and corporate contact information found online leads to a local pharmacy in Tampa.

A visit to the Yellow Springs drugstore shows no evidence of its association with Benzer, and the relatively new outdoor Benzer signage has been replaced by a Yellow Springs Pharmacy sign.

The shop appears to be short-staffed — Zellner was alone in the store recently after a pharmacy tech called in sick, and the hours have been reduced to 10 a.m. to 5 p.m. weekdays. Benzer recently advertised with online employment sites for a part-time “floating” pharmacist in Ohio whose area of coverage would include Yellow Springs.

The recent Time magazine article uncovered a host of irregularities in the company, including lawsuits against some of its top executives for fraud and illegal drug distributions. None of the charges have ever been tied to the Yellow Springs location, however, and most online customer reviews express appreciation for the “friendly” service they find there.

CORRECTION: An earlier version of this story listed Kyleena, Mirena and Skyla among the brand names that offer levonorgestrel, the hormonal medication used in emergency contraception. While those brands do provide levonorgestrel, it is in the form of an IUD, not a pill, and is only available in a medical setting, not through a pharmacy.