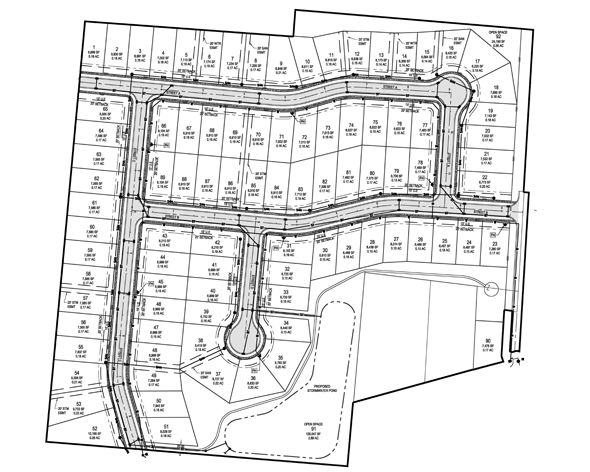 EDITOR’S NOTE: On Wednesday, March 30, Village Manager Josué Salmerón notified the News that the proposed subdivision had been renamed “Spring Meadows.” According to Salmerón, Village staff and DDC Management wanted to prevent further confusion about the subdivision, previously named “Glass Farm Estates,” being sited on Glass Farm. The subdivision would, in fact, be located adjacent to the Village-owned Glass Farm.

Each lot — averaging around 0.25 acres each — would be able to contain one single-family, detached residence.

Despite the intended name, the land sits adjacent to the 42-acre Village-owned Glass Farm.

The land is presently owned by village resident Dianne Kinney, and the property’s sale is listed on Zillow as pending, selling for $735,000. Brokering the sale is Rick Kristensen of Re/Max Victory.

Last week, DDC submitted a preliminary plan and hearing request to the Village for the major subdivision. At the end of the Planning Commission’s most recent meeting on Tuesday, March 15, Planning and Zoning Administrator Denise Swinger announced DDC’s intentions to build, and said the commission will likely conduct DDC’s hearing at its next regular meeting on Tuesday, April 12.

“This will follow the major subdivision language in the planning code,” Swinger said at the meeting.

“The developers do not want to do this as a PUD [planned unit development]; they want to do a straight R-B, or moderate-density, residential plan.”

According to the Village’s Zoning Code, R-B moderate-density zoning is defined by medium sized lots, intended to encompass much of the village’s existing single-family and medium-density residential neighborhoods.

Pending the plan’s approval, Sears said DDC intends to break ground and begin developing the land for future homebuilding in spring 2023. Over the following months, the company would build out the proposed neighborhood’s roads, public utilities and a stormwater pond. Kenneth Hamilton Way and Wright Street would be extended into the proposed neighborhood.

According to Swinger, DDC would also be required to dedicate a small portion of land for a Village-owned park, per requirements in the planning code.

“Although they are not required to do anything else, Village staff has reached out for a possible land donation for affordable housing,” Swinger added.

Calling it a “one-phase project,” Sears said DDC would complete the establishment of infrastructure at the site in fall 2023.

Sears said that throughout the process of building the site’s infrastructure, DDC will conduct traffic studies and environmental surveys. However, according to Swinger, these studies are not required for a proposed subdivision that complies with the existing zoning.

DDC will sell the lots on the open real estate market, and then a builder or homebuilding company may purchase each individual lot or all the lots together, depending on how DDC chooses to list their land.

Although DDC has worked with homebuilding company Ryan Homes for some past development projects, Sears said “it’s still too early to tell” if Ryan Homes will play a role in this proposed subdivision.

“We are excited for this project and to partner with the Village of Yellow Springs,” Sears said.

According to Swinger, the timeline for the proposed subdivision’s approval is both straightforward and exacting.

As established by Ohio Revised Code Section 711.09, Planning Commission must act within 30 days of submission of a preliminary plat, otherwise its approval is automatically granted.

Abiding by this deadline, the commission will convene next month, on April 12, to weigh the proposed plat against the criteria outlined in Section 1226.03 of the Village’s Codified Ordinances. From their deliberation, commission members will vote to approve, approve with modifications or disapprove the plat, based solely on whether or not it meets the Village Zoning Code.

If Planning Commission does approve the preliminary plat, then the applicant — DDC in this case — may immediately submit a finalized plat proposal for the commission’s consideration, or the applicant may wait up to 12 months. For the final plat, Swinger said Village staff will have a civil engineer review the plat’s street design, stormwater detention design and other infrastructure. The reviewer will provide a report to Planning Commission with recommendations for the body to discuss when considering the final proposal.

From Planning Commission, plans for the proposed subdivision move to Village Council for ultimate approval. According to Swinger, Council’s action on the final plat includes approving or disapproving the dedication of streets and public infrastructure and easements.

Swinger said the Village zoning office will ensure all permits are obtained, and that staff will facilitate DDC’s work through the Village’s new building department in the development of the subdivision’s infrastructure.

If Planning Commission or Council does not approve either type of plat — preliminary or final — then the applicant may petition the decision to Greene County Common Pleas Court within 60 days.

“The timeline could be as short as 60 days if Planning Commission approves the preliminary plat on April 12 and the final on May 10, followed by Council action on the final plat May 16,” Swinger said. “However, the Village cannot predict how long the applicant will take to submit a final plat.” 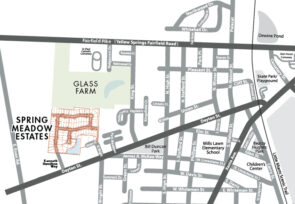 Days after the announcement of the proposed subdivision, a new local citizen action group called Resident Activism Yellow Springs, or RAYS, publicly came out against the plan.

RAYS was formed earlier this year to oppose the planned development at the south end of the village by Oberer Land Developers. According to the group’s website, RAYS is composed of business owners, young adults, parents, grandparents and public servants who “feel that there was minimal transparency by our Village government in the process of approving [the Oberer] development.”

Although the group describes itself as a political action committee, or PAC, it has not yet been listed in the Federal Election Commission’s PAC database.

According to a written statement sent to the News by RAYS trustee Lindsay Burke, the group opposes the proposed DDC subdivision on two grounds: a perceived noncompliance with the Village’s Comprehensive Land Use Plan, or CLUP, as well as DDC’s past dealings with the homebuilding company Ryan Homes.

“To be very clear, RAYS is not anti-development,” the statement read. “We recognize the need for growth and progressive change. We support community-centered development as articulated by our CLUP, instead of profit-driven development. ”

First adopted in 1967, and renewed most recently in 2020, the CLUP — as its provisions within the Village Code indicate — abides by several key principles including: make land use provisions and decisions that make possible the restoration, maintenance and retention of a population, employment and economic base that is capable of sustaining the community; make provisions for a range of housing opportunities, costs and choices; preserve open space, naturally occurring topographic features and vegetation, critical environmental areas and historic buildings and land uses.

Ultimately, according to Section 1240.02 of the code, “the Comprehensive Plan should be the guideline used by policy makers when making decisions on land use and zoning matters.”

“There are a number of key components in the CLUP [with which] this development complies,” Swinger wrote in a recent email. “One being that this new development will enhance the ‘economic well-being’ of the Village with the additional ratepayers to support the existing infrastructure, as well as the possibility of additional children in our school system.”

Additionally, Swinger said the 23-acre lot lies within the Village’s urban service boundary — a boundary just beyond Yellow Springs limits that could be served by Village utility extensions and a gravity-fed sewer. In other words, the boundary marks the outer limit to village development, and DDC’s proposed subdivision falls within it.

“The Village has anticipated [the land’s] development for a long time, adding it to the future land use plan map under R-B zoning,” Swinger said.

The CLUP future land use map, which can be viewed at bit.ly/36cvNtW, designates the 23-acre parcel that DDC intends to develop — as well as the adjacent Glass Farm property — as “suggested future land use” for medium-density residential.

Despite the 23 acres’ designation under the CLUP, Village Solicitor Breanne Parcels told Planning Commission members at their most recent meeting that, when evaluating applications, the commission is to rely on the dictums of the Village Zoning Code — treating the CLUP only as a “guiding principle.”

The CLUP, Parcels said, is a policy document and does not “have the force of law.”

“The comp plan itself is not codified. Your zoning code is,” Parcels said. “If [commissioners] are reading generalities from your comp plan into your zoning code — which is supposed to be very specific — it is a violation of a property owner’s due process rights.”

The News will continue to report on the proposed subdivision as more information becomes available. The next Planning Commission meeting will be held Tuesday, April 12.