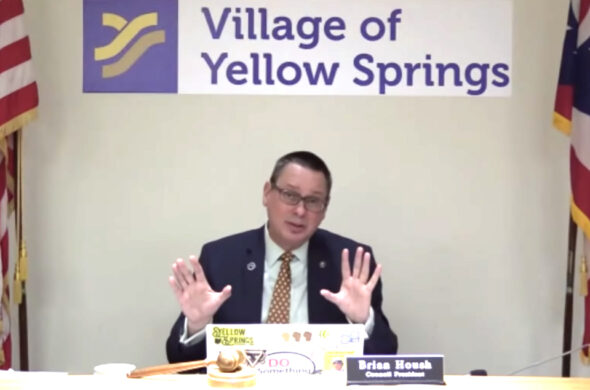 After receiving several grievances, Council discussed its policy for handling complaints about Council members from constituents at its Tuesday, Feb. 22, meeting, which was held virtually via Zoom.

The procedure discussion followed the receipt of several communications about Council President Brian Housh’s social media decorum, including comments made about students at Yellow Springs Schools. In a letter to Council, Heather Horton wrote that a discussion over Housh’s posts led to him discussing private matters in a way she deemed inappropriate.

The letter read in part: “My questioning of the councilman’s behavior on this post led to him utilizing a previous sensitive issue regarding he and my minor child in order to intimidate and silence my concerns. He mentioned my minor child by name. This is most harmful as my child and I are both private citizens and our situation regarding him is a private matter unrelated to the topic at hand. He used his public office and perceived power in an attempt to manipulate, intimidate, and shame me for confronting his unprofessional and inappropriate past and present behaviors.”

Complaints from Max Crome, Lindsay Burke, Sandy Bise, Allison Moody, Catherine Price and Kelly Carpe alleged that Housh’s social media comments were inappropriate and asked that he resign or be removed from Council.

Council Vice President Kevin Stokes began the conversation, saying that he wanted to make sure there was a process for handling the complaints. He also said that the nature of the complaints was complicated by the fact that Council members are both public officials and private citizens.

“We take all complaints seriously,” Stokes said. “I feel an obligation to begin this conversation because the complaints at hand were about Brian but one could argue that there is a demarcation between Council member Housh and person Housh.”

Council member Lisa Kreeger said that she empathized with the difficulty of maintaining sometimes conflicting identities, but that she was in favor of establishing expectations for Council members.

“I think we all need to be vigilant about our public and private identities. We are public people and are always to some extent representing our Council role,” Kreeger said. “I think that a policy about social media behavior is important.”

“The truth is the truth, but sometimes what is perceived as the truth is more important,” Council member Carmen Brown said. “I just want to be sure that when it comes to social media that there’s accountability there.”

Housh, who was quiet for most of the discussion, closed the discussion by saying he was open to clearer guidelines for “rules of engagement” on social media.

“If there’s one thing I feel bad about it’s making other people feel uncomfortable,” Housh said.
Council did not hear comments from citizens. It will hold an executive session prior to its Monday, March 7, meeting, “for the purpose of investigating complaints against a public official.”

Council heard updates from the Public Arts and Culture Commission and the Environmental Commission. Representatives from both commissions discussed the work they did in 2021 and presented goals for 2022.

Amy Wamsley of the Public Arts and Culture Commission said that one of their goals was to include public art that centered on environmental justice. She requested a budget of $5,000 for the commission to continue its work.

Catherine Zimmerman of the Environmental Commission highlighted the work of the group in collaboration with Piper Fernwey to complete the Village’s Climate Action and Sustainability Plan. Zimmerman requested a budget of $7,500, which would cover the cost of hiring an organizer for the community gardens.

Council members discussed the possibility of creating a new commission that merges the Justice System Collaborative Committee and the Human Relations Commission. Stokes, who proposed the new commission, said that the new commission would focus on social justice rather than policing, ensuring that commissions would not overlap in scope.

“I think we can work to ensure that work done by the social justice commission would not interfere with the work of the citizen review board,” he said.

In response to Stokes’ proposal, villager John Hempfling urged Council to retain a commission whose sole focus would be policing.

Council member Marianne MacQueen discussed the creation of an active transportation committee or commission, asking, first, whether it should be a committee or task force. According to Housh, the committee would provide “technical assistance” to Planning Commission and Council in regard to maintaining the walkability and bikeability of the village.

MacQueen suggested the committee be composed of villagers who have a vested interest in active transportation.

“People who are concerned with mobility, people who bike, hike and walk,” she said.

“The sooner we can get the group and technical expertise in place the better positioned we will be to move that $1.8 million and get more capital funds in the future,” he said.

Council member Kreeger opened the continued discussion about creating a Citizen Review Board, or CRB, for the village, saying that it is imperative that Council move forward by getting another legal review of the current CRB proposal.

“I’m really calling on you to agree that it will be done in the next four weeks,” Kreeger said. “The only remaining challenge is finding the right person to review this because we did not go in the right direction the last time.”

Other Council members agreed that it is time to move forward with the proposal.

“I would like to help with formalizing what questions need to be answered [by a legal review],” Housh said. “I feel like there’s three or four questions we really want answered.”

“If that’s the case, there could be two phone lines and two emails so there would be a clear line drawn between the two entities,” she said. “We also talked about working with the Dayton mediation group about how they worked with their CRB.”

Following the discussion of a combined coordinator position, Kreeger addressed issues with Council members’ overlapping roles on commissions and committees. MacQueen is the liaison to the Village Mediation program; Brown and Kreeger are working on the CRB proposal. Kreeger said if Council moves forward with creating a combined coordinator position for the CRB and the Village Mediation Program, one of the liaisons would need to step back to avoid violating Sunshine Laws.

“I think we need to streamline so we only have two people from Council assigned,” she said. “My proposal is that I step back and let Carmen and Marianne take the lead on the mediation and CRB proposal.”

Discussion then turned to the role of the CRB, mainly how it would maintain confidentiality and whether it would have subpoena power. Several villagers, such as Gyamfi Gymerah, asked questions and made clarifying comments.

“What I envision is the coordinator position working to sort and screen for the serious violations,” Gymerah said. “The CRB investigator is a person with subpoena power who does not work for Council or the Police Department.”

Council agreed to take action to move forward with creating a CRB.

“We have committed to this,” Housh said. “We are going to get our action steps, budget some money and move this thing forward.”