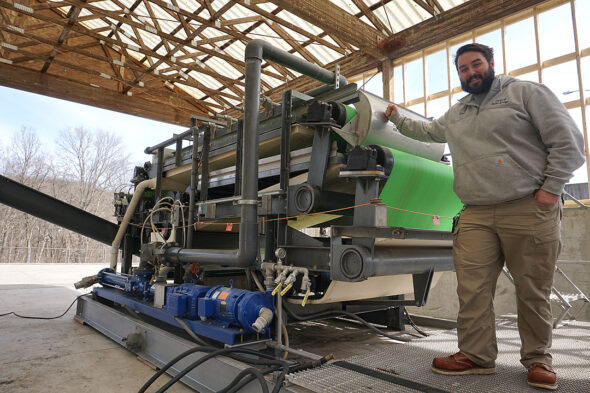 Village Superintendent of Water and Wastewater Brad Ault showed off his department’s recently purchased sludge press earlier this month. The press, which separates residual water from biosolids that have flowed through the municipal plant, was purchased in February for $156,000 following Village Council approval. (Photo by Reilly Dixon)

The Village of Yellow Springs is now the proud owner of a nine-ton, seven-foot-tall sludge press.

Its purpose? Simply put, to squeeze out any remaining water from the biosolids that run through our municipal water and wastewater treatment plant. For the past year, the Village has only rented this technology.

Renting the press over the course of 2021 cost the Village over $82,000, with half of that money slated for the purchase of the press.

At the meeting, Salmerón explained that purchasing the press, instead of continuing to rent it, had several benefits. Chief among those: a return on investment. Salmerón said owning the press and being in full control of the produced sludge will save the Village over $21,500 per year.

“We’re ensuring that we are dealing with biosolids in a responsible and economic way,” Salmerón said. “With the money we put into the press, we’ll make it back in seven to eight years. And with good care, the machine can [work for] over 20 years.”

Brad Ault, the Village superintendent of water and wastewater treatment, and his three-person crew began testing the sludge press in November 2020, when the Village first entered into the rent-to-own contract with Eaton-based MSD Environmental Services.

“We were hopeful,” Ault told the News in a recent interview.

“We wanted to see how it’d work for us before we went and asked [the Village] for the money to buy it,” Ault said. “And, well, it worked beautifully.”

“When we saw how efficient and operator-friendly the press was, we knew it was our best option,” Ault said.

Sitting under a pavilion in the northeastern quadrant of the Village’s water and wastewater treatment plant on Grinnell Road, the sludge press is one of the last stops for the millions of gallons of wastewater that flow through the facility each month.

In February of this year alone, the Village plant received and processed over 33 million gallons of wastewater.

With enormous pressure, the press squeezes moisture out of the biosolids, creating what Ault described as a “fluffy, cake-like” material, which is funneled into a dumpster. The excess water is then cycled back through the plant.

Ault explained that the press also helps the plant to keep its waste volume down, and therefore, avoid regulatory violations of the National Pollutant Discharge Elimination System permit issued to the Village plant by the Environmental Protection Agency.

What of the biosolid cakes, and where do they go?

As Salmerón explained at the Village Council meeting, ownership of the press provided the Village with several disposal options.

He said the Village could outsource the removal of biosolids, deliver them to the Rumpke landfill in Brown County, with whom the Village has an existing energy contract, or apply it locally on area farmland.

“We have the permits to apply our biosolids on our farmlands,” Salmerón said. “But we thought that might be hit-or-miss in popularity with our neighbors.”

Ultimately, Salmerón, Ault and the wastewater team went with the Rumpke option and began sending the Village’s biosolids to the landfill’s gas-to-energy facility in the spring of 2020.

As Salmerón detailed, the Village’s biosolids disposal generates biogases and electricity that are fed into the electrical grid from which the Village draws.

According to Village Public Works Director Johnie Burns, the electricity Rumpke generates provides Yellow Springs with 10.6% of its total energy.

The decision to rent-to-purchase the sludge press came on the heels of divestment from Renergy, Inc., a commercial business from Delaware, Ohio, that turns municipal biodegradable waste into renewable energy.

Beginning in 2015, Yellow Springs sent much of its wastewater sludge to a biodigester on Herr Road in Fairborn, just four miles west of Yellow Springs.

Located on a family farm owned by Tom Pitstick, who leased a part of his land to Renergy subsidiary Dovetail Energy, the biodigester provided Pitstick with fertilizer for his farm — fertilizer made from manure from Pitstick’s hog operation, area food waste and Village sludge.

Then, in March 2020, Dovetail received a cease-and-desist order from the Bath Township zoning board. The board’s decision was couched in a breach of township zoning code, which prohibits industrial uses on agriculturally zoned land.

Additionally, a number of neighbors had previously raised concerns about foul odors, heavy truck traffic and possible groundwater contamination from the facility’s storage pond and the sludge in the farm’s fertilizer.

The Village fully separated from Renergy in September 2020, and at the time, Salmerón said Yellow Springs’ future in dealing with its biosolids seemed uncertain.

“When we pulled out, we weren’t sure what the financial impacts were going to be,” he said. “We found ourselves in a little bit of a pile.”