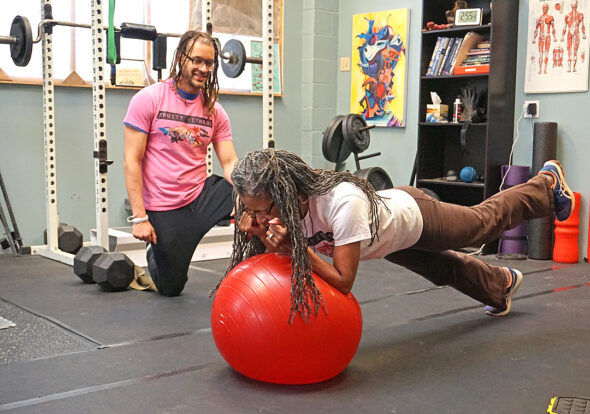 It’s an impressive group of muscles, the posterior chain.

Running from the back of the head down to the heels, the chain encompasses a number of muscles critical to everyday movement: hamstrings, rotator cuffs, erector spinae, glutes, calves, lats, delts, traps and everything in-between.

According to longtime villager and personal trainer Kyle Truitt, the posterior chain “does it all.” Whether you’re laying up a basketball or simply getting out of your chair, you’re engaging some part, if not the entirety, of your posterior chain.

“Function and physical well-being,” Truitt said just moments before deadlifting a 425-pound trap bar. “For real, man, that’s what the posterior chain is all about: just helping people do what they want to do.”

Owner and operator of the aptly named Posterior Chain, LLC, Truitt recently moved his personal training operation into a new space: a multi-room suite in a former Bushworks building on Cliff Street. Truitt said the new space is a step toward helping him grow his small business, which already boasts nearly two dozen regular clients.

“It’s definitely a great spot for what I have going on,” Truitt said. “It’s really good, with the potential to be great down the road.”

Previously, Truitt ran Posterior Chain out of a much smaller space in the former Yellow Springs Lumber Company building just down the road. At the beginning of 2022, Truitt vacated his single-room rental in the lumber building to make space for the construction of a new indoor public market.

Just like his old location, Truitt’s new gym is still bursting at the seams with equipment — only now, there’s more of it. Ropes, rings, mats, weights and machines of all kinds fill the space. In one corner, a couple of punching bags sway from the rafters. Racks of dumbbells, colorful kettlebells and medicine balls line the walls.

One of the most striking features of Truitt’s gym, however, isn’t the quantity of iron or even the variety of exercise stations. It’s the dozens of abstract paintings that adorn the space: polychromatic works of art that were made by Truitt’s late father and previous Posterior Chain owner, Buck Truitt.

So, while running the gym has always been a beloved personal endeavor for Truitt, it goes a little deeper.

Just as the anatomical posterior chain links muscle groups up and down the back, the gym itself links Truitt to a familial legacy.

Buck Truitt was well known around Yellow Springs as an avid painter, lifelong athlete and certified personal trainer. He first opened the doors to the Posterior Chain in June 2007 — a move the younger Truitt described as a way to fill a local fitness hole Buck Truitt saw in Yellow Springs.

According to Kyle Truitt, this was during a time when the fate of Antioch’s Curl Gymnasium — later the site of the Wellness Center — was uncertain.

“While [my dad] partially just wanted his own space for lifting and training, he saw a clear need for a space dedicated to helping others reach their fitness goals,” Truitt said.

“He loved exercising so much that he left his job doing construction to make a career out of it,” Truitt said. “And when you think about it, he just started doing a different kind of construction.”

Over the course of Buck Truitt’s tenure as the head of the Posterior Chain, he developed a loyal clientele — a number of whom were athletes looking to improve their game, but a majority of whom were people who simply wanted to live better, Kyle Truitt said. 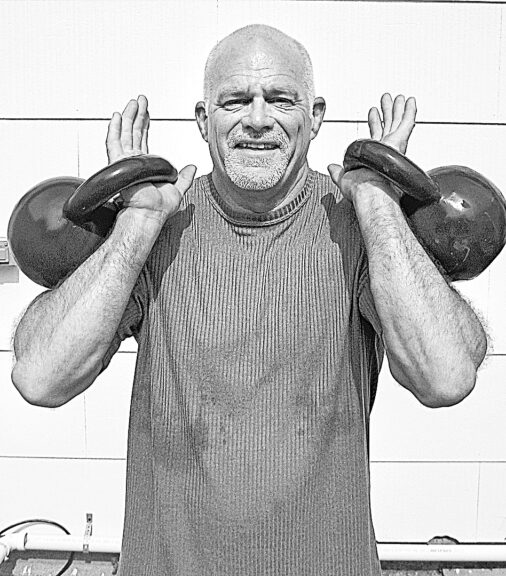 Noting a need in Yellow Springs for a personal training gym, Buck Truitt opened the Posterior Chain in 2007. When Truitt died in summer 2018, ownership of the gym was transferred to his son, Kyle Truitt. Utilizing the same strength-based approach as his father, Kyle Truitt has carried on the legacy Buck Truitt began. (YS News Archives)

“He had a real reputation for helping people reach their potential,” Truitt said. “I’ve never talked to anybody who trained with him who didn’t have great things to say about their physical shape, endurance and strength as a result of working with him.”

According to Truitt, his father was always on the cutting edge of best conditioning and fitness practices. Relying on leading methodologies and research in the fitness world, Buck Truitt would create individualized strength-based regimens for his clients. By focusing on the strength of a client’s posterior chain, and encouraging good nutrition and discipline outside of the gym, Buck Truitt would inevitably help his clients “live better and feel better,” his son said.

“I still have all of his notes, folders and binders he kept,” Truitt said. “He really was just so knowledgeable. He was ahead of his time with his approach to strength training and athletic development.”

But when Buck Truitt’s pancreatic cancer began to take a turn for the worse in 2018, the younger Truitt began taking over operations at Posterior Chain.

Truitt said his father stopped seeing his clients just a month before his death in August of that year. When he died, his paintings were on exhibition at the Yellow Springs Brewery, and just a year before, on his 70th birthday, Buck Truitt was still deadlifting 455 pounds.

By September 2018, a month after Buck Truitt’s passing, Posterior Chain — the remaining clients, the space in the Lumber Company building, the weights, all of it — was Kyle Truitt’s.

“I’m still learning about his life and hearing stories I never heard before,” Truitt said. “He got so much joy from not only improving his own health tremendously, but watching other people improve their health from working with him.”

Truitt added: “He didn’t say it much when he was around, but I know he’d be proud of me — carrying on his legacy.”

As the son of Buck Truitt and Valerie Blackwell-Truitt, a locally celebrated dancer and performer, Kyle Truitt was destined to lead an active life.

Suffice it to say, Truitt comes by his passion for fitness honestly. Truitt has played sports throughout his life — often with his father coaching him — and he’s always had consistent access to a gym.

“I recognize my fortune with that,” he said. “I’ve just kept at it because training is what I feel I’m meant to do. It’s what we’re all meant for.”

Truitt is a 2005 graduate of Yellow Springs Schools and a 2010 graduate of Ohio University, with a degree in art and a specialization in African American studies. After returning to Yellow Springs from college, Truitt spent several years working at various restaurants in the village, but it wasn’t long before his passion for fitness came to the fore, and he decided to make a go of turning it into a career.

In 2014, Truitt earned his personal training certification from the International Sports Sciences Association. Around that time, he began splitting his time between seeing clients at his dad’s gym and at the newly opened Antioch Wellness Center. Then, in 2016, he got a full-time job at the Dayton-based training center Personally Fit.

“[Personally Fit] was such a great experience for me professionally,” he said. “There I learned new training techniques and how to work with different age groups. It was good to get a feel for how to help various populations move.”

Truitt said his three-year stint with Personally Fit was like “being kicked out of a plane without a parachute.” Never before had he led group classes or worked with so many senior clients, and according to him, he developed a significant passion for that approach to personal training.

He continued leading group circuit training courses at the Wellness Center until the gym was shuttered in March 2020 from the COVID-19 pandemic.

When Truitt left Personally Fit to focus entirely on building back the business base of Posterior Chain toward the end of 2018, he had a lot to draw from. He had decades of wisdom imparted from his father, and now, real-world experiential knowledge — all of which confirmed for Truitt the value of a strength-based approach to achieving optimal fitness and health.

“As we age, our cartilage and ligaments will naturally deteriorate,” Truitt said. “But the more you can strength-train your muscles, getting them used to doing stuff, that’ll help your cartilage, help your tissue, your blood pressure, your bones — everything.”

Truitt talked about one of his clients, Darryl Mabra, a local resident who was 69 years old when he came under Truitt’s tutelage. Previously, Mabra trained with Buck Truitt.

When Kyle Truitt first began working with Mabra several years ago, Mabra had difficulties regulating his breathing and was reliant on an inhaler.

“Over time, though, I’ve gotten him to be more mindful of his breathing, and I’ve reinforced breathing techniques while we’re lifting and in between exercises,” Truitt said.

“He said he was worried about his breath, and he didn’t want to struggle,” Truitt said. “So, he saw me for six or seven months before. And when he got back from his trip, he was ecstatic. He said, ‘Man, I did whatever I wanted.’”

Beyond helping his diverse cast of clients reach whatever fitness goals they have, running Posterior Chain has afforded Truitt a number of personal benefits. For one, he feels empowered by being one of the only Black-owned businesses in Yellow Springs.

“I know young Black males statistically don’t own businesses that frequently — anywhere, but especially in rural Ohio,” he said. “I count my blessings and I’m thankful that I’m healthy enough to be able to do this kind of work in Yellow Springs, and especially that I’m good enough at it to keep people coming back.”

Additionally, running Posterior Chain has allowed Truitt to stay in touch with his mother, Valerie Blackwell-Truitt — one of his more frequent clients.

“I had a big knee surgery in August 2020,” Blackwell-Truitt said. “With Kyle’s help, my knee got so much stronger and my recovery time was a lot shorter than it could have been. So I feel like it’s been really beneficial having him here.”

She added: “I also just love spending time with him. Exercising here is just one more moment I can be with my son.”

With a wink, Blackwell-Truitt said her son gives her a family discount for her personal training.

Big things are still on the horizon for Truitt and Posterior Chain. Truitt said despite his busy schedule, he’s still taking clients. He also said he has imminent plans to revive his group training sessions — specifically his weekly fitness “bootcamps” he hosts each spring and summer at Gaunt Park. Truitt hopes to eventually bring on additional trainers and even yoga instructors at the Posterior Chain.

“I’m just trying to carry on my dad’s legacy and stay healthy while I’m at it,” Truitt said. “I say it all the time: this will literally save your life — it’ll help you live longer and live better. Strength training and exercise, it’s what we’re meant for.”