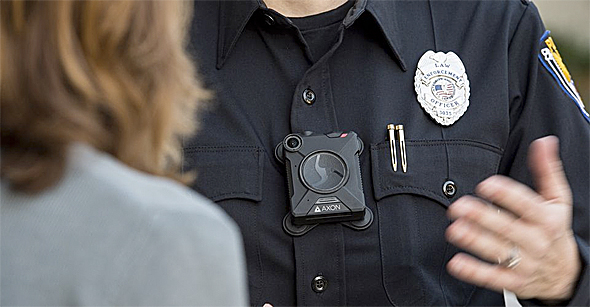 At its regular meeting held virtually on Monday, March 21, Village Council reviewed an ordinance that would establish a body worn camera policy for the Yellow Springs Police Department. (Photo courtesy of Axon)

Accountability while protecting the privacy of individuals — that’s the goal of the body worn camera policy a group of villagers presented to Village Council at its virtual meeting on Monday, March 21.

The body worn camera policy was presented for a first reading by Village Manager Josué Salmerón, who worked with villagers John Hempfling, Bomani Moyenda, Joan Chappelle and Ellis Jacobs, along with Police Chief Paige Burge and community outreach specialist Florence Randolph. The group was assembled by Village Council in response to a call to follow its procedural dictums — that a body worn camera policy would be in place prior to the Village purchasing or seeking grant money for body worn cameras.

The group met six times to discuss logistics and best practices from other communities, to model policies from organizations like the American Civil Liberties Union, and to hear Village Solicitor Breanne Parcel’s legal review of the group’s proposal.

“We gathered what we thought were the best policies and we used them to come up with something that will move Yellow Springs to the forefront of how this technology is used,” Jacobs said.

Jacobs and Burge commented on the process, saying it was a good way to hear from several perspectives.

“This is a perfect example of citizens and police coming together to meet a common goal,” Burge said.

Following the description of the process, Jacobs discussed some specific elements of the policy, focusing on pieces that would be unique to Yellow Springs.

“These are the things that don’t show up in every policy that you see around the country,” Jacobs said.

• As soon as they are able to, officers must notify individuals that the interaction is being recorded.

• Officers are mandated to turn on their cameras in “all investigatory contexts.”

• All officers’ cameras are to be used in “buffer mode,” a setting that captures video and audio 60 seconds before an officer’s camera is turned on.

• A citizen can ask an officer to cease recording for privacy purposes. The request must be captured on the recording, and the officer can use discretion in their decision to grant the request.

According to Jacobs, any footage from body cameras will be immediately available to citizens; however, officers will not be able to see footage prior to giving written testimony of an interaction with a citizen. In addition, footage of incidents where force is used against a private citizen must be released within five days.

Council praised the group for its work, saying that Council members appreciated the time group members spent in developing the policy. Council member Carmen Brown said that she was especially pleased with the option for a citizen to ask that an officer stop recording.

“One of the things that stood out to me was that feature where a community member has agency over what happens next because they can say, ‘Turn the camera off,’” she said. “That’s kind of a big deal and I appreciate the work that everyone’s done to make it a part of the policy.”

In other Council business, March 21:

“We want to officially acknowledge that we are private citizens at some points,” Stokes said. “We as councilpersons need to be more diligent in assuring that our messages are clear.”

The proposed rules say that Council members should acknowledge when they are speaking as a private citizen, both on their personal pages and online forums.

“We need to be aware of the hazards,” Stokes said.

“Council does have the right to govern itself,” Stokes said. “This acknowledges that there is no process.”

Council member Lisa Kreeger asked that the policy include a procedure for handling complaints against Council members from Village staff.

Council also added a hearing to a future agenda in regards to communication from former Council member Laura Curliss, who has asked Council to rescind the resolution censuring her for her conduct. Kreeger said she believed the resolution should be rescinded due to a lack of process.

“Had we had a policy about complaints, this resolution would have been handled differently,” Kreeger said. “I think it shouldn’t be necessary to keep [the censure resolution] on our books.”
Kreeger, Stokes and Brown voted to bring the discussion to the table, while Housh and MacQueen voted against discussing the matter.

In-person meetings
Council members discussed returning to Council chambers for meetings, citing low COVID-19 numbers and community spread. Council member Lisa Kreeger said that she would like for face masks to be optional.

While all members of Council are in favor of returning to in-person meetings, their opinions differ on whether the public should be able to participate remotely. Parcels said that Council members could continue attending remotely as long as the move isn’t challenged in court, but it would be up to Council to create rules for the public.

Salmerón said that should the meetings return to in-person, the format for recording and broadcasting the meetings would change, and that staff was not in favor of hybrid meetings.

Brown said she is in favor of hybrid meetings, citing accessibility issues.

In response to a question about going back to pre-COVID protocols for Council, Brown said that Council has the ability to make meetings more accessible, so it should continue to accommodate people of differing abilities through hybrid meetings.

“We’ve advanced,” she said. “I think it’s right to have accessible meetings to everyone who wants to participate.”

In a follow-up interview, Housh said that the first in-person meeting would be the second meeting in April due to a scheduling conflict with Salmerón.

Brown said she spoke with Sarah Wallis, who agreed that the Village Mediation Program would continue its attempt to find a program leader who would also serve as an “intake” person for the CRB.

Brown and Kreeger also discussed a conversation with Chief Burge where they considered the need of two surveys: a community perception survey and an interaction survey. These surveys would allow Village officials to gather data on interactions with officers and, at the suggestion of Kreeger, other Village staff.

Legislation
• Council heard and passed an emergency reading of an ordinance that would amend the Village’s personnel policy manual and create a position for an accounting and payroll manager. Salmerón said that the position would fill a gap created by the resignation of NathaLee Hutchins, who served as the utility billing clerk and payroll clerk.

• Council unanimously passed a resolution approving a subdivision of the CBE property. The subdivision will allow Cresco to expand its facilities.

• Council voted 5–0 to pass a resolution to settle with the Ohio Civil Rights Commission following a complaint and investigation regarding former Village employee Jason Hamby, who had filed harassment complaints against former Village Manager Patti Bates.

• Council approved a second reading of an ordinance that would allow the Ohio Department of Transportation to service state highways within the village limits. This service includes ice and snow removal, repair of state highways, and maintenance of signage and markings on pavement.

Council’s next meeting will be held virtually on Monday, April 4.