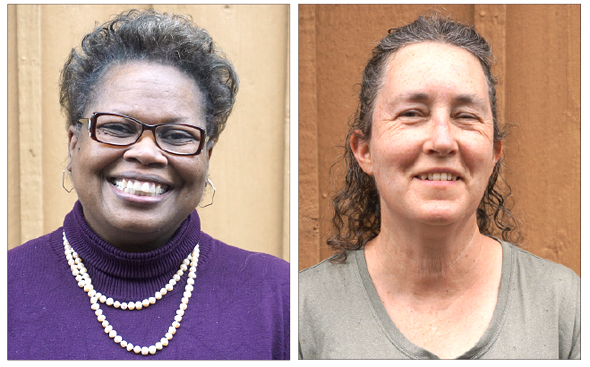 Incumbent Democratic precinct captain Shonda Sneed, left, is seeking a third term, and is concerned about current efforts at voter suppression. Newcomer Lindie Keaton says her role as a precinct captain would be that of a facilitator. (Photos by Matt Minde)

They promote voter registration, work to encourage early voting and support election-day processes. Captains provide important information to their precincts about candidates running for office and hot-button issues that may affect voters’ lives.

In the upcoming primary on Tuesday, May 3, Democratic voters living in the 440th precinct, which includes most of the village north of Dayton Street, will vote for precinct captain.

Yellow Springs traditionally votes for Democratic candidates, while most of the other communities in Greene County lean Republican. Two Yellow Springs residents are vying for the position: Incumbent Shonda Sneed is running against challenger Lindie Keaton.

Both candidates were recently interviewed by the News.

Precinct Captain Shonda Sneed is a 1984 graduate of Yellow Springs High School and has lived in the village for over 50 years. Having served as a precinct captain for eight years, Sneed is running for a third term. Sneed, a distribution designer of power poles with an engineering background, said her second love — politics — was instilled in her at an early age by her parents, who were active in the voting rights movement of the 1950s and ’60s.

“They taught me if you don’t know your past, your past is doomed to repeat itself, and that’s something that has always been engraved in me,” she said.

Sneed is concerned about what are widely perceived as concerted efforts by Republican officials to roll back voting rights, and saw early rumblings of suppression efforts back in 2010. She began volunteering with organizations that advocated for voter rights.

“Now we are fighting people being taken off the [voter] roles, fighting [Republicans] changing polling locations and fighting the reduction of early voting options,” she said, adding that she “warned people in 2020 about voter restriction shenanigans.”

Sneed said she doesn’t limit her work to just residents in her precinct, and at the height of the COVID-19 epidemic during the summer of 2020, spoke at several Yellow Springs Speaking Up for Justice rallies about the threats to voter rights, and to encourage early voting. She also made herself available to assist people in getting to their polling locations.

“I advised against mailing ballots and offered to drive people to the polling places to drop them off,” she said.

Another passion for Sneed is healthcare, having lost a brother to colon cancer in 2004. Her brother’s illness and the family’s struggles to get adequate support for her brother led Sneed to healthcare advocacy.

“I was very close to my brother, so I wanted to do something,” she said.

According to Sneed, precinct captains provide an important community service by educating the public on their rights as voters.

Many of Sneed’s efforts helped get state Supreme Court judges elected — something she is proud of, because “there are no ‘Ds’ or ‘Rs’ by their names on the ballots,” she said.

She named a litany of issues that, if elected, she’d like to educate voters about, including women’s reproductive rights and living wages.

“There are people in our community that have issues with housing affordability. The people we put in office — their decisions affect us,” she said. “I want to run on my record — a lot of people know me as the person who is out there registering people to vote, and that I care about their issues. Even if you are not in my precinct, I will sit with you and talk to you about issues.”

Keaton’s bid for precinct captain is her first run for office in Greene County. Keaton, who is 54, grew up just down the road in Springfield, but came to Yellow Springs for doctor’s visits while growing up.

An educator who taught in the Springfield City Schools for the first decade of her career, Keaton said she left teaching for a while when her son was born and moved to Yellow Springs in 1999.

“Yellow Springs just seemed like a good place to be a single mom,” she said.

Keaton patched together a series of jobs, including becoming a VISTA volunteer. She worked with Yellow Springs Home, Inc., and eventually purchased the first home built by the organization. She returned to teaching, and is now in her 16th year as a kindergarten teacher with the Antioch School.

Keaton said she added running for office to her list of things she could do to change the world when Donald Trump was elected president in 2016, and became more aware of how politics worked and started getting more active.

“My big concern is we have one party rule in our state as well as in our county, and I think that breeds corruption and unresponsiveness to true community needs,” she said. “We’ve seen it in HB 616, and things have gotten worse since 2016. We need a really strong Democratic Party, and we need more people to get involved. I would even say that in the last two months there’s been an even more dangerous turn in extremism.”

HB 616, dubbed the “Don’t Say Gay” bill, is making the rounds in the Ohio State Legislature, and would make it unlawful for teachers to use curriculum with roots in “subject matter based on sexual orientation or gender identity that is not age appropriate.”

Keaton believes building a stronger Democratic Party in Ohio starts from the ground up.

“Greene County isn’t a specific anomaly in Ohio, but you have to do it at the neighborhood level,” she said.

Keaton has canvassed for redistricting and criminal justice reform in her neighborhood and other communities. She was also a block contact for her neighborhood during the early stages of the COVID-19 pandemic. She volunteered with the phone campaign to recruit voters for the Georgia senate campaigns of Jon Ossoff and Raphael Warnock in 2020.

Keaton is an advocate for a campaign process known as deep canvassing and said that it involves more than just handing people a slate and encouraging them to vote.

“It’s not just precinct captains giving information to voters, but also getting information from voters, and even other people in your neighborhood,” she said.

Keaton said she enjoys talking to people and would see her role as a precinct captain as that of a facilitator, which is also her approach to teaching. She said the process requires deeper relationship building, “asking about people’s living experiences, asking what people’s needs are, because sometimes leadership is very disconnected from people’s lives.”

Keaton said she would also work collaboratively with other precinct captains, adding that there are several open precinct seats in other areas.

“Yellow Springs is pretty strong, we can count on the village for Democratic votes, but working across the county would be the other piece,” she said.

According to Keaton, she would bring a fresh perspective to the office. “I have not been deeply involved in the Democratic State Central Committee, so I think I am a newer voice,” Keaton said.

Keaton said there are three contested precinct captain elections in the county, which is unprecedented.

“I am excited that there’s still this energy, and I think it’s a really good sign for the county,” she said. “It’s my understanding that we won’t lose those people, we’re all on the same side, so we will just end up with that many more precincts covered. I am pretty optimistic and excited that I am not the only one feeling this call to step forward.”