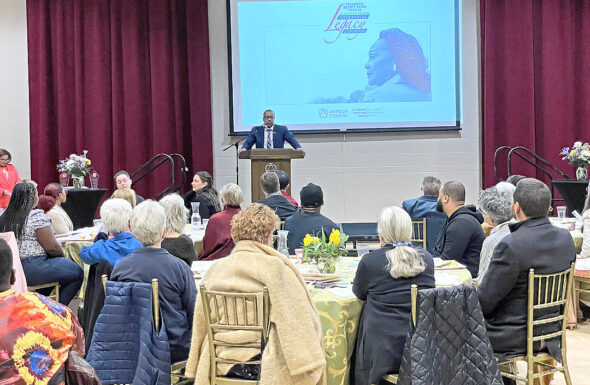 Community organizing, healing and relationships were among the themes highlighted during the sixth annual Legacy Luncheon ceremony presented by the Coretta Scott King Center on Friday, April 29, at the Wellness Center on the Antioch College campus.

“There are things happening that require us to be in community,” the Coretta Scott King Center’s executive director, Shadia Alvarez, told the event’s 100-plus guests in honoring three area individuals selected for 2022 awards.

Yellow Springs High School graduate Julian Roberts, an alum of The Ohio State University currently completing nursing training at the University of Cincinnati, received the 2022 Trailblazer Award for her efforts in co-organizing and leading 25 weeks of Speaking Up for Justice marches and rallies in Yellow Springs through the summer of 2020 after the police killing of George Floyd.

“I, like many of the other members of the community, felt the need to do something,” Roberts said in accepting her award. Even small acts can have large outcomes, she said.

“Making change on a small scale can get attention. Small voices can become a consistently large crowd,” she said.

Dion Green, of Dayton, one of two 2022 Legacy Award recipients, followed the horror of his father’s death during the August 2019 mass shooting in Dayton’s Oregon District by founding Flourishing Under Distress Given Encouragement (FUDGE), a nonprofit organization that helps survivors through traumatic experiences with resources and support.

“I wish I wasn’t up here,” he said tearfully while accepting his award. Green said that after the death of his father and the other shooting victims, which followed barely two months after the loss of his home in the May 2019 tornadoes, he was angry.

Green said he’s come to see that “we all have a form of trauma,” and his goal is to “honor [the losses] with action.”

“Don’t talk about it. Be about it,” he told the gathering.

The second 2022 Legacy Award recipient, Adriane Miller, of Yellow Springs, is executive director of the National Conference for Community and Justice of Greater Dayton, or NCCJ.

Miller said her organization is “dedicated to eliminating bias, bigotry and all forms of discrimination.” She said their primary method in pursuing that mission is through relationship building.

“When we take the time to get to know people, that’s when change happens,” Miller said. “There are good people out there,” she continued, urging the luncheon attendees to seek out and get to know others from all areas of the community.

The annual Legacy Luncheon commemorates King, a civil rights leader and widow of Dr. Martin Luther King Jr. An alumna of Antioch College, she died Jan. 30, 2006, and would have turned 95 on her most recent birthday April 27.