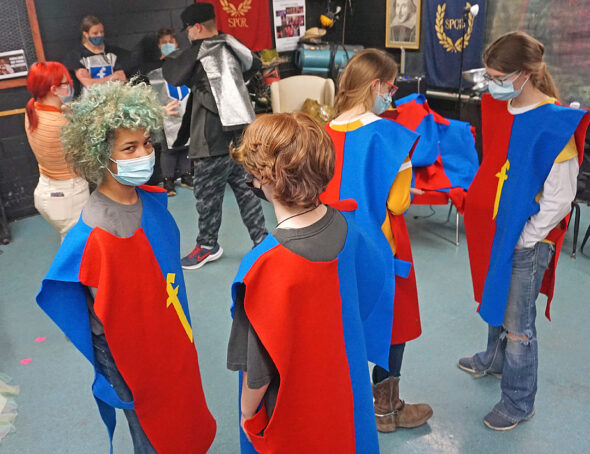 McKinney Middle School and YSHS students suit up in Duloc tunics at a recent rehearsal for “Shrek: The Musical,” which will be performed May 6–8 at Central State University. front, left to right: Jaden Douglass, Quinn Murray, Hannah Finney and Lauren Finney. back, left to right: Rosemary Burmester, Ben McKee, Adrian Coe and Brian Halpin. (Photo by Lauren "Chuck" Shows)

‘Shrek: The Musical’ to debut

To paraphrase the titular ogre in “Shrek: The Musical”: A stage musical is like an onion — it has layers. Text, music, choreography, staging, costumes — they all have to be pulled apart and tackled separately.

Eventually — unlike an onion — they do come back together, and when they do, it’s a magical metamorphosis, like turning hay into gold, a frog into a prince, or an ogre into a hero.

This week, the young thespians of YS High School and McKinney Middle School were in the last galvanic days before that transformation as they prepared to perform “Shrek: The Musical.” The production will be staged Friday–Sunday, May 6–8, in the Paul Robeson Cultural and Performing Arts Center at Central State University.

The musical is based on the 2001 film “Shrek,” itself based on the 1990 book of the same name. “Shrek: The Musical” aims to upend the traditional fairy tale via its main characters’ struggles with personal desire and self-image. The show also works hard to eschew common tropes by coating its fantasy world in a hard shell of humor.

The cast and crew of “Shrek,” which comprises nearly 40 students, were scattered around YS High School during a recent rehearsal, having dissected the show into its component parts. In the cafeteria, theater teacher Lorrie Sparrow-Knapp reminded students that they had only a few days before they would need to stitch everything back together again.

“On Friday, we run the whole show, off-book — no calling for lines,” she said.

Upon Sparrow-Knapp’s exit from the room, stage manager and senior Kinu Shope entreated the group of actors waiting in the wings — that is, at the lunch tables — to quiet down as director Ed Knapp went through a scene with some of the cast’s principals.

“One of my main jobs as stage manager is organizing the children,” Shope said, laughing.
The last show in which she participated, the much smaller-scale “Talking With…” in the fall, featured a cast of juniors and seniors, but “Shrek” includes seventh- through 12th-graders.

“It was a much different vibe,” she said, noting the age-old divide between younger and older students, but added that the cast was “coming together” in the days leading up to the show’s premiere.

“It’s a little frazzled, but we’re getting there,” she said.

Meanwhile, the scene Knapp was rehearsing nearby was a complicated one, in which Shrek (Otto Cipollini) and Donkey (Kyle Johnston) are on the run from Dragon. Though Dragon is voiced and acted by freshman Gini Meekin, her body and tail, which will be represented by a large, puppet-like costume, is controlled by eight other students. The actors worked through the scene, running back and forth, aiming to visualize how Dragon will move on stage. 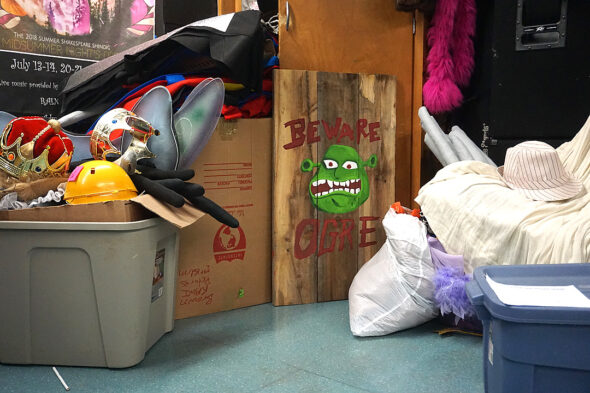 “But we’re really just sketching this out,” Knapp reminded the actors. “Once we get onto the stage [at the Robeson Center], it’s all going to change to fit the space.”

Dragon is Meekin’s first principal role in a McKinney/YSHS production. She previously acted in Mills Lawn’s last musical, “The Lion King,” in 2018, and the all-school musical “Scrooge,” in December 2019. “Shrek” is the first musical any of the village’s public schools have produced since the inception of the pandemic.

“I’m nervous!” Meekin said. “I’ve been to the [Robeson Theater for ‘Lion King’] and sung with other people, but now I have to sing with myself. It’s challenging to adjust, but I think everything will get so much better when we get to the Robeson.”

Down the hall in the theater classroom, costume director Rosemary Burmester flitted around the room, pulling garments out of boxes and handing them out.

“That might work,” she said, holding a tattered dress up to one actor to gauge its size. “This is supposed to be for an ogre, so it’s OK that it’s ratty — I might add a patch here.”

Burmester, who also plays a few smaller roles in the show, said she was not its original costumer; another student assigned to the role left early in the production, so she volunteered.

“Since I wasn’t originally doing costumes, a lot of what we have right now is not my vision, so we have to go out to the bus barn [where stock costumes are stored], because a lot of what was pulled doesn’t work,” she said.

Echoing fellow crew member Shope — and the general mantra of the entire production — Burmester added: “But we’re gonna get there!”

Burmester said the new role was one of several that shifted during production, which has caused some added stress as opening night looms near. But one thing she doesn’t have to worry about, she said, is costuming the regiment and heralds of Duloc, the fairy tale kingdom ruled by Lord Farquaad (Miles Gilchrist), the show’s villain. Those costumes were made from scratch by volunteer parents.

The occasional sound of singing wafted from the music room at the other end of the school.

There, Sparrow-Knapp, who is acting as music director, worked with three of the show’s four versions of its heroine, Princess Fiona — child (Maddison Allen), teen (Ashton Egea-Kaleda) and adult (Daphne Trillana). The Fionas rehearsed “I Know It’s Today,” a funny and moving song that follows the character, waiting for her “prince” to come, through different points in her life.

“I can hear her heart cracking over there, listening to you guys,” Sparrow-Knapp said, indicating this reporter. “Are you crying yet?” (This reporter was not, but was pretty close.) 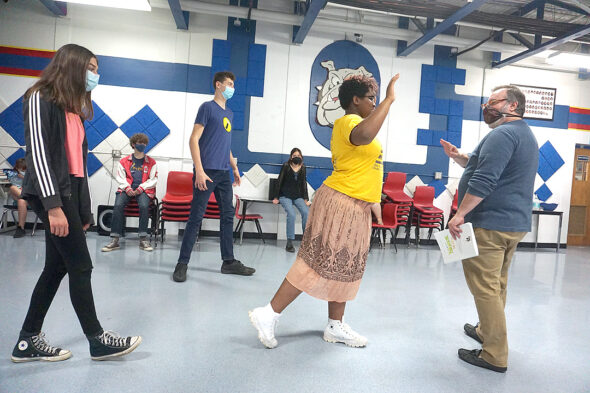 Trillana splits the principal role of the grown-up Fiona, who — spoiler alert — transforms into an ogre at night, with Milo Strolger. Trillana plays Fiona in her human form, and Strolger plays Fiona as an ogre. Trillana said that dual-casting the role is common for high school productions of the show, as swapping out costumes and makeup between scenes would be difficult for one actor.

“And we wanted Ogre Fiona to be able to sing some of the songs, too,” Trillana said. “Plus it means I get a break!”

Strolger said playing Ogre Fiona — which he called the character’s “true form” — has been an uplifting experience.

“All of [Ogre Fiona’s] songs are about being beautiful no matter what you look like — being encouraging and not self-deprecating,” he said.

Director Knapp echoed Strolger’s comments, saying this message is what “Shrek: The Musical” is all about.

“The show’s characters all learn not to judge based on appearances,” Knapp said. “Really, it’s all about diversity — that it’s good to be different, and it’s OK to be weird.”

“Shrek: The Musical” will be performed Friday and Saturday, May 6 and 7, at 7:30 p.m., and Sunday, May 8, at 2 p.m., in the Paul Robeson Cultural and Performing Arts Center at Central State University. Tickets are $15 for adults, $10 for seniors and $5 for students, and may be purchased online at bit.ly/3rROaLY.