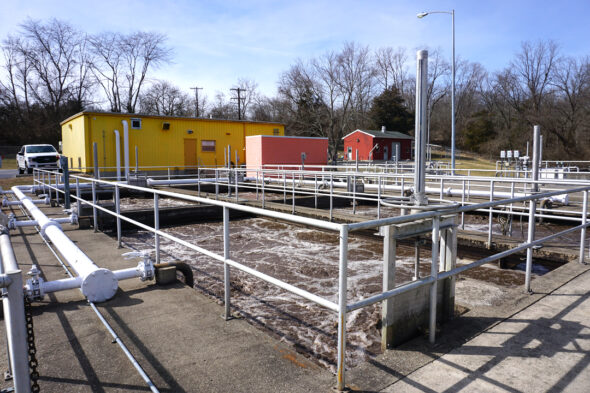 On Saturday, May 28, a mechanical failure at the Village’s municipal water and wastewater treatment plant led to nearly 750 gallons of sludge spilling out of the facility. (News archive photo by Reilly Dixon)

On Saturday, May 28, around 6 p.m., a mechanical failure at the Village’s municipal water and wastewater treatment plant led to nearly 750 gallons of sludge spilling out of the facility.

According to the facility’s superintendent Brad Ault, the spill was the result of a sump pump hose disconnecting from a sludge digester. The hose is only one inch in diameter.

Ault said of the 750 gallons that flowed out of the facility, the majority of it was captured by an on-site drain. However, when the drain became clogged, an estimated 100 gallons flowed down the facility’s driveway, onto Grinnell Road.

According to a written statement from the Village, no sludge or wastewater was released into Glen Helen as a result of the incident.

Ault arrived on the scene 15 minutes after being notified of the spill. He said with the help of Miami Township Fire-Rescue and their high-powered hoses, Village teams were able to reset the hose, unclog the drain and wash away the sludge from the driveway and road within an hour.

“It was no one’s fault,” Ault told the News. “It really was a freak accident. I’ve been here for 15 years and I’ve never seen anything like this. Still, we’re assessing what we can do to keep that hose secure so nothing like this happens again.”