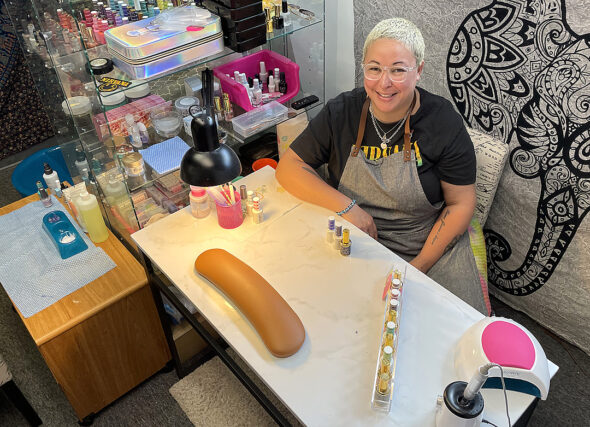 Walk into Kara Edwards’ new nail studio at 100 Corry St., and you will notice the tapestries of her favorite animal, elephants, hanging on the shop walls.

The tapestries evoke the natural world — an intentional choice for Namaste Nails, which Edwards described as a natural nail studio, and which she hopes offers a welcoming and peaceful environment for potential clients.

According to Edwards, Gel-X are soft nail extensions that are healthier than acrylic nails, and a good choice for people who work a lot with their hands. “They’re a really good alternative to acrylics, and last three to four weeks,” she said.

Edwards, who works full time as an office coordinator and assistant to the chief operating officer at Wilberforce University, runs Namaste Nails on a part-time basis, and is open on Fridays and Saturdays. “I really want to gain more clientele for sure, and my weekends are starting to get filled up,” she said.

She charges $28 for a basic manicure, $38 for a gel manicure and $36 for a pedicure. Edwards intends to keep her prices reasonable.

“I’m not here to price gouge people. Do I want to make money? Yes, I’m running a business, but I’m going to make sure they’re affordable prices. Everyone should be able to get their nails done, in my opinion,” she said.

So far, Edwards said her shop has received local support from residents.

Edwards decided to name her shop Namaste Nails, in part, because of her love of yoga.

“I like yoga, and I thought [the name] just kind of goes with the vibe of Yellow Springs,” she said.

However, Edwards said she received some push back for her business name when someone on the Yellow Springs Open Discussion group on Facebook accused her of cultural appropriation.

“I was very upset by it, I didn’t want anyone accusing me of that,” she said.

In response, Edwards asked a friend of Indian descent if they were offended by the name.

According to Edwards, her friend didn’t think naming her shop Namaste Nails was cultural appropriation.

Edwards earned a bachelor’s degree in business management from Ohio Christian College in Columbus, and has been a licensed nail tech for a couple of years. Edwards told the News she always loved doing nails and decided to get her nail tech license with the money she was receiving from unemployment when her work as a Lyft driver ceased at the start of the pandemic.

A single mother of a 12-year-old girl, Edwards decided to open a nail shop in town shortly after moving to Yellow Springs. She said she left Xenia in response to her daughter’s experience of racial harassment at the school she was attending. Edwards and her daughter have lived in the village for about six months.

“When I was about to move here, I really just put it out there that I am going to find a place, because my daughter went through a bunch of bad stuff there,” Edwards said.

After moving to Yellow Springs, Edwards observed the absence of nail salons here.
Edwards’ daughter has a different attitude toward getting her nails done than her mother.

“My daughter — you know, I can’t pay her to get her nails done? I said, ‘Really? You know what I would have done if I’d had a mom who was a nail tech? I would have loved that,’” she said.

Edwards, an only child, was born in Xenia and raised in the small farming community of Union City, just outside of Greenville, where her father, now retired, worked as a game warden. She said that she grew up on a farm.

“In nature, the country, in the middle of nowhere,” Edwards said.

Edwards’ love for her family is evident. She moved back to the area from Columbus when she gave birth to her daughter, and received support from her mother. Edwards said her mother quit her job of over 20 years to help Edwards watch her infant.

“I’ve been pretty blessed with that,” she said.

Edwards described her father as a cowboy who dresses the part. “He’s very serious about his attire. When people see him, they think he’s like super-duper country,” she said.

“He’s definitely a character, and I always tell people, the funny thing about it is, his favorite movie is ‘Friday,’” Edwards said, referring to the hit movie released in 1995 starring comedian Chris Tucker and rapper and actor Ice Cube. The film centers around an African American community in the California city of Compton.

Edwards is also an artist. “I love to paint, I like really abstract stuff. I don’t do it enough because I literally work all the time,” she said.

Edwards said she enjoys nature and being with family. “I like to be outside, spending time with my friends, being with my cousins. Since I didn’t have siblings, my cousins are like my brothers,” she said.

As much as Edwards likes nature, her schedule has not allowed her to enjoy the Glen just yet.

“I have to work on balancing my personal life and work life better. I wouldn’t say I’m a workaholic, but I might be on the verge,” she said.

Edwards describes Yellow Springs as having “a way better vibe than Xenia,” and really likes the community although she said she is aware that it is not as diverse as it used to be.

“There’s a lot of people who are open and accepting and that’s the key,” she said.