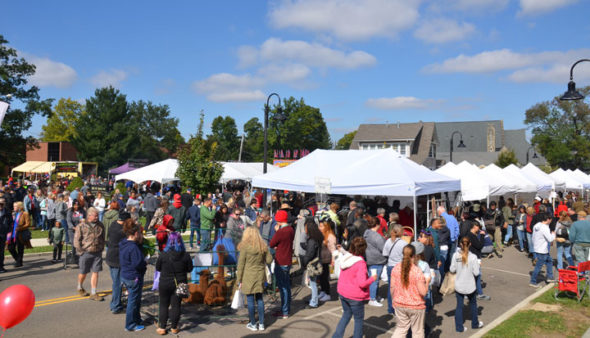 The view of Fall Street Fair 2018 from the porch at the Mills Park Hotel in early afternoon. Fall Street Fair will return to the village this October for the first time since 2019. (Photo by Olivia Hasek)

Street Fair to return this fall

After a two-year absence, Yellow Springs Street Fair is officially set to return this fall, on Saturday, Oct. 8.

This will be the first Street Fair since fall 2019. The last five scheduled dates of the semiannual fair — typically held the second Saturdays in June and October — were canceled due to significant transmission rates of COVID-19 in the region and state.

According to YS Chamber of Commerce Board Chair Mark Heise, the decision to revive Street Fair in the coming autumn was an easy one.

“Now, we feel we’re at a time when we can safely do it and bring it back,” Heise told the News in a recent interview.

Heise said he expects this Street Fair to bring more people to Yellow Springs than past events. In 2019, an estimated 26,000 visitors attended the fall Street Fair.

“People are ready to get out, ready to return to the public,” he said. “Every day, I get dozens of emails asking about Street Fair. ‘What’s going on?’ and ‘Is it still canceled?’ Well, here you go.”

One difference attendees may notice, however, will be the heightened measures to ensure public safety.

“In light of recent events, both the state of Ohio and the Yellow Springs Police Department are taking security very, very seriously,” Heise said, referring to the nationwide uptick in mass shootings. “I can say there will be quite a bit of visible and nonvisible security in place.”

Another change Heise wants to make for this fair is a renewed prioritization of local vendors — in particular downtown merchants from the Central Business District who want to set up a table in front of their business.

“I want people to know that we’re giving as much preference as possible to Yellow Springs-based vendors, more than we have in the past,” Heise said. “Music will be the same way. We’re trying to create a more local focus.”

Planning a Street Fair is not without its challenges, Heise said. Unlike in past years, this fair is being coordinated by an entirely volunteer-based cast of villagers and local business owners. Previously, the YS Chamber of Commerce had paid staff members — such as former Events Coordinator Alexandra Scott and former Executive Director Karen Wintrow — to pull the event together.

“It’s been difficult finding the time to do it all,” Heise said. “That’s the challenge at the chamber right now: being able to do the things that a paid person would normally do. Plus, [downtown businesses] are in the middle of the busy season.”

Heise said that in the end, it’s the net economic impact of Street Fair that makes his hard work worth it.

“For so many businesses and local vendors, Street Fair creates a huge increase in sales,” Heise said. “I’ve talked with so many business owners, and in doing an informal poll, the majority of folks say they benefit from Street Fair — even the ones who begrudgingly say it’s a pain in the butt.”

A more in-depth article about the Yellow Springs Street Fair and its effects on the local economy and population will appear in the News closer to the event in October.