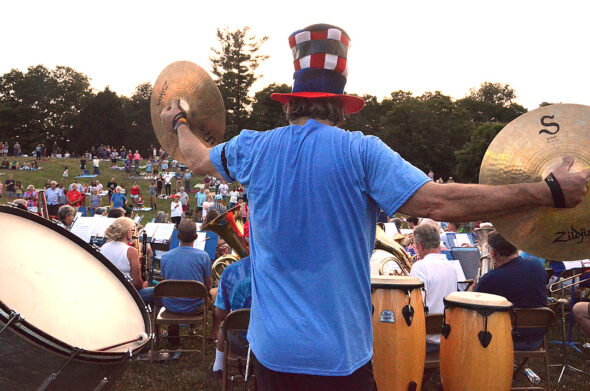 Towards evening on July 4th, the Yellow Springs Community Band played Americana tunes at the foot of Gaunt Park hill, culminating with the national anthem. (Photo by Matt Minde)

In addition to the traditional reds, whites and blues, the village’s annual Fourth of July celebrations took on several other hues this year: anger and sadness swirled and clashed with jubilation to color the festivities.

Many visitors and villagers alike gathered mid-afternoon to enjoy the downtown parade, organized by the local lodge of the Independent Order of Oddfellows. Later, many others assembled on the steps of US Bank to peacefully protest the Supreme Court decision to overturn Roe v. Wade, ongoing acts of police brutality against Black and Brown people across the country and recent threats to Indigenous sovereignty.

As demonstrators Tony Lewis and McKenna Banaszak Moore later told the News: “We wanted to challenge the idea of celebrating the Fourth by asking, ‘Who in this country truly has freedom and independence when so many of its citizens are oppressed?’”

Later, the day’s activities moved to Gaunt Park. As the sun began to set, the Yellow Springs Community Band played Americana tunes at the foot of the hill, culminating with the national anthem. After dark, fireworks lit up the sky, dazzling a crowd of several hundred spread across the park grounds. The final salvo signaled a race to Gaunt Park Pool for the start of traditional midnight swim. See these and many more photos online in celebratory color at ysnews.com.