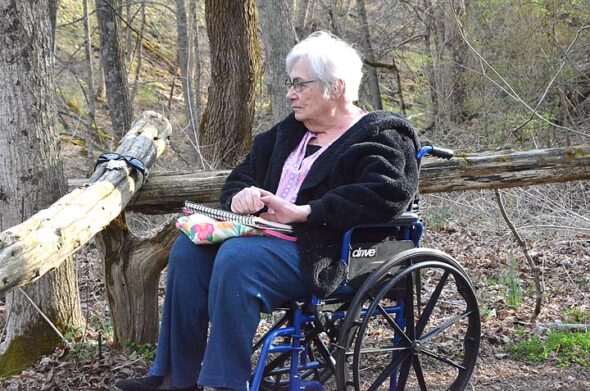 Last year, Columbus resident and artist Jenny Floch sketched in the Glen Helen Nature Preserve along Birch Creek on a visit last week with friends. Among the improvements leaders of the Glen are planning is to make the preserve more accessible to those with mobility challenges. (Photo by Cheryl Durgans)

The Glen now has an additional $750,000 in capital funds to use toward improving accessibility for people with limited mobility on trails. The total project budget for trail improvement at the Glen is $1.25 million, with additional funding procured through donations.

Allocated by the state on an even year basis, the funds generally go toward projects related to renovation or construction projects for state agencies, schools, colleges and universities. However, funds that “support community projects that offer a local or regional benefit,” are also provided.

The funds will ensure the renovation, completion and creation of bridges and boardwalks throughout the Glen. According to Glen director Nick Boutis, the funds will also be used to create the nature preserve’s first American Disabilities Act, or ADA-compliant trail.

“This requires very specific details on slope, handrails, and signage. We will be working to identify what existing or new trail will best fit,” Boutis said.

Boutis also said that the Glen wants to improve the overall hiking experience on many of the trails, even those that the preserve will not be able to make fully ADA-compliant, and to better provide people with information about what to expect along the trails.

“We can make areas more visible, and give people clearer information about what to expect so they can plan appropriately,” he said.

According to Boutis, the funds will allow the Glen to improve accessibility across the mobility spectrum — from wheelchair riders, young children and even for folks using the trails whose “knees aren’t what they used to be,” he said.

Improvement plans include constructing a ramp down to the Yellow Spring from the entrance on State Route 343, building a bridge to the Cascades and completely replacing the bridge across the Cascades. The Glen also plans to improve access to the Raptor Center by creating parking for those with ADA-compliant hang tags or plates.

“You’ll be able to drive right there and get out,” Boutis said.

Another major project includes adding a parking lot at the Glen’s entrance on S.R. 343, along with additional toilets.

“That will be something that will benefit everyone,” Boutis said.

Currently there are restrooms located in the Trailside Museum and Vernet Ecological Center.

According to Boutis, the Glen is working to get the trail improvements done “as soon as possible.”

“Parking will move forward first, which we hope to complete during 2022,” he said, estimating that the entire trail improvement project will be completed within two years.

Boutis said he is especially thankful for the efforts made by state Rep. Brian Lampton, who advocated for funding on behalf of the Glen.

“Representative Lampton went to bat for us. We were one of the only groups that were funded at the full request,” he said.

“We received 10 bids for the power plant demo, some that also included asbestos remediation, and four bids for just the asbestos removal itself. It was a good, competitive process, and we look forward to getting the work done this summer,” he said.

Boutis also expressed gratitude for the willingness by the village to cover some of the demolition costs, calling it a “matter of buttoning a bit of unfinished business.” The plant “once enabled the village to be its own electrical provider, and responsibility for clean up was something that really resonated with Council,” he said.