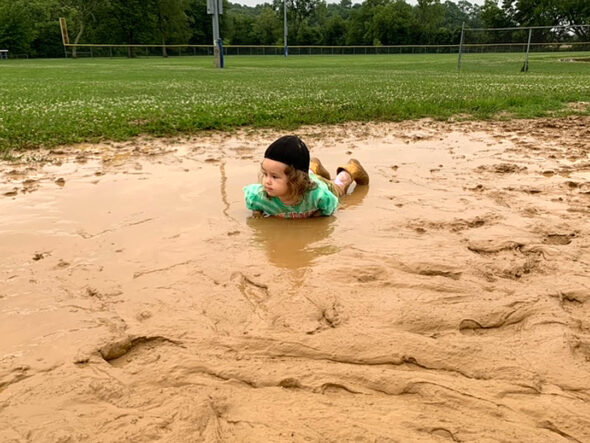 By Yunus Brevik and Margi and Rob Gay

Friday nights in the Village of Yellow Springs during summer are special. Why is this? Because Friday nights are when the magic of Perry League T-ball happens! This past Friday night, July 8, was no exception.

The wet weather early in the week, in addition to a rain-soaked Friday, created a new field medium for the children to play in — MUD, lots of slippy, sloppy, slimy mud! The effect the weather conditions had on the evening’s planned event was reflected in the sparse numbers of usual early attendees. When T-ballers and their crews did arrive, there seemed to be reluctance to test the water, or mud in this instance.

That is, until Valkyrie, age 6, with parents Deja and Simon arrived.

Valkyrie displayed her golden curly-girl nature, bursting with energy and enthusiasm, by immediately running out to the field to break in the mud pit. Rather than trepidation, she fully embraced the damp elements with a hearty and glorious expression of joy!

As others arrived, the big decision point of the evening was to wear shoes or go barefoot.
Some good choices were made — many a rain boot was seen: On Callie, 2, shark boots, of course! And, a shark shirt, too. This girl loves sharks! The Deal sisters were properly shod in rubber boots, and Isabel and mom were as well.

For those who chose to shun their shoes, there was a shared theme expressed as mud oozed through many toes, “This feels really good, much like a spa treatment!”

There were potential hazards if one opted to remain in the shoe-wearing category as Ronan discovered. The suction of the mud as he lifted his 4-year-old foot, quickly removed his shoe leaving him nervously dangling his sock-laden foot inches from the goo. He and his father, Jacob, huddled to deliberate the next move and quickly decided Ronan would join the sans-shoes group.
Bodhi, 4, had some anxiety about going shoeless but took the plunge and went barefoot. He had a good ball game.

The challenges the conditions created in the field were also witnessed at the batting tee. The T-stand wandered around all evening. Some kids wanted the tee to stay put, so they could bat from the puddle. Others wanted to stand on the home plate, so the tee was moved a few feet to the side. And yet a few others didn’t want to stand in the puddle or where the mud was too deep, so the tee moved a few feet forward so they could avoid the deeper mud. All the hitters decided their preference for the placement of their turn at the tee, allowing them to focus their attention on whacking the ball in an effective and efficient manner.

The lower attendance allowed all the players to receive seemingly endless opportunities at the plate.

Two-year-old Kai had many, many times at bat this week. He started out by slowly guiding the ball off the tee, gently nudging it with the bat so it dropped next to the tee. Later in the game he tried getting a bit of a swing. One time he hit it and the ball went about two feet. He just stared at the ball, almost as if he was trying to make sense of how he managed to get it that far from the tee.

By the end of the evening, Kai made it around the bases.

Later in the game, Isabel, 2, was able to go to bat multiple times in a row. She would hit the ball, fetch her own ball, reset the tee, then go switch bats. She tried out just about every bat in the equipment bag.

When Shiloh’s little sister, Ember, 4, had her turn at bat, Shiloh sweetly cheered for Ember from the bench. Her arms stretched and pumped upward while screaming her support along with family in the outfield and on field, including Auntie, who she loves so much, I was told!

As the game progressed, Coach Yunus gave hitters a choice: mud ball with mud piled on top, or clean-ish ball without a mud pile. Some delighted in the mud-piled ball but most preferred the more traditional, yet filthy, ball.

Allie, 6, showed up mid-game and came to bat with very clean clothes. That didn’t last long. By game’s end she was covered head to toe in mud, growling and saying, “I’m a mud monster.” Allie was observed creating “mud angels” along the third-base line, a sight to see, I assure you!

Not to be overlooked was Ewok, a cute pup that visited the batting bench and delighted the T-ballers with his cuteness.

Levi, 2, a rookie, made his Perry League debut. His family traveled here from British Columbia for the month of July, and we’re so glad. He got to work right away with a couple of strong hits for his inaugural T-ball game. Levi then got busy making a mud cake with, not surprisingly, mud frosting.

Yum! As we left the field, the cake was still in the works as mom and dad caught up with old friends.

Sarah, who just turned 5, seems to be perfecting her spinning hit. Her momentum from swinging the bat continues into a full circle spin, often resulting in resounding whack as her bat impacts the ball. Jay-Jay, 6, managed to hit the ball deep into the infield, impressive considering the mud-covered ball. Theo, 4, holds the bat like a lefty, yet decided on his third, and beyond, times at bat to hit from the side as if he was right-handed, though still holding the bat like a lefty. His swing almost resembled a golf swing, swooping down, then up.

The field, er, mud pit, was an enticing spot for kids and adults, once they embraced the ooze. The muddy conditions in the infield created an attractive space for all to display their talents. The challenges involved with fielding a muddy ball on an ever-changing surface cannot be minimized — it was tough going! At one point I commented, “They’re starting to blend in!” to which grandpa Steve replied, “the balls or the kids?”

Coach Yunus displayed a unique skill, as he masterfully mud-surfed the infield, beginning with a full force sprint, then gliding effortlessly across the surface in a manner unlike anything seen without a surfboard.

The coaches weren’t sure what game was being played in the puddle located in the outfield between first and second bases, but at times about half the players were out there. When asked, the group responded, “we’re making mud pies.” If that was the case, there was plenty for everyone to enjoy.

One child, Erin, 11, somehow managed to participate in all the activities on the sloppy field and remain remarkably clean! It would appear as though her many years in the league allowed her to navigate the tricky circumstances in a manner others found unworkable.

That’s a wrap on week six of Perry League T-ball. We have three more Fridays left including the last one, July 29, when we’ll have abbreviated play and a cook-out. The league will supply a variety of hot dogs and plates and cutlery. We ask families to bring something to share; a sign-up sheet will be at the field the next two weeks. Also, we will have some fun planned for the adults after the cook-out.

Please join us Fridays at Gaunt Park 6:30-8 p.m. for a fun time, no matter the conditions.