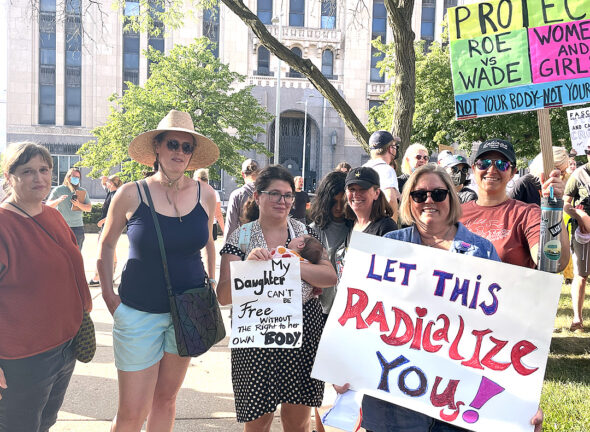 In a 6–3 decision, the Supreme Court of the United States has overturned Roe v. Wade, the 1973 decision that affirmed the right to an abortion.

The decision, announced Friday, June 24, and penned by Justice Samuel Alito, holds: “The Constitution does not confer a right to abortion; Roe and Casey are overruled; and the authority to regulate abortion is returned to the people and their elected representatives.”

Justices Stephen Breyer, Sonia Sotomayor and Elena Kagan wrote the dissenting opinion, saying that “Roe and Casey well understood the difficulty and divisiveness of the abortion issue,” but that the Supreme Court had “struck a balance” with its decisions in the past.

“[The Court] held that the State could prohibit abortions after fetal viability, so long as the ban contained exceptions to safeguard a woman’s life or health,” wrote Breyer, Sotomayor and Kagan.

“It held that even before viability, the State could regulate the abortion procedure in multiple and meaningful ways.”

In response to the assertion that abortion will still be legal in some states, the dissenting justice wrote: “That is cold comfort, of course, for the poor woman who cannot get the money to fly to a distant state for a procedure. Above all others, women lacking financial resources will suffer from today’s decision.”

The dissenting opinion also points out that overturning Roe and Casey may allow states to legislate whether people seeking abortions can cross state lines to do so, or if they will be able to have medications mailed to them from out of state.

This ruling comes shortly after a leaked draft of the decision was circulated, causing mass demonstrations across the country.

In a press release, Planned Parenthood affiliates reacted to the decision:

“Even though thousands marched in the streets across the country following the leaked draft decision, the Justices ignored the will of the people and revoked an essential constitutional right,” the release read.

Kersha Deibel, CEO of Planned Parenthood of Southwest Ohio, said the decision was not a surprise, but was “infuriating to witness.”

Late Friday, Gov. Mike DeWine signed an executive order that would put a “heartbeat” ban into effect immediately, ceasing access to abortions after a fetal heartbeat is detected — about six weeks into a pregnancy. DeWine originally signed the bill into law in 2019.

According to a tweet from the Ohio Attorney General’s office, Dave Yost filed a motion to remove the injunction that stopped the state from enforcing the law within hours of the Supreme Court’s decision. U.S. District Judge Michael Barrett lifted the injunction.

DeWine, who answered several questions from the News during a press conference, said he believed that supporting women and families was important and would be bringing legislation forward to do so, and that any further legislation would need to include exceptions to protect the life of the gestating fetus.

“I don’t think anyone who is proposing abortion bans would propose one that did not include an exception for saving the life of the mother,” Dewine said. “Part of what’s in the heartbeat bill I signed that is now law certainly has that exception.”

In a press conference hosted by Planned Parenthood Ohio, Jessie Hill, associate dean for research and faculty development at Case Western Reserve University’s school of law answered questions about the changing abortion laws throughout the U.S.

“This is not over today in Ohio,” she said.

In response to a question from the News, Hill said that the state is moving “aggressively.”

When asked whether a person or doctor could be prosecuted for sending abortion medication to a state where abortions are illegal, Hill did not comment on specific legalities, but called the future of abortion rights “uncharted territory.”

“States do not enforce their laws beyond their borders. With things like bringing pills across state lines, it will depend on which states are involved,” Hill said. “It’s hard to give generalizations, but it’s definitely an issue that’s going to arise.”

“The pharmacist who wouldn’t order Plan-B is gone, and I’m working to ensure we keep them on our shelves,” she said.

According to Chance, Yellow Springs Pharmacy has re-ordered several versions of emergency contraceptives that can be purchased for as little as $6.69.

“We are offering Levonorgestrel over the counter — no prescription, no judgment,” Chance said.

Iris Harvey, CEO of Planned Parenthood Greater Ohio, said that the organization would do everything it can to help people access safe, appropriate healthcare — including providing childcare and transportation costs for those who may need to cross state lines for an abortion.