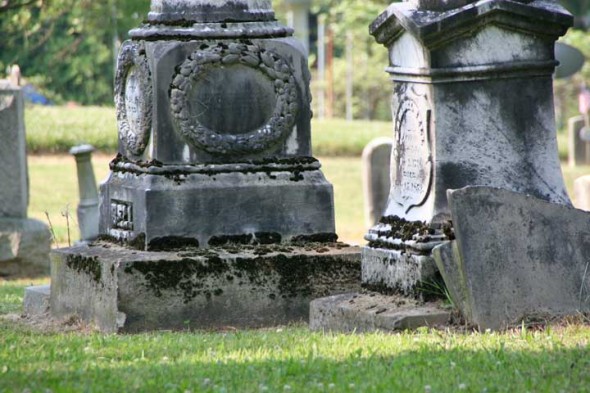 At the Miami Township Board of Trustees regular meeting on Wednesday, July 6, local cemeteries were at the forefront of discussion. Trustees heard a land management proposal from local residents seeking to better maintain cemetery ground. (News archive photo)

Local cemeteries were at the forefront of discussion during the regular meeting of the Miami Township Board of Trustees on Wednesday, July 6.

The dialogue began with villagers Theresa and Jerome Borchers proposing the establishment of an advisory and work group to address issues with invasive and nuisance plants at Glen Forest Natural Burial Cemetery.

Theresa Borchers began by lauding the natural burial site as a “treasure,” citing the Borchers’ experience with the burial of their son Martin, who died in 2020, at the cemetery.

“It was such a gift to have the wonderful resources of the natural cemetery, and right in our home area, and we have a lot of gratitude towards the Township for providing that,” she said.

However, she said, as she and Jerome Borchers have worked to maintain their son’s plot, they have encountered and removed plants like Canada thistle and poison hemlock growing at the cemetery; both of those plants are identified as “prohibited noxious weeds” by the Ohio Revised Code. Also present, she said, are plants like ragweed, which often cause issues for those with seasonal allergies.

“It can be really overwhelming,” Theresa Borchers said. “​​We’d like to be part of a team and get some resources to help with that.”

“There are some practical things that I think we can implement that don’t have to cost a lot of money,” Jerome Borchers added.

Their proposal, Theresa Borchers said, is to gather a team of community members who are “interested and invested in putting hands on the ground” to combat nuisance and invasive plants, as well as to help gather information and make recommendations to the Township.

Trustees Marilan Moir and Don Hollister spoke in favor of the Borchers’ proposal.

“I see it as a plus,” Hollister said.

Moir added that the proposed group would ideally stay in communication with Township staff overseeing the cemeteries.

The trustees voted unanimously to establish the Natural Burial Cemetery Advisory Committee, of which the Borchers will be members, with Moir to serve as its board liaison. The committee’s next steps will be to fill out its membership and to appoint a committee chair.

The board continued discussion of its new natural burial site, Oak Grove Cemetery, the idea for which was introduced by Trustee Chair Chris Mucher in 2019 and most recently discussed at the board’s June 6 regular meeting.

The new cemetery, which is being spearheaded by Mucher, will be located on 5.8 acres of land behind the Glen Forest Natural Burial Cemetery on U.S. 68; the land was purchased from the Village of Yellow Springs by the Township in 2018.

As the News reported previously, the cemetery will host a unique feature: natural grave sites over which native swamp white oak trees will be planted one year after a natural burial — in this case, a natural burial requires that there be no casket. Each plot will be 10 feet by 10 feet, or 100 square feet, in dimension. Those who purchase these large plots will also be entitled to have the cremated remains of other family members interred on the same plot.

Mucher reported that the new cemetery will hold a total of 600 plots, with 70 of those being oak tree plots. The cemetery is currently in its first phase; next steps involve a survey of the land and digging a well on the site.

The oak tree plots, Mucher said, are unique enough that he knows of “no other” similar examples.

The trustees briefly discussed deciding what the oak tree plots might cost, including a consideration for giving precedence to Miami Township residents.

The board made no decisions on that front, but will continue its discussion of the finer points of the new cemetery in meetings to come.

The board also approved the addition of a third columbarium, which will hold and display funerary urns, to two existing columbariums recently built at Glen Forest Cemetery. The suggestion to add a third had been made by Mucher at the board’s June 27 meeting, but was tabled in order to allow Moir, who was absent on the 27th, to discuss the suggestion and vote.

• Mucher reported that the Township had received complaints from community members about the perceived unsightliness of the north side of the Miami Township Fire-Rescue building.

“It has huge louvers that dominate the whole side of the building … and they have gutters that come down right next to the louvers … and then there’s basically nothing between the public and the louvers,” Mucher said.

He added that he had received a suggestion that the Township plant flowering dogwood trees on that side of the building in order to improve its aesthetic.

The board, Mucher said, had promised former Trustee Lamar Spracklen that a tree would be planted in his honor upon his retirement.

“And I thought, as long as we are planting a tree for Lamar, [we should] make the other one a dedication tree for Mark Crockett,” Mucher said, referring to the longtime trustee who died in May.

The board unanimously approved a motion to proceed with the planting of the dedication trees.

• The board approved a resolution to proceed to place a 3.5-mill levy on the November ballot. The resolution follows last month’s approval of a resolution of necessity for the levy, which stated the board’s decision that a levy is needed to the Greene County Auditor, and the certification of that approval by the auditor.

The resolution, according to its filing notice, is for the purpose of “the payment of firefighting companies or permanent, parti-time or volunteer firefighting, emergency medical service, administrative or communications personnel to operate the same, including the payment of any employer contributions required for such personnel under section 145.48 or 742.34 of the Ohio Revised Code.”

• The board approved an agreement between the Township and Greene County engineers for overlay repaving on township roads.

• No MTFR or zoning reports were made at the meeting due to the absences of Chief Colin Altman and Zoning Inspector Richard Zopf.