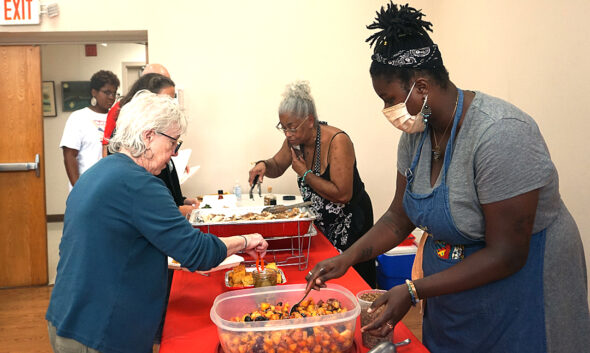 Locksley Orr, left, and Robyn Weigand serve lunch to participants of The 365 Project’s Black Food Traditions tour. Orr, who owned a business on the corner of Dayton and Corry streets, prepared a meal that would have been featured in her restaurant. (Photo by Jessica Thomas)

All I Care to Eat | A meal outside of time

If you’ll indulge me, rather than writing about a favorite dish from a local eatery, as is the purported bent of this occasional column, I’d like to shake things up a bit. Admittedly, this being only the column’s fourth entry, it might be a little early to be taking a different tack, almost right out of the gate.

And yet, this space is given to me to wield (mostly) as I see fit, filling it with my own thoughts, impressions and general tomfoolery as whim dictates. What’s that old expression? “Deviation is the spice of life?” It’s something like that, anyway.

I’ve read a lot about the Yellow Springs of yesteryear. It’s part and parcel of being a reporter for the News. Thumbing through the hardbound archives we keep here in the office to find historical context for something I’m writing, it’s easy for me to get lost reading the stories and ads of yesteryear. An hour will go by, and I’ll have forgotten what the heck I was actually looking for, but I’ll be wiser for the knowledge that, in 1967, you could get two pounds of prunes for 59 cents at Luttrell’s.

This September will mark 13 years in the village for me. Over those years, I’ve read and heard a wealth of stories about the many ways Yellow Springs has shaped and reshaped itself, and of its people, places and things — some foundational to the memories of folks whose lives have intersected with this town for a time — that have been lost.

If you’re reading this paper in order, you’ll have already read my colleague Jessica Thomas’ story about the food-centric “Blacks in Yellow Springs” tour that was held last weekend. Since she’s already done an admirable job of it, I won’t take pains to recount the nature of these tours — though I will urge you to attend a few, if you haven’t already.

As a lover of both food and local history, the “Black Food Traditions” tour was a no-brainer for me. I’ve long heard stories about places like Gabby’s Pit BBQ and Com’s and wished I could, just for an afternoon, step back through the veil of time and get a taste of the dishes that so impressed generations of folks that they’re still talking about them decades after they’re gone.

Assuming that’s it, I believe it.

I used to talk a lot with my former co-worker, the late Lauren Heaton — with whom I shared not only a first name, but also a predilection for talking about food and the past — about the difference between having lived in Yellow Springs a long time and being from Yellow Springs.

Lauren was a village native — a self-described “Townie.” Her legacy of being well and truly from Yellow Springs was firmly established. How long, I asked her, would I need to live here until I was from here? She didn’t know. She encouraged me to ask again when I’d been here a decade.

We didn’t end up having that conversation before she died, but I still meditate sometimes on what we might have decided between the two of us.

After the tour — held indoors at the Bryan Center due to the rain and presented by the fabulous Gini Meekin — was finished, it was time to eat. Locksley Orr, who herself belongs to the annals of the village’s food history as the owner of a former Dayton Street restaurant, fed us an incredible meal. She and Robyn Weigand served jerk chicken, beans and rice, greens with okra, balsamic tomatoes and sweet potato cornbread. The meal was capped with a dessert of no-bake cobbler, made with perfectly ripe peaches and cherries sprinkled with a crumbly topping of juice-sweetened nuts and dates. (We’re still talking about that cobbler in the office several days hence.)
Orr played a recording to set the mood for our meal. In it, music played softly and a waiter with a smooth baritone voice described what we could expect for the courses to come. Orr pointed out that he wasn’t describing the actual menu we would enjoy, but it didn’t matter — the waiter’s purpose was to transport us from the fluorescent-lit second floor of the Bryan Center to another plane entirely.

Seated at the table with friends and neighbors — and my daughter, the only village native in our family — time was no longer the endless film reel that ratchets on in one direction. For the space of a meal, we were in both the past and present, buoyed extratemporally by the memories shared by those who had lived and loved Com’s, Gabby’s and Orr’s own restaurant when they were still here.

Listen, it’s prosaic, but I’ll go ahead and say it, because that’s what they pay me for: While we ate, no matter where we were from, we were all Townies.