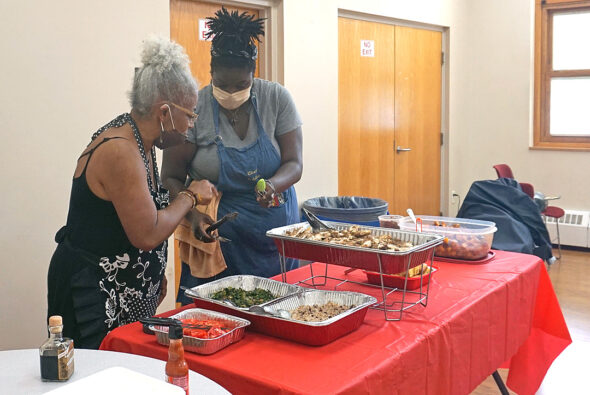 Locksley Orr, left, and Robyn Weigand prepare to serve lunch to participants of The 365 Project’s Black Food Traditions tour. Orr, who owned a business on the corner of Dayton and Corry streets, prepared a meal that would have been featured in her restaurant. (Photo by Jessica Thomas)

Com’s restaurant, MaJaGa Bar and Jazz Club, the Union House Hotel — these are all businesses that thrived in the Yellow Springs of yesteryear. That history — the history of Black-owned restaurants and food establishments — was the focus of the most recent Blacks in Yellow Springs walking tour, hosted by The 365 Project.

Over 30 people attended an alternate tour experience led by Yellow Springs High School sophomore Gini Meekin; the event was held in the Bryan Center due to forecasted thunderstorms in the area. Meekin emphasized both the businesses themselves and offered insights into the ebb and flow of Black business ownership in the Village, beginning with a short history of Blacks in Yellow Springs.

“The antislavery sentiments of the founders of Antioch College may have influenced Black people to come to the village,” Meekin said. “Yellow Springs was also attractive to Black people because of Wilberforce University, which became a college of the African American Methodist Episcopal Church in the 1860s.”

Meekin told the group that while Yellow Springs residents opposed slavery, the community was segregated, and Black people were not welcome in many white-owned restaurants. As a result, Black residents and churches established their own eateries, some of which began in church basements to support church activities.

“Eating out was not a common practice, making the inexpensive cooking provided by Black churches an important source of nourishment and also socializing. The First Baptist Church was founded in 1863,” Meekin said.

First Baptist Church was known for holding an event during National Negro History Week, which was started in February 1926 by Carter G. Woodson, and is a precursor to Black History Month.

“The [Calendar] Tea has been the church’s main fundraising event used to fund operational costs,” Meekin said. “There has never been a charge for admission; instead, the church has donation baskets available, but the main focus of the tea was to promote fellowship between community members and enjoy an afternoon together.”

The bulk of the presentation focused on establishments in the two downtown business districts on Xenia Avenue and Dayton Street. 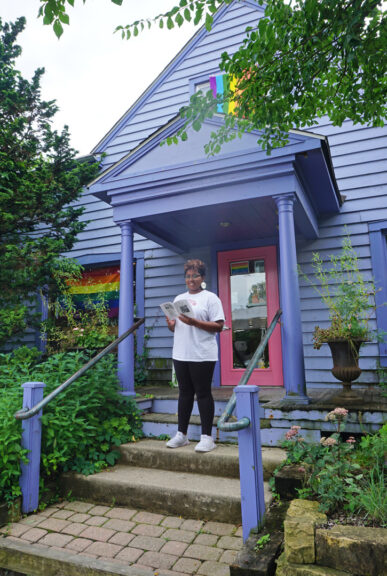 On Saturday, July 23, sophomore Gini Meekin led a group in a “Black Food Traditions” tour — part of a tour series hosted by The 365 Project — which focused on Black-owned businesses. Above, Meekin stood in front of the Winds Wine Cellar, a building that formerly housed two Black-owned restaruants, Cassano’s Pizza King and Gabby’s Barbecue. (Photo by Jessica Thomas)

“When they closed the business, they arranged for Gabby [Mason] to open a barbecue shop in the building,” Meekin said.

“Gabby’s barbecue was world-renowned,” he said.

On Dayton Street were businesses like MaJaGa Bar and Jazz Club, also owned by the Jones family, and the Gypsy Cafe, owned by local resident Locksley Orr. By the time Orr opened the cafe, hers was the only Black-owned restaurant downtown.

Other stops on the tour included the Union House Hotel, the Antioch Inn and Com’s, a beloved restaurant where village residents, college students and visitors were welcome.

In response to Meekin, an audience member shared fond memories of Com’s, saying that it was unique for its interracial and intergenerational mix of people.

“It was one of the few places where students, families, and people of color, different ages, would be,” the audience member said. “I can remember it so vividly — an amazing place.”

The structure that formerly housed Com’s is now a private residence, Meekin told the group as a conversation ensued. Several villagers spoke about the changes of ownership of Black-owned establishments. Com’s is another business that could not exist in the present day, as restaurants and bars are disallowed in residential areas of Yellow Springs.

In response to a question asking about the declining number of Black-owned restaurants, Gudgel said that growing up, he and his family went to Black-owned businesses in order to avoid establishments where they would feel unwelcome.

“That’s why people went to Com’s, to Gabby’s,” Gudgel said.

Gabby’s BBQ had several iterations, according to Meekin. Selling barbecue out of his home, Mason would welcome neighbors and friends, inviting them with his catchphrase, “It’s nice to be nice; try it.” Villagers still celebrate Gabby Day, promoting the spirit of community and fellowship that Mason shared with villagers.

The presentation ended with an overview of Black people who own food-related businesses and a list of future student-led tours that will take place as the season closes. In a follow-up interview, Kevin McGruder, Antioch professor and member of The 365 Project, said the tours are a way for Black students to engage with the community while learning local history.

This year, students asked to add tours focusing on food, sports and the arts. After hearing the suggestions, McGruder and other student advisors suggested adding a new element to the food tour.

“It would be a shame to talk about food and not have any,” McGruder said. The 365 Project reached out to Orr, now a caterer, whose former restaurant is a stop on the tour, to provide food for the event.

“In the past, Locksley Orr would meet with us [on tours] and talk about the [cafe],” McGruder said. “She recently catered the meal for the Juneteenth walkers, and she was really excited about this event.”

In a short presentation prior to the meal, Orr elaborated on her cafe, which featured food from Latin American and Caribbean countries in a menu that changed weekly.

“Latin and Caribbean food covers a lot of places. There are darker-skinned Black people in many of those places — Black Cubans and Black Dominicans,” Orr said. “People would come in the restaurant when we first got here and say, ‘Well, don’t you cook American food?’ There’s no such thing. We’re influenced by everything, so that’s the way I cook.”

“I made greens because everyone has a green in their culture that they eat. So we knew collard greens, but in Jamaica, they have callaloo, you know, which is similar to collard greens. If collard greens and spinach had a baby, it would be callaloo,” Orr said. “There’s all kinds of influences, African influences, in cooking.”

Reflecting on the food traditions the group learned about, Orr shared her mission for her restaurant:

“The concept is really based on food being a common denominator,” Orr said. “We are more alike than we are different. The food joins us together.”