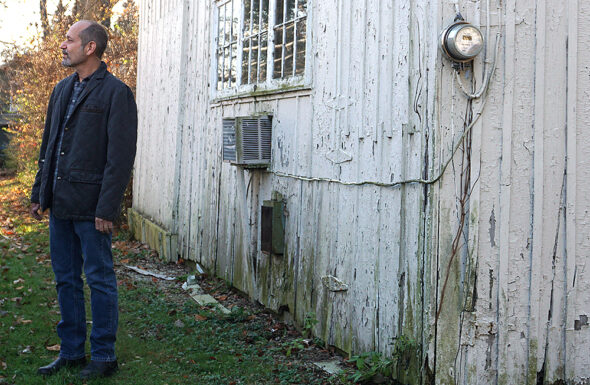 Villager and writer Robert Freeman Wexler’s new novel, “The Silverberg Business," is set to be released by Small Beer Press on Aug. 23, with a local book launch at the Emporium on Aug. 27. (Photo by Lauren "Chuck" Shows)

The enduring allure of fiction writing is that, really, anything can happen. In villager and writer Robert Freeman Wexler’s new novel, “The Silverberg Business,” it does.

Wexler’s fiction has, in the past, been described — including a few times in this publication — as defying genre. “The Silverberg Business,” too, is ineffable in its way; in a recent interview with the News, Wexler described the book as “a Western…ish.”

“But it’s more of a historical noir detective novel that just happens to be set during a period you would call ‘Western,’” he said. “And it doesn’t matter — whatever people want to call it.”

The book’s focal character is the surname-only Shannon, a late-19th-century detective working with a private agency in Chicago. Shannon is hired by Rabbi Henry Cohen — one of a few actual historical figures Wexler incorporated into the narrative — to investigate the disappearance of Nathan Silverberg. The disappearance follows Silverberg’s meeting with a trio of land speculators, from whom he hoped to purchase land in coastal Texas to create a colony for Romanian Jewish refugees.

Wexler said the creation of Shannon was partially inspired by the work of Dashiell Hammett, a former Pinkerton detective turned detective novelist most famous for the 1930 novel “The Maltese Falcon,” which was later adapted into a film noir classic. Having steeped himself in reading Hammett’s hard-nosed detectives, Wexler said his approach to writing about the people Shannon encounters marked a departure from his own past work. 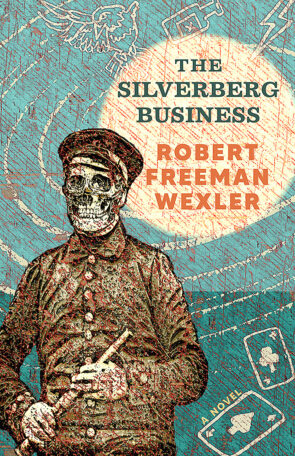 Artist and musician Jon Langford created the cover art for “The Silverberg Business.” Langford’s art — including the depictions of skull-headed country and western musicians featured in his book, “Nashville Radio” — served as a major inspiration for the novel. (Submitted photo)

“I really absorbed [Hammett’s style], so there’s a lot more description of characters than I usually write,” he said. “In some ways, I don’t care what people look like exactly, but it makes sense for Shannon — he’s a detective, an observer. … I intended it to be more straightforward.”

That straightforwardness, however, becomes increasingly brined in the uncanny — a trickle at first, and then in a swift-crashing wave — as Shannon pursues Silverberg and the suspected fraudsters. Traversing Texan vistas — familiar to Wexler, who is a Texas native — Shannon slips into an altogether unfamiliar plane, alien and wild and inhospitable to him, populated with inscrutable life. In the novel, Wexler describes the place as a “scratch land” — a phrase he borrowed from his partner Rebecca Kuder’s 2021 novel, “The Eight Mile Suspended Carnival.”

“And then a reviewer from Publishers Weekly picked up that phrase, ‘scratch land,’ and used it in the review,” Wexler said. “Which is really funny. It’s just the way [Kuder] and I work, you know — interchanging our own things.”

A stranger in a very, very strange land, Shannon makes his way to an impossible saloon, populated by “skull-heads” — that is, people whose bodies seem normally human, except that their heads are bare skulls.

One of these skull-heads graces the cover of “The Silverberg Business.” The cover art was created by Jon Langford, Welsh artist and musician with The Mekons, among several other bands. Wexler said Langford’s art served as another major influence for the novel. In particular, he drew inspiration from pieces featured in Langford’s book, “Nashville Radio,” which includes renderings of country and western musicians, sometimes depicted with skull heads.

“Pictures of these skull people intrigued me and I started thinking about them as characters,” Wexler said, adding that he asked Langford, who he has known for several years, to produce the cover art for “The Silverberg Business” before the novel was even set down on the page.

The skull-heads, seemingly trapped in an eternal cycle of drink, cards and barroom dance, are primally connected to the “business” of “The Silverberg Business.” It’s partially through the time he spends with the skull-heads, appraising their rules and rituals, that Shannon begins to understand the nature of the mystery he’s investigating — or, as much of it as is within his capacity to understand, anyway.

The unfathomable nature of Shannon’s investigation is tempered by the super-reality of his relationship to his own plane of existence — that is, America in 1888. Shannon, like Wexler himself, is Jewish. His surname is an Americanization of his family’s real name, Chanun; Shannon was originally foisted onto his forebears by “the bilge rats in charge of immigration … in New York,” though he admits that it allows him to slip into society’s crannies more easily.

“No doubt some people can see the secret marks on my forehead, but most take me as a regular American,” Shannon says. “I don’t feel like one; I doubt Jews will ever feel they belong with the regular Americans.”

Wexler said Shannon’s feeling of being the “other” perhaps makes him more perceptive to another reality of 1888: the lives of formerly enslaved Black Americans, 23 years post-emancipation. For his part, Shannon does not share the high-key racist attitudes of most white Americans in the novel.

“I wanted to make [Shannon] more progressive — there must have been progressive people, probably not most people,” Wexler said. “One thing I wanted to find out [in research for the novel] was how people were interacting at that point … and something that I … read about is Jews in the North and Jews in the South, their attitudes.”

As Shannon muses: “​​Living in the slave-owning South made Jews feel less exposed, less likely to be persecuted. Whatever people thought of us, they thought even less of slaves and free Negroes.”

Wexler said it’s also this insight into otherness that eventually aids Shannon in finding common ground with the skull-heads after spending unnumbered, timeless days with them in a long game of Five Card Stud.

“It’s part of his being a progressive — they can kill him easily, and maybe would if he did the wrong thing, but he accepts them as people,” Wexler said.

As he travels, with difficulty, between the no-man’s-land of skull-heads and unearthly landscapes and Texas, Shannon manages to find beauty in both places. He also finds himself as a man perpetually caught in his own, internal alternate plane: American, but Jewish; in this “scratch land,” but not of it; back in the “real” world, but made different by his surreal experiences.

What happens to literary heroes — both physically and psychologically — after they return home from fantastical worlds and events is often unexplored in fiction, but the latter portions of “The Silverberg Business,” even after its mysteries mostly resolve, keep this thematic element close to heart. Wexler likened the notion to the real-world experience of returning home from any long sojourn outside your own sphere.

“When you travel somewhere exotic, it’s really weird to come back,” he said. “It smells different, everybody looks different suddenly, different shapes and sizes. [Shannon] learned to exist in this other world.”

And Shannon must learn, again, to exist here. To paraphrase Woody Guthrie, he ain’t got a home in this world — or the other — anymore.

A book launch and signing event, “Robert Wexler in Conversation with Rebecca Kuder on ‘The Silverberg Business,’” will be held Saturday, Aug 27, beginning at 7 p.m. at the Emporium. Books will be available for sale and signing at the event, courtesy of Dark Star Books & Comics.

For more on “The Silverberg Business,” and Wexler’s other works, visit robertfreemanwexler.com.