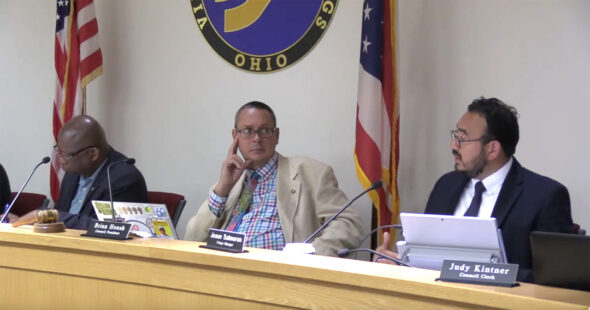 At Village Council’s regular meeting on Monday, Aug. 15, Council members unanimously approved a use policy for the village’s municipal broadband utility services. The policy enshrines the privacy of the village residents who opt into the new Wi-Fi service.

The municipally owned fiber optic broadband utility, dubbed “Springs-Net,” aims to provide high-speed internet access to the 1,800 homes and businesses in town. Although the utility is still in its pilot phase, 80 residences have opted into the program and will soon receive internet speeds at either 300 megabits per second — costing $45 per month, or 1 gigabit per second, at $65 per month.

The ordinance to approve a use policy for municipal broadband went before Council as an attempt to prevent unwanted surveillance, data mining or any breach of privacy enacted against any user of the internet service.

During the ordinance’s first reading at the Monday, July 18, Council meeting, one of the use policy’s architects, villager Ellis Jacobs, explained the usefulness of having robust protections in place.

“As we know, elsewhere in the country, in the past, municipal broadband networks have been used to provide the government information without the government getting the proper search warrants, and they’re routinely used to share information with third parties who sell the information to others,” Jacobs explained. “By adopting this particular ordinance the village would be adopting one of the strongest privacy and net neutrality protections in the country for a municipally operated broadband network.”

Timothy Barhorst, who helped Jacobs craft the technical semantics of the use policy, explained at that meeting that detailing prohibited and permissible uses of municipal broadband can benefit both the internet service provider, or ISP, and the internet users.

“You have to have such policies in place to protect both the users and the ISP themselves from abusive situations, illegal operations, spam, unauthorized access and hacking,” Barhorst said. “If you don’t state it, you’ll be in legal trouble.”

Among the prohibited uses in the policy are: transmission, distribution or storage of any material in violation of any applicable law or regulation; sending unsolicited bulk emails or spam; unauthorized attempts by a user to gain access to any account or computer resource not belonging to that user; obtaining service by any means or device with intent to avoid payment; and other stipulations.

In the interest of user privacy, the policy states that information will only be shared with other entities as legally required by a subpoena, court order or other legal process. Any such requests will undergo a review to validate relevance and validity.

“I am very proud of this policy,” Village Manager Josué Salmerón told the News in a follow-up interview. “It embodies the values of our community. Access to the internet has the potential to change lives. We want to ensure it is for the better.” 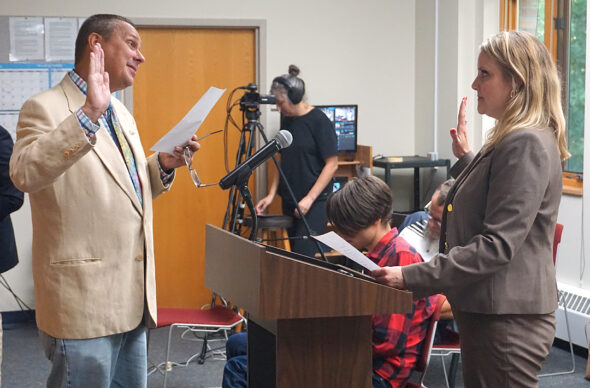 For her routine services as solicitor — including attending one Council meeting and one Planning Commission meeting per month; drafting ordinances, resolutions and legal memoranda; providing legal advice relating to matters of public law to Village staff; and reviewing and approving all contracts — Blankenship will be paid $10,500 per month. Her initial term is two years.

Blankenship is an attorney with Frost Brown Todd LLC, a law firm with over 500 lawyers and locations across eight states. Previously, she served as law director and assistant law director to several municipalities in southwest Ohio, and also as a former deputy director of Dayton’s law department.

In the past, Blankenship filled in for a previous Village solicitor, Chris Conard, when he was unable to attend local meetings.

Before Blankenship’s swearing in, Council member Marianne MacQueen asked Blankenship how she will avoid conflicts of interest, should her law firm take on a client who has an “adversarial” relationship with the Village.

“[Frost Brown Todd LLC] has a very robust conflict-check process,” Blankenship responded. “We have a team of conflict attorneys whose full-time jobs are to run through possible conflicts [of interest]. Work has to go right back out the door if there’s a conflict that can’t be weighed or addressed properly.”

Blankenship said she hopes to keep the Village’s legal expenses “under control” as the new solicitor. To her, that means managing her retainer so that the Village staff knows which of her services are routine and nonroutine.

Housh said he was pleased with Blankenship’s prioritization of saving the Village money.

“Ultimately, we don’t need to dance around [the fact] that our legal expenses are jumping up,” he said. “I think that’s why those of us who have worked with you trust that you are thinking about that.”

“I take that as a great vote of confidence,” Blankenship said.

In response to written communications from villagers Rebecca Kuder and Pan Reich, and mounting concerns from other Yellow Springs residents, Council members addressed the growing rate of COVID-19 transmissions.

The Ohio Department of Health, or ODH, reported that as of Thursday, Aug. 11, Greene County has 738 active cases of COVID-19. For the sixth week in a row, the county is listed as having a “high” transmission rate for COVID-19 by the Centers for Disease Control and Prevention, or CDC. According to the recent ODH report, Greene County has 436.8 cases per 100,000 residents.

However, in his manager’s report, Salmerón said that the viral load samples taken from the Village’s wastewater treatment plant have shown a decrease in the presence of gene copes and fragments of the virus that cause COVID-19.

“The data shows that [Yellow Springs has] been decreasing for a while now in terms of viral load,” Salmerón said, noting that monitoring wastewater samples can provide early signs of viral detection in the municipality, and point to trends.

“Where are we headed? I’d like to think downwards, but I just don’t know,” Salmerón said.

Still, with the increase in new cases in recent weeks, Council members weighed the possibility of once again declaring a state of emergency in Yellow Springs. Doing so would allow Council to reinstate a villagewide mask mandate.

All five Council members were in general agreement that, without top-down guidance and support from federal and state governmental bodies, COVID restrictions would be challenging to enact in the village.

“It makes more practical sense for a state of emergency to be issued at a broader level,” Council Vice President Kevin Stokes said. “We’re like one of the smallest entities in the state. COVID doesn’t recognize the boundaries of the village. If a larger entity like the county or the state would issue a mandate, then we would be within a larger bubble.”

Both Housh and MacQueen agreed, saying they sensed that Council was not prepared to declare a state of emergency.

“I’m not convinced that there’s a viable strategy,” Housh said.

Noting Kuder’s letter that called for a mask order to be imposed before the Oct. 8 Street Fair date — when several thousand visitors will likely come to the village for the event — MacQueen said she believed leaving the decision to mask up to the individual is more practical than a mandate.

“I do not support having an outside mask mandate, which was one of the requests for Street Fair,” MacQueen said. “I support people taking care of themselves by wearing a mask if they feel they need to.”

“Mandating is one thing, but how is it enforceable is always my question,” she said. “What kind of participation would that involve from our police department?”

Although no formal decision was made, all Council members agreed they were open to continuing the discussion and further monitoring rates of COVID transmission.

“And if any business wants to have an indoor mask policy, we’ll support it,” Salmerón added.

Additional coverage of the Aug. 15 Village Council meeting will be in next week’s edition of the News.