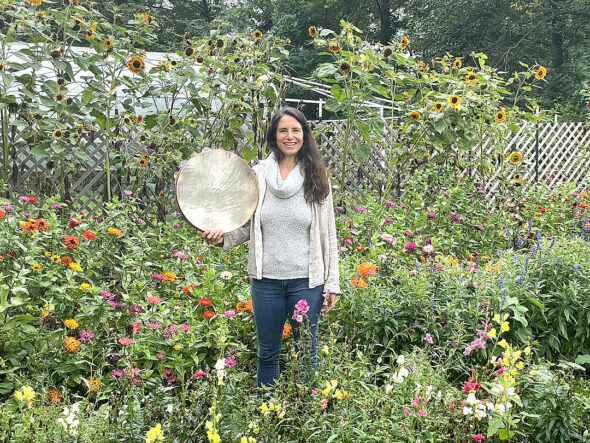 Nicole Manieri is pictured in the Heartbeat gardens with one of her many drums, handmade in Italy by Rocco Luca. (Photo by Cheryl Durgans)

‘Dance on the drum’ classes set

Residents may know Nicole Manieri through her herbal education work at Heartbeat Learning Gardens, a nonprofit farm and garden that she co-stewards along with her husband, Andrew, and their son, Gabriel, on the outskirts of town in Clark County.

Over the years, villagers have made the trek to their farm for workshops covering an array of ecological topics, and for a view of lushly tended gardens that feature an assortment of medicinal herbs.

But Manieri is also an accomplished musician and dancer. For the past 10 years, Manieri has studied a traditional southern Italian form of community drumming and dance called Tammurriata, or “Dance on the Drum,” and will be offering classes for five weeks through the Wellness Center at Antioch College on Tuesdays, from 6–7:30 p.m., beginning Aug. 30.

According to Manieri, dance the world over has been used to bring communities together, “to restore harmony, resolve conflict and process trauma.”

“Music is a language our bodies speak. It just works,” she said.

“Lowe is one of my deep friends, and we have a history of drumming and singing and moving together and being in intentional space together. She told me that they [the Wellness Center] were looking for different kinds of offerings that are more diverse, and she asked if I wanted to offer something there,” Manieri said.

Manieri said that up until Lowe contacted her, she’d been offering classes at the farm —“for the most part.” Challenged by the weather because of a lack of indoor space and wanting to introduce the art form to more people, Manieri decided to bring her class to the Wellness Center.

“I’ve been pretty secluded here [at Heartbeat], and so it might expose folks who are unfamiliar, who may really enjoy it, but have never known about it,” she said.

According to the class description, Tammurriata with “castanets in La Ronda (circle) and some drumming will be emphasized.” Manieri said she oriented the classes at the Wellness Center toward learning the dance with fun and ease and plans to offer more dance series after the initial five-weeks concludes.

“There’s no wrong way to do it, we’re just there to learn and engage. There’s different Tammurriata — after this one, I’ll do the next version in the winter, and if folks like it and want to continue, I can offer different variations. You can be a beginner, I will try to meet people where they are coming in because it’s meant for everybody, it’s meant for community — I want it to feel accessible,” she said.

According to Manieri, Tammurriata dances originated in the Campania region of Italy in and around the city of Naples and are meant “to celebrate cycles of seasons, fertility, spirituality, love and community.” All ages participate.

“In Sicily, the classes are very intergenerational, so you have people ages 20 to 70 doing these dances, and it’s all genders,” Manieri said.

Manieri is hoping to introduce the dance to people of diverse ages in the village.

“I would love that, I even hope that folks in high school, young people want to come. I think it’s a great outlet, it’s super fun, and it creates communications of the neural networks of the whole body to engage in rhythm and movement in concert, and activates all this intelligence of the body,” she said.

Manieri is also offering a second, more intensive five-week series at the Heartbeat farm on Husted Road called “Through the Gate,” beginning Thursday Aug. 30. She said it will include more choreography, harmonized singing and drumming and culminate with an Autumn Equinox performance at Heartbeat’s Community Day Celebration on Saturday, Sept. 24.

“It will be the same in that we’ll be learning the technical skills of Tammurriata, but we’re probably going to learn a song together, and some of it is going to feel more like a rehearsal — like an outdoor performance,” she said.

According to Manieri, the classes, while being fun and more collaborative, will be more serious and performance focused.

Manieri said that she’ll be playing with some of the mythic motifs from the Mediterranean region about the Autumn Equinox, “that time that they call Hades’ chariot,” when the door to the underworld opens. It’s where we do the deep work — like when all the energy goes down and in and underground, when we enter the dark to do that important work on the inside. And so, the theme, ‘we’re standing at that gate,’ and we have to face the threshold guardian,” Manieri said.

Manieri said the moment of entry is a type of heroine/hero’s journey connected to the threshold guardian, which symbolizes any thing or person that prevents the heroine/hero from moving forward toward transformation — from the old world to the new one.

“I am really playing with a very specific moment in the cycle of transformation. The threshold guardian is there, and is like, ‘Are you sure you want to do this?’ And so, you face your fears,” she said.

According to Manieri, there is a point in time in the journey when the threshold guardian can become an ally.

“And in the heroine/hero’s journey, the archetypal journey, the threshold guardian is there as an adversary until you turn it into an ally, and then it’s an ally for you on your journey — but there is a process you go through, facing your doubts, fears and all these things about what you think you want, but that you have to go into the underworld to retrieve. So, we are going to be kind of theatrically playing with that,” she said.

In some respects, Manieri’s healing journey through Tammurriata has some similarities to going “through the gate.” Manieri, who is of Italian heritage, said she discovered Tammurriata when she was undergoing a journey to heal ancestral trauma that began about 12 years ago.

“I was spending a lot of time in deep healing spaces and peer support group-like spaces where we were working on healing ourselves, healing in community together and building ways of recovering our fully embodied selves. That brought me into an awareness of my ancestors. And then, it was a sense of all this recovery — that I am doing of their stories, that I am doing the needed healing — that had me discover this living tradition of southern Italy, this remnant thread of rhythm, dance, song, prayer, in community, in devotion, in celebration, that is like this living thread from ancient times. And then I was like ‘OK, I am going to learn this ancestral medicine,’” she said.

Manieri first learned the traditional dance from Allesandra Belloni, who is based in the United States. Manieri then traveled to Italy for the first time in 2012 “to learn the healing drum and dance” with teacher Barbara Crescimanno in Palermo, Sicily, for more intensive training. Manieri said she “piddled” with it for about three years before getting more serious.

In 2020, during the early days of the pandemic, Crescimanno started offering online classes that Manieri took each week. She was eventually asked by Crescimanno to teach some classes and found them to her liking.

“I really enjoyed teaching it. When I went to Sicily, I got to learn even more Sicilian specific rhythms and just realized it’s a central part of my path in a way that before I just held it as a peripheral part,” Manieri said.

Manieri said she thinks of rhythm, dance and song as technology that aids the nervous system against dysregulation, or inappropriate response to life situations due to unresolved and unrelenting stress.

“Rhythm, dance, song in communities the world over is a technology that just works for humans in our ancient biology. Being able to contact an ancestral practice that can be of service to our nervous systems in these times just feels like something I can do,” Manieri said.

“I think that [technology] goes along the lines probably of the nervous system and regulation and the ways our ancient selves discovered methods for regulating. For instance, when a trauma happens, that’s energy that is bound up in the nervous system that in a healthy nervous system or a healthy culture there are ways of releasing and moving through, ways of metabolizing. So, I consider that a technology, that is a cultural technology of how we maintain vitality, how we maintain relationship with ourselves and each other,” she said.

Manieri discovered Tammurriata as a source of nervous system regulation.

“On a basic level, rhythm, movement in community and song, is a way to regulate the personal body, the soma of myself. In community it’s that mechanism of support inside a larger cultural body that’s completely dysregulated,” she said.

According to Manieri, Tammurriata is also one of her resources for healing lineage, or generational trauma, or a traumatic event that occurred in a family well before a person is born, but that still impacts that person’s life.

“I am aware of the trauma of my lineage, but am also aware that there is a resource there. And in my excavation process to find rhythmic patterns that my ancestors used to heal and to restore harmony in community, and with the earth, and that there is an unbroken line,” she said.

“It was just an incredible discovery for me, and when I discovered I had a knack for learning it and teaching it, then it felt like a responsibility,” she said.

Manieri’s five-week classes at the Wellness Center are $20 a class for members, $25 for nonmembers. Proof of vaccination is required. The Autumn Equinox performance classes at Heartbeat are $150 for five weeks.